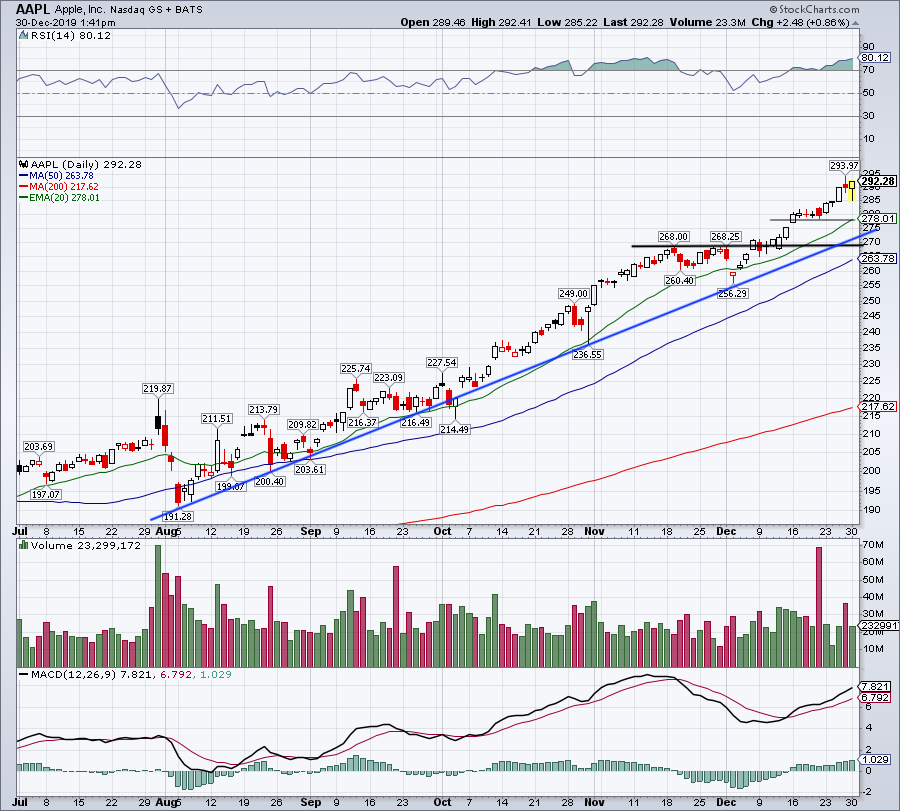 For the first time in weeks, we finally got some selling pressure in the broader market. Buyers did step up to bid equities off the lows, but the pullback was the first notable selling action we’ve had in a while. Let’s look at some top stock trades as well.

It looked like Apple (NASDAQ:AAPL) was finally starting to peter out. It ran out of gas on Friday, hitting a new all-time high and reversing lower. The stock opened lower on Monday and sold off, down to $285.

Buyers stepped in just like they did for the broader market on Monday. Only unlike the U.S. stock market, Apple stock surged higher on the day, nearly hitting a new all-time high in midday trading.

So what now? I still wouldn’t be surprised to see this name hit or even clear $300 ahead of earnings later next month. But a 100% rally inside a calendar year and a gain of roughly 54% from the August lows is simply too much, too fast.

Eventually Apple stock will need to pull back.

Whether that’s down to the latest gap-and-consolidate level near $280 or the rising 20-day moving average, I’m not sure. In each month since September, dips to the 20-day moving average have been aggressively bought by investors. Falling below that mark puts uptrend support (blue line) on the table.

Below that and hitting the 50-day moving average is possible. 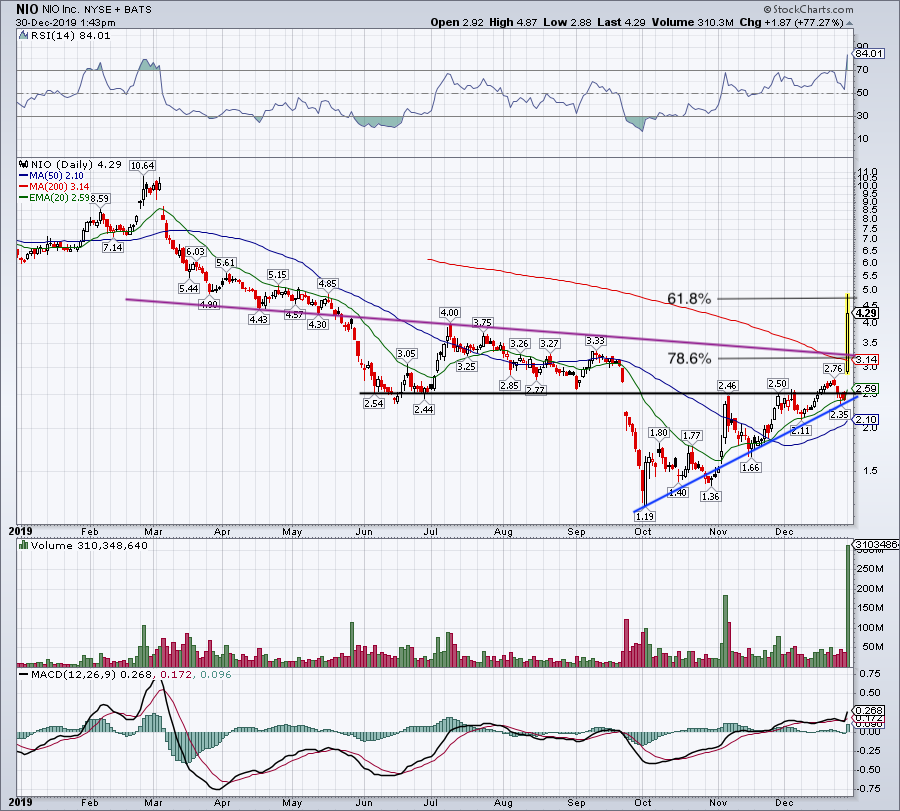 Wow. That’s all I can say about Nio (NYSE:NIO), which was up 100% on Monday at its highs. Has the game changed for Nio after its better-than-expected earnings report?

The stock hit a low of $1.19 in October and has been putting in a series of higher lows since. That has formed an uptrend support mark (blue line). Nio was even breaking through the $2.50 mark, although it was stuck at this area ahead of earnings.

Essentially, it was a coin toss. Good earnings would ignite the stock. Poor earnings would send it back to $1.50 and possibly lower. Luckily for bulls, it was the former, with shares igniting over various resistance levels and reclaiming the 200-day moving average. 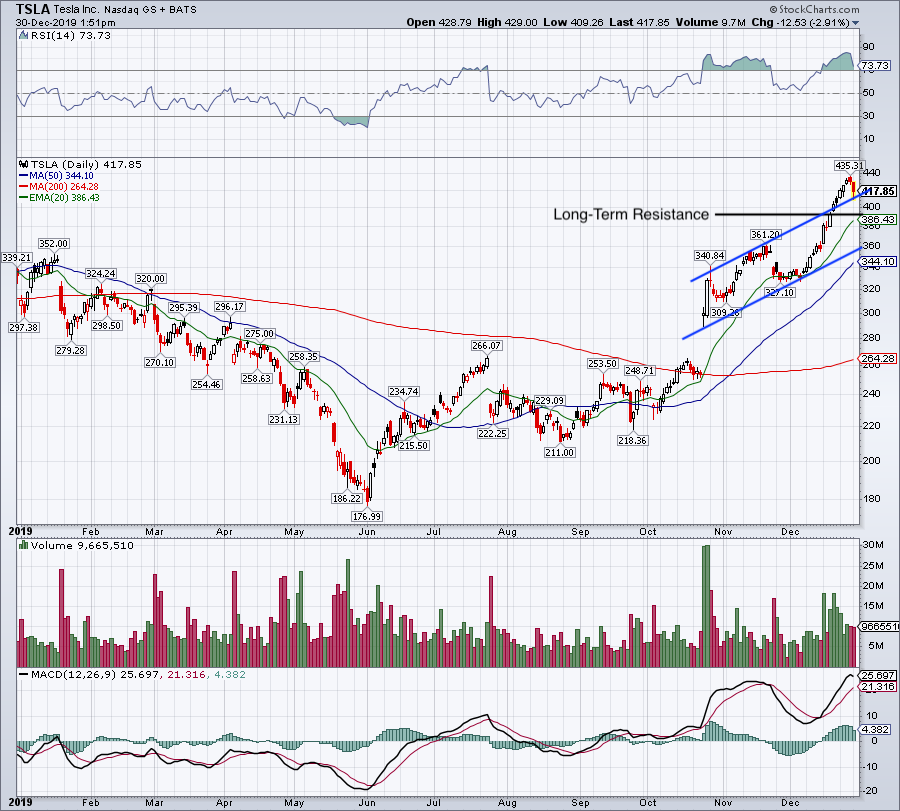 Like Apple, Tesla (NASDAQ:TSLA) hit a new high on Friday before closing lower in the session. Unlike Apple, though, Tesla sellers hit the stock hard on Monday, with shares sinking more than 4% at one point.

Is the run over? Not quite. Or if it is, it’s not apparent yet.

Earlier this month, shares broke out over channel resistance (blue line). On Monday, this former resistance mark acted as support, as buyers bid Tesla off the lows. That said, I wouldn’t be surprised if sellers pushed it lower from here.

Multiyear resistance was in play between $380 and $390, until Tesla broke out over it in December. So some kind of decline down into the $380 to $400 level wouldn’t be a surprise at this point. That’s particularly true given the psychological significance of the $400 price and with the rising 20-day moving average near $386.50.

If Tesla does pull back this far and doesn’t find support between $380 and $400, look for channel support and the rising 50-day moving average to buoy the name. 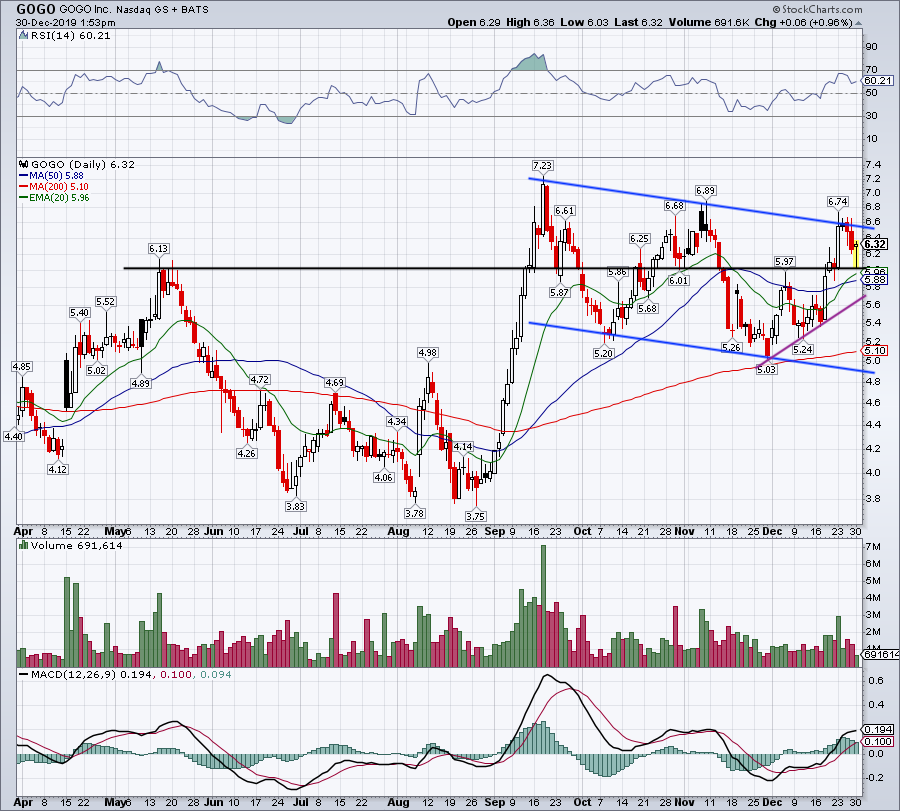 Each of the names above have had a rather lengthy discussion. Not Gogo (NASDAQ:GOGO) though.

The stock bounced off its 200-day moving average in late-November and has been putting in higher lows since (purple line). Gogo has also reclaimed its 20-day and 50-day moving averages, while Monday’s pullback was quickly gobbled up by buyers near $6.

Keep in mind, Gogo will be a bumpy ride. But if the stock can break out over channel resistance (blue line) and take out the recent $6.74 high, it could gain serious momentum.

On the downside, watch uptrend support (purple line). Below it means Gogo has broken trend has lost its short-term moving averages. That will put the 200-day moving average on watch, as well as channel support.