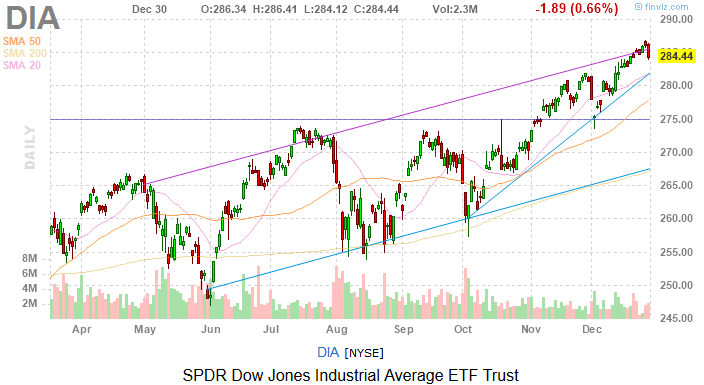 Yes, there’s one more sort of trading day left in the form of New Year’s Eve, but participation will likely be light tomorrow, meaning it will be difficult to overcome today’s losses at the hands of concerns that equities have become overbought.

Losses are never pleasant, but going back to last week, the three aforementioned equity benchmarks were on stellar runs this month, indicating that today’s pullbacks could very well be the case of near-term overbought conditions and can be seen as healthy standard operating procedure.

Perhaps adding to the surprise Monday malaise on Wall Street was White House trade adviser Peter Navarro saying in an interview with Fox News that the initial part of a trade accord with China is a done deal. Of course, markets have known this for weeks, so when it comes to positive trade news with China moving stocks in the new year, it’s likely going to have come from another phase of a trade deal, something that doesn’t appear likely in the near-term.

Still, Monday was rough day to go into 2020 as all but one (Apple) of the 30 Dow stocks were in the red in late trading, the poorest ratio to be seen in months.

If not for Apple, things would have been far worse for the Dow Jones today. Although Apple has been on a monster run this year, analysts haven’t been shy about endorsing the iPhone maker as a winner for the year ahead.

Today, Gene Munster of Loup Ventures said Apple will be the best-performing member of the FAANG quintet next year, which is meaningful because he said in late 2018 about Apple and, obviously, his call was proven accurate.

A Positive View On Intel

Semiconductor giant Intel (NASDAQ:INTC) wasn’t among today’s Dow winners, but analysts see promise ahead for a solid-though-not-spectacular 2019 performer. In a note out today, Morningstar highlighted Intel’s 2017 acquisition of cybersecurity firm Mobileye as a potential driver for the shares in 2020.

“Since Intel acquired Mobileye in 2017 for $15.3 billion, the leader in advanced driver-assistance systems, or ADAS, has been steadily increasing its annual design wins while growing revenue at a healthy double-digit rate,” said the research firm. “The firm is on track to surpass $1 billion in sales in 2020, and we believe it will approach $3 billion by 2023, which supports our assumptions of mid-single-digit revenue growth for Intel as a whole.”

Although Merck (NYSE:MRK) was also among the Dow losers today, the pharmaceuticals name was on the receiving end of some good news as the Food and Drug Administration (FDA) approved the company’s cancer treatment, Lynparza. Merck developed that drug in partnership with AstraZeneca (NYSE:AZN).

“Lynparza is part of a class of drugs known as PARP inhibitors, which work by stopping DNA from repairing itself, halting the growth of tumors,” according to Barron’s. “The approval of Lynparza to treat pancreatic cancer will likely help reinforce the drug as the leading PARP inhibitor.”

IBM (NYSE:IBM) lost nearly 2% today to rank as the worst-performing name in the Dow. Although the stock is up 19% year-to-date, it’s still lagging the Dow and S&P 500 by wide margins.

IBM is a legitimate candidate for a bounce back showing in 2020, but the company needs to be more than a buyback hotel, meaning investors want growth, particularly growth that can be sourced to the Red Hat purchase made earlier this year.

With just one trading day left in 2019, now is as good of a time as any to examine fun historical trends. The one I’m looking at is how stocks perform in years following strong December showings, which we have been treated to this month even with Monday’s retreat.

Historical data indicate there is some carryover effect following a strong December and that impact is often recognized as soon as January as well as on an annual basis in the following year. Of course, past performance isn’t guaranteed to repeat.