Last year turned out great for equity investors as the S&P 500 rose 30%. However, for much of the year it was rough sailing as there were panic moments over headlines. Some spaces like semiconductors were especially exposed to China, and therefore particularly vulnerable to trade war headlines. But despite all the challenges that chip stocks had in 2019, Wall Street investors bought every dip.

The setup for 2020 resembles that of last year’s. The bulls are still in charge and the favorable macroeconomic conditions are looking like they will persist. The central banks are still committed to easy lending conditions, and mega caps are delivering strong results. So in order for the bears to overwhelm this bullish market they will need new scenarios to emerge. So past winners like Advanced Micro Devices (NASDAQ:AMD), Intel (NASDAQ:INTC) and Nvidia (NASDAQ:NVDA) will continue to win.

So after a great 2019, the idea is to roll the profits into 2020 inside a bullish sentiment for business. Last year, the markets struggled with global headlines about tariffs and more. Yet, companies still managed to deliver great results; therefore, it will take a black swan event to derail this bullish market. 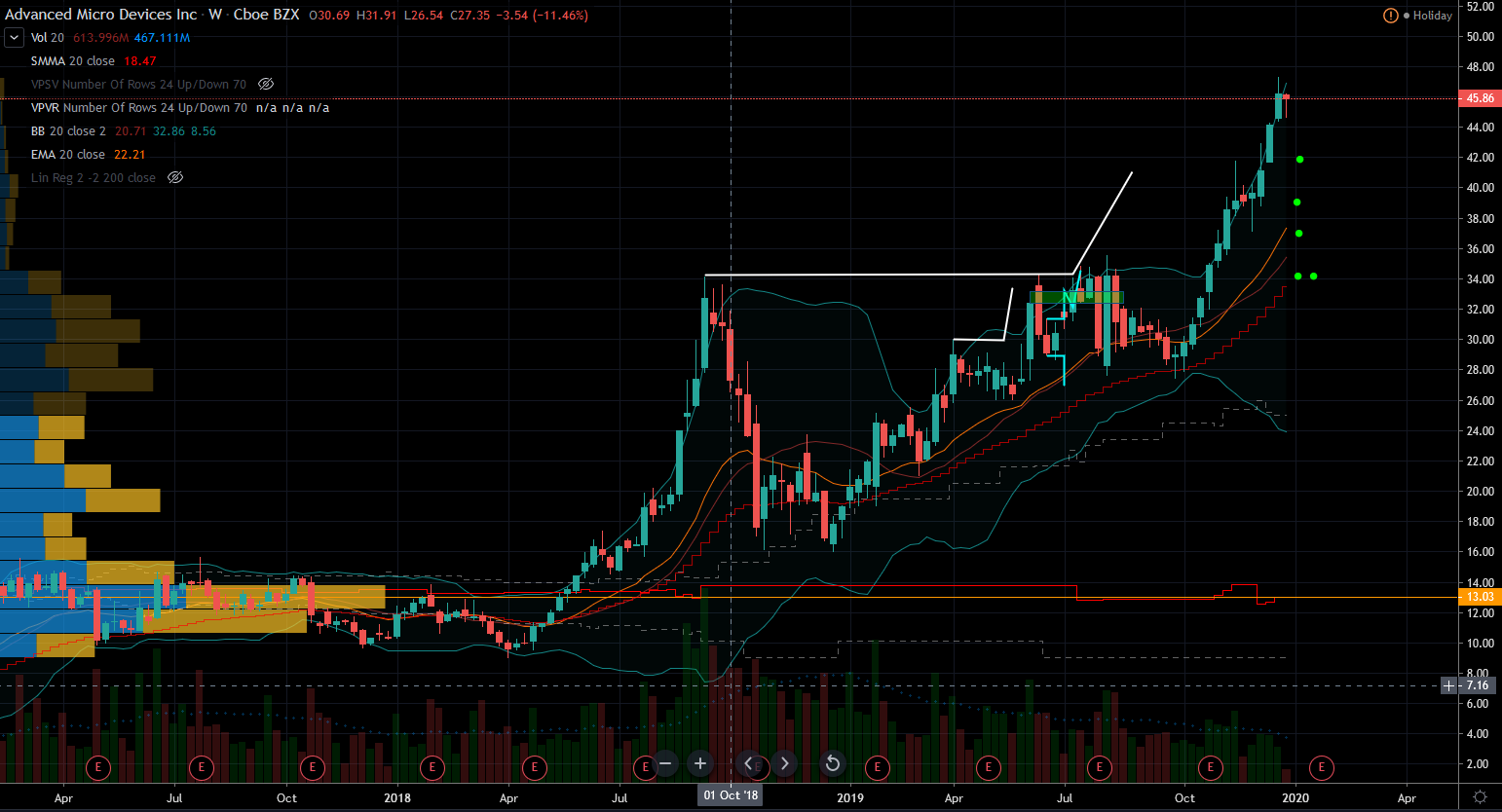 AMD was the best performing stock in the S&P two years straight. The odds for repeating once are low, so a third time is almost impossible to pull off. Meaning that from this perspective, AMD stock is the least likely to outperform in 2020.

But I also like to bet on winners. So until AMD shows me weakness, I stick with it as a great choice for 2020. This is a strong stock because Wall Street strongly believes in its CEO Lisa Su. If this situation changes, then the selling will happen very fast.

So, the stock ascent being this fast, I can argue that there will be better entry points into AMD. Meaning new entries into it here are vulnerable to losses in the next two months. If it falls to the areas around $39 and $36 per share it would shake out enough people to make a much better new entry point. The base after a very steep rally is usually shaky and makes for a poor springboard.

I am not saying that AMD stock is a good short because it is not. In 2018 when the equity markets were falling into an abyss, AMD closed the year up 50%. This year was even better. So the easy trade on AMD is to stay long it into 2020 but from better starting points.

Fundamentally, AMD is not cheap. But value is not very important for a stock like this. It gets a pass on valuation for as long as its thesis is that management is setting it up for awesome profits in the long run. 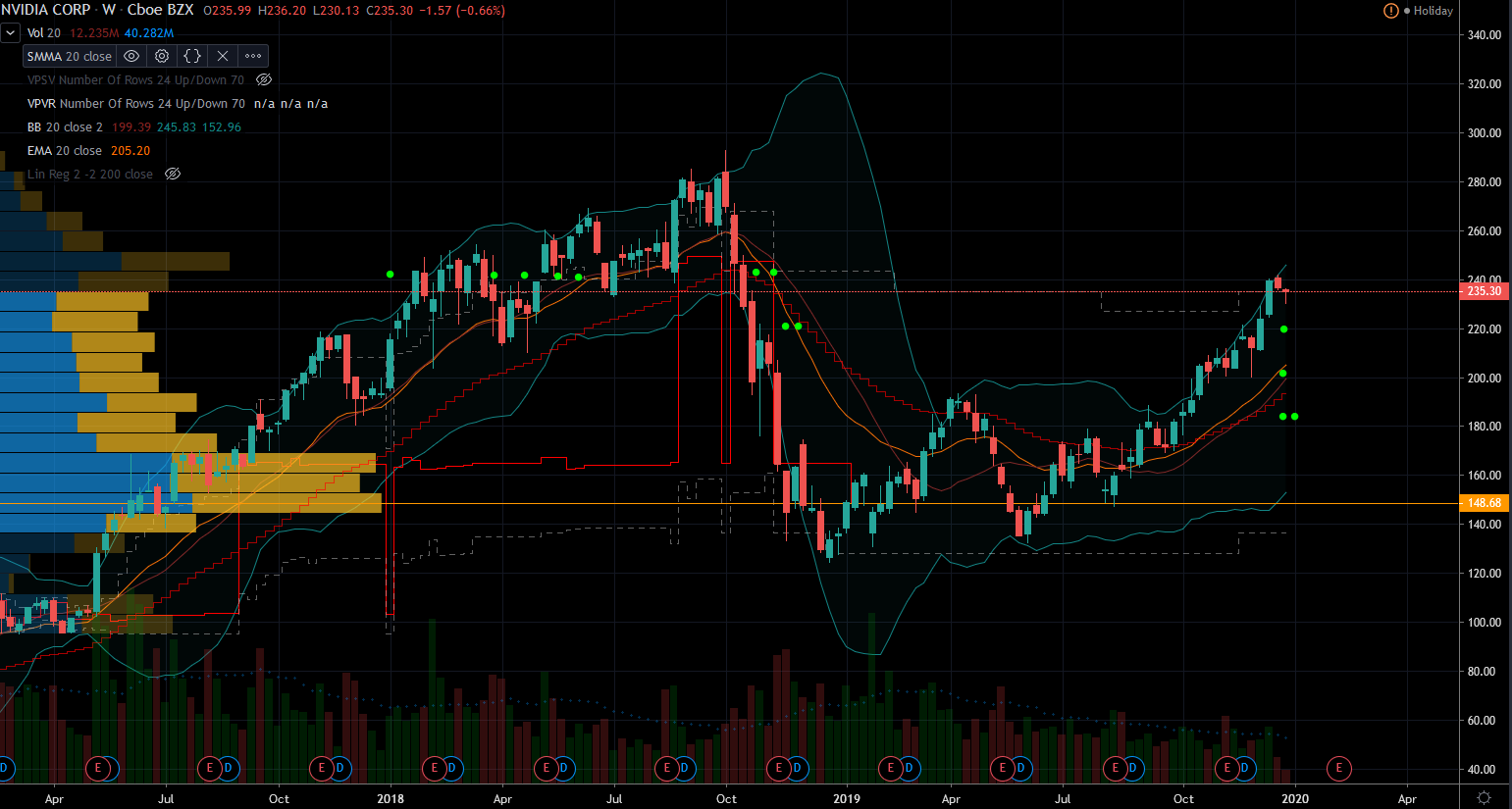 For a long while and coming into Fall 2018, NVDA stock could do no wrong. Consensus then was that it had to be in every portfolio. The experts drooled over its forays into several areas, including bitcoin. But then, as the crypto craze faded, Nvidia stock corrected hard as it fell almost 60% before it bottomed at $125 per share on Christmas of 2018.

This past Christmas was the opposite result. NVDA rallied 80% from its May lows to salvage a great year. So barring a management flub, the momentum could carry it on higher still from here. Indeed, the Wall Street experts are back on the Nvidia stock band wagon and perhaps too much once more. And therein lies reason for caution.

This recent increase in conviction should make the bulls nervous. At least until they shake out a few weak hands. So don’t confuse my point here with disliking its fundamentals. I just am leery of the speed by which consensus swung from one extreme to the other. Somewhere in the middle lies a better slope. 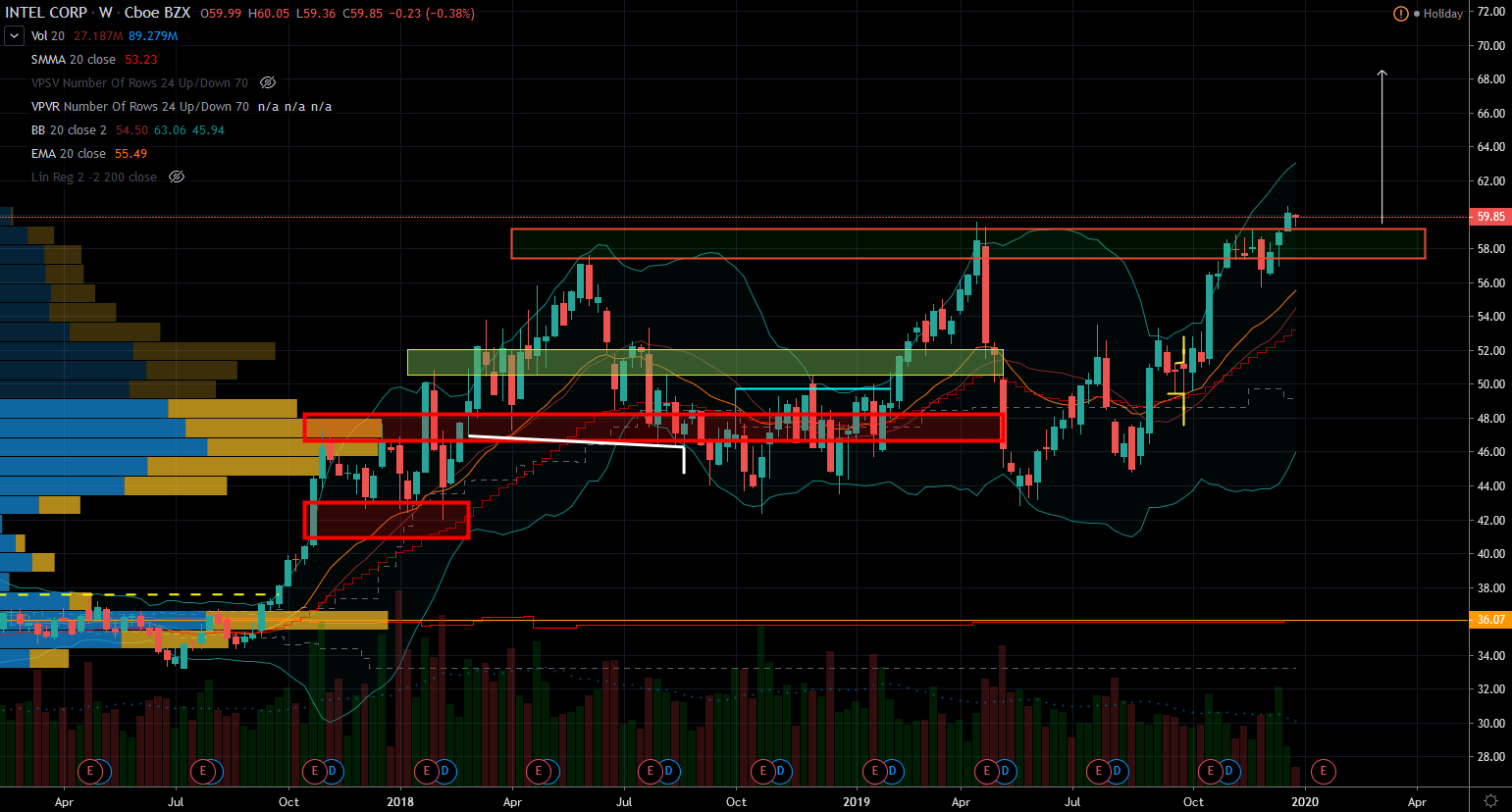 Of the three stocks today, Intel has the clearest technical opportunity. All year long it has played catch up. This was probably the result of the churn in leadership. But now it is in sync and trading well.

Intel’s chart now resembles AMD’s back in October just before it broke out from $34 per share. The rally was massive for AMD and it could be just as impressive for INTC soon.

If the bulls can breakout and establish $60 per share as a base then the measured move would be to reach $69 per share area. But the first step is to solidify this breakout and retest the neckline for footing. This task will be easier to accomplish if the whole market starts the year with greens.