The escalating tensions between the U.S. and Iran was really the only thing investors were talking about in the stock market today.

The SPDR S&P 500 ETF (NYSEARCA:SPY) took an early hit of 1%, its biggest drop in a month, as investors tried to sort out the ramifications. The Middle East it seems, still drives stocks. But it’s not the same landscape that it used to be.

Ultimately, the SPY fell 0.75% while oil prices settled higher by 2.3% after the U.S. killed one of Iran’s most powerful leaders, Qassem Soleimani. President Donald Trump ordered an airstrike that hit Baghdad International Airport after the siege of the U.S. Embassy and other recent attacks.

Here’s What Moved Thanks to Iran Tensions

When tensions like this flare up, particularly in the Middle East, there are certainly assets and stock classes to look at first. While oil gets the immediate attention, it doesn’t play the role that it used to. Meaning that, the U.S. produces so much oil and is prepared to produce even more, that any possible disruptions in the Middle East should have a muted impact on the U.S. economy.

That’s good for U.S. equities, as the economy’s largest driver — consumers — shouldn’t suffer too much of an impact. Of course, that changes if oil goes on a prolonged rally, but as it stands, we won’t need to wait in line at the gas station this weekend.

Then there’s gold, which tends to rally when tensions flare up anywhere. The yellow metal jumped 1.5% on Friday and continues its big run. There’s also defense stocks, several of which were breaking out and hitting new 52-week highs on the day. That includes Lockheed Martin (NYSE:LMT) and Raytheon (NYSE:RTN). 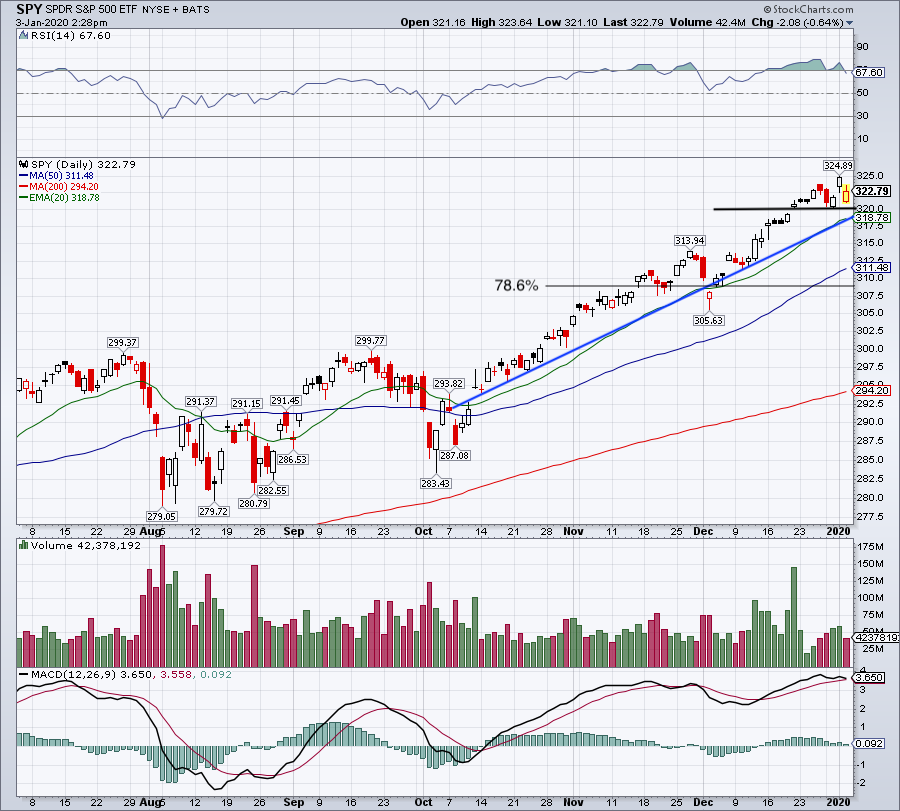 Above is a look at the SPY exchange-traded fund. It’s pretty clear that the market has been red-hot and Friday’s action does little to dislodge that fact. Is the rally over? It’s impossible to say, but at least for now, the answer is: not yet. Still above uptrend support (blue line), the 20-day moving average and $320, it’s hard to get too bearish.

Like we said the other day, there’s nothing wrong with traders locking in some profit and/or raising stop losses. Below the 20-day moving average and the sentiment shifts more cautious. But for now, the market remains pretty stable. Let’s see how next week develops.

Movers in the Stock Market

Luckin Coffee (NASDAQ:LK) is giving Starbucks (NASDAQ:SBUX) a run for its money, with officially having the most outlets open in China. Luckin passed Starbucks in 2019, which has been dominating China’s coffee scene, with more than 4,500 locations open.

Tesla needed to deliver about 104,000 vehicles to achieve its outlook of 360,000 to 400,000 vehicle delivered in 2019. The company plans on continuing to grow that number with help from its new Shanghai facility, which reportedly has the means to produce more than 3,000 units per week.

Because Tesla was a relative strength leader on Friday, it made the Top Stock Trades list.

Unlike Tesla, General Motors (NYSE:GM) traded lower Friday, falling 2.8% as Q4 deliveries fell 6.3% to 735,909. While that figure represents a year-over-year decline, the strike-impacted results were in line with expectations.

Incyte (NASDAQ:INCY) was down almost 10% Friday, after the company’s itacitinib treatment failed a Phase 3 trial. According to the market though, Equilium (NASDAQ:EQ) is the benefactor. While shares initially jumped more than 10%, the stock pared back its gains to “just” 7.6%.

A lingering concern? December’s ISM manufacturing index came in at 47.2, well below estimates of 49.1 and 48.1 in the prior month. It’s the weakest reading since June 2019 and marks its fifth straight decline.