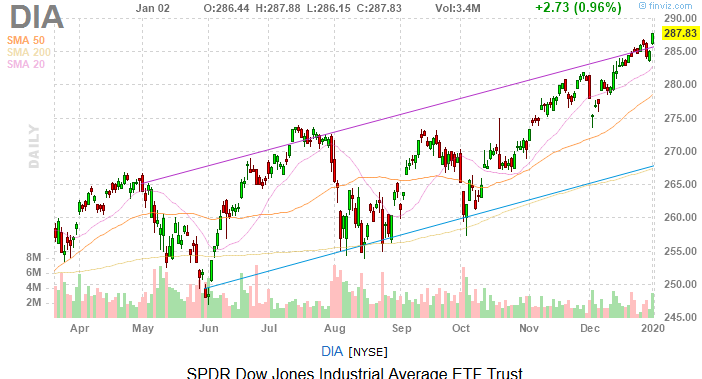 It’s too early to tell if the new decade will be this century’s equivalent of the “Roaring ’20s,” but stocks started the new year in much the same way they ended 2019: on an upbeat note.

On a related note, much of the ebullience to start the new year was attributable to familiar leadership fare as all of the Dow’s technology stocks were trading higher today.

Speaking of familiar themes, on a day when news flow was light in the U.S., China helped global equities higher after the central bank there said it would increase access to cheap financing for the country’s financial institutions. On a related note, President Trump remains optimistic that the U.S. and China will sign Phase I of the oft-discussed trade compact this month and perhaps start discussions on the next phase.

There’s obviously a long way to go in 2020, but Apple (NASDAQ:AAPL), 2019’s best-performing Dow stock, is off to an excellent, gaining 2.2% on the first trading day of the new year.

Conventional wisdom often dictates that a prior leader’s usually don’t retain that status in the following year, but that Apple may not be conventional in that regard. The stock gained 86.16% last year and asking for repeat performance in 2020 may be asking a lot, but Apple certainly has the ingredients and leadership to make 2020 another rewarding year for shareholders.

For today, Apple’s gains were largely attributable to the aforementioned liquidity injection in China and news that of the imminent trade deal signing.

Disney (NYSE:DIS) gained a tidy 32% last year and was back at it today, jumping more than 2%. Last year’s familiar catalyst of Disney +, the company’s newly minted streaming service, greased the stock’s wheels today.

Specifically, Rosenblatt Securities analyst Bernie McTernan said in a note out today that a recent survey indicates Disney+ has acquired a massive number of subscribers in a short amount of time.

“McTernan estimated that Disney+ had 25 million subscribers as the first quarter of its 2020 fiscal year closed on Tuesday, up from his previous call of 21 million. Disney will likely report its results for the quarter in early February,” according to Barron’s.

It has been awhile since industrial conglomerate United Technologies (NYSE:UTX) was highlighted in this space, but the stock was one of the top performers in the Dow today. As has been widely noted, there are lot of moving parts with UTX stock, including previously announced spinoffs of its non-core segments, including Otis (elevators and escalators) and Carrier (HVAC) as well as the Raytheon (NYSE:RTN) merger.

It took investors a while to digest all those moves, but there a couple of important reasons why UTX could be a winner in 2020: earnings are expected to grow and the stock trades at a tempting 17x earnings, indicating it’s not richly valued despite strong EPS growth forecasts.

Along For The Ride

Advanced Micro Devices (NASDAQ:AMD), one of last year’s best-performing names from the hot semiconductor space, hit a record high and dragged rival and Dow component Intel (NASDAQ:INTC) along for the ride.

Waiting on the Dogs

Several of the Dow’s 2019 disappointments, a.k.a. The Dogs of the Dow, such as Dow Inc. (NYSE:DOW) and Verizon (NYSE:VZ), were among the index’s losers today, indicating it could take awhile for the Dogs of the Dow theory to kick in this year.

One thing to consider, and it’s relevant because we’ll soon be treated to the last major economic data points of 2019, is that economic growth in the U.S. is likely to cool this year, but that doesn’t dent the case for equities.

“While the odds of a near-term recession appear to have diminished, growth is projected to slow in the coming quarters due to a weaker global outlook and reduced global trade flows,” notes FactSet. “U.S. economic growth is expected to continue to slow into 2020, with analysts surveyed by FactSet projecting 2.3% annual growth in 2019 followed by 1.8% in 2020.”