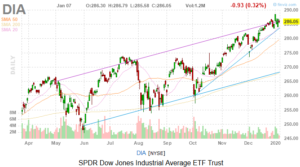 Broadly speaking, Tuesday was another sluggish day for riskier assets. The dollar rose and oil declined as many market participants wait to see what happens next in the intensifying showdown between the U.S. and Iran.

By no means was it a terrible Tuesday despite the fact that 23 of 30 Dow Jones stocks were lower in late trading. There was some other good news, albeit on an anecdotal level, including that of a well-known market forecast that has notoriously been reluctant to endorse higher S&P 500 targets finally coming around.

“Francois Trahan, head of U.S. equity strategy at UBS Group AG, raised his year-end target for the S&P 500 Index to 3,250 from a previous target of 3,000 set in November,” reports Bloomberg.

Trahan’s prior call of 3,000 was one of the lowest on Wall Street.

In economic news, the U.S. trade deficit declined by about $43.1 billion in November due in large part to the trade war with China.

“The deficit with China decreased $2.2 billion in November to $25.6 billion owing to a $1.4 billion increase in exports and an $800 million decline in imports,” according to CNBC.

With that, let’s have a look at some of Tuesday’s winners and losers.

Another Up Day For Boeing

Boeing (NYSE:BA) added to Monday’s gains, jumping as much as 1.38% today after the company said it’s recommending pilot simulator training for those who will fly the 737 MAX jet, when that controversial plane finally gets airborne again.

“This recommendation takes into account our unstinting commitment to the safe return of service as well as changes to the airplane and test results. Final determination will be established by the regulators,” said the company in a statement.

There’s also a rumor floating around that Warrren Buffett’s Berkshire Hathaway (NYSE:BRK-A) is building a position in Boeing. That coupled with the Iran drama boosting defense stocks are factors helping Boeing start 2020 on a strong note.

Johnson & Johnson (NYSE:JNJ) still faces an array of courtroom issues this year, but the company appears to have put at least one element of that to bed amid news that a California talc trial has been halted after the judge told jurors a settlement has been reached. Shares of JNJ posted a modest gain.

Aside from Boeing, the Dow’s other industrial names — Caterpillar (NYSE:CAT), 3M (NYSE:MMM) and United Technologies (NYSE:UTX) — were stung today by another slack manufacturing data point.

“Latest data showed new orders for U.S.-made goods fell in November, pulled down by steep declines in demand for machinery and transportation equipment, pointing to sustained weakness in manufacturing,” according to Reuters.

Should Caterpillar and 3M be Dow laggards again, that puts some burden on Boeing to carry the Dow’s industrial exposure and for other groups – namely technology – to prop up the blue chip index this year.

I noted yesterday that fourth-quarter earnings are a potential catalyst or trouble spot for stocks over the near-term and while it’s not a marquee report, investors will get an earnings taste from Dow component Walgreens Boots Alliance (NASDAQ:WBA) when the pharmacy operator reports quarterly results tomorrow.

Wall Street expects WBA to earn $1.41 per share on sales of $34.6 billion. Remember, WBA was one of the worst-performing names in the Dow last year, so this report could go a long way toward bolstering sentiment on the stock.