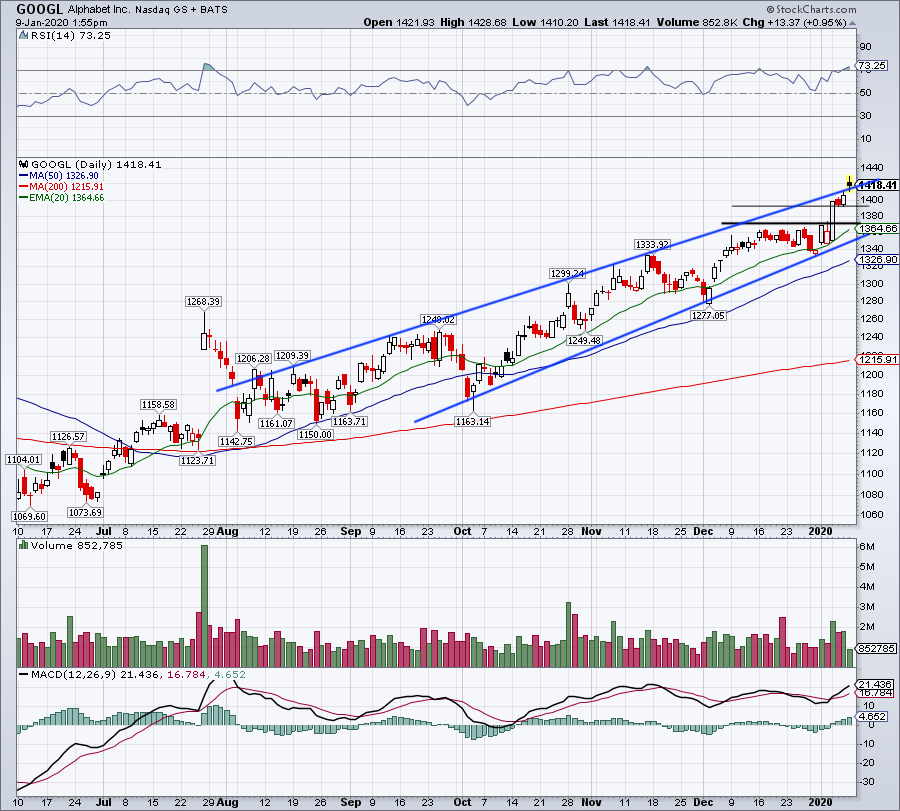 The markets showed more resilience on Thursday, with many mega cap stocks and all three major U.S. indices hitting all-time highs. Let’s look at a few top stock trades as a result.

Shares of Alphabet (NASDAQ:GOOGL, NASDAQ:GOOG) were among those hitting new all-time highs on the day, as shares gapped up and hit $1,428.68. It also gapped up over channel resistance.

Bulls will want to see GOOGL stock grind along channel resistance, finding the mark as uptrend support. Should the stock keep rallying into earnings, it puts bulls in a tough spot, as expectations will be very high.

That said, the rally to new highs in December went on to consolidate for several weeks before again bursting higher a few days into 2020. In other words, the latest rally came after a pause, so the move hasn’t been too steep. On a pullback, let’s see if the $1,395 to $1,400 area can buoy GOOGL. Below puts the 20-day moving average and uptrend support in play. 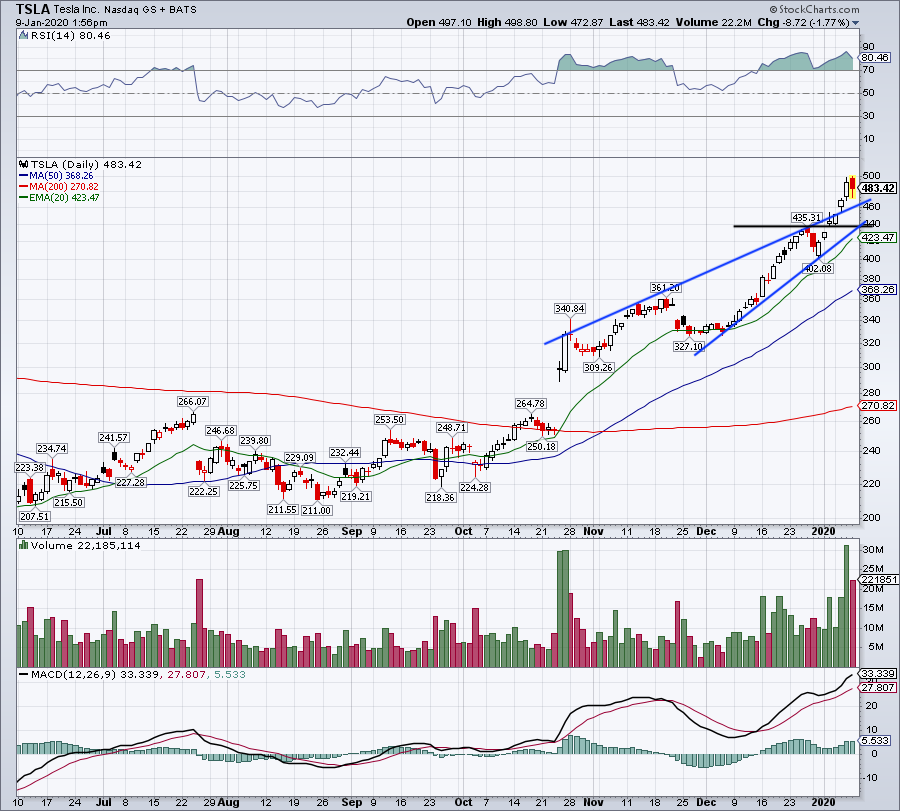 Tesla’s run has been insane and the stock is certainly extended right now. With today’s gap-and-retreat action, we have a potential top in place. The question now is, will it be a long-term or short-term top?

Those that were active in the session may have used the break to negative territory as an opportunity to get short. Their stop-loss — and a number of other traders too — likely sits up at $500. Over $500 and they will likely be stopped out, but if shorts can crack Wednesday’s low at $468.23, it could kickstart a flush lower. 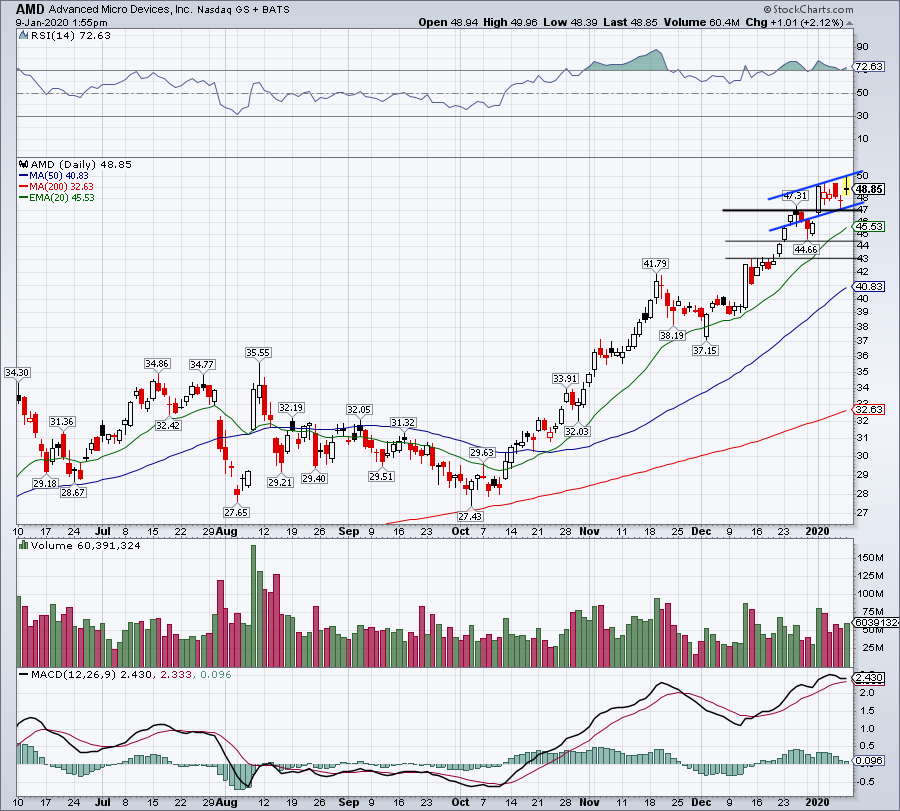 Advanced Micro Devices (NASDAQ:AMD) is similar to Tesla. The stock came within pennies of a psychologically important level — $50 in this case — and has been on a sick run.

If it can haul itself over $50, momentum may continue for the bulls. A break of $47 puts it below short-term range support (black line) and channel support (blue line). That puts the 20-day moving average and the $44.50 level on watch.

Keep it simple: Watch for it to get above resistance or below support, then go from there. 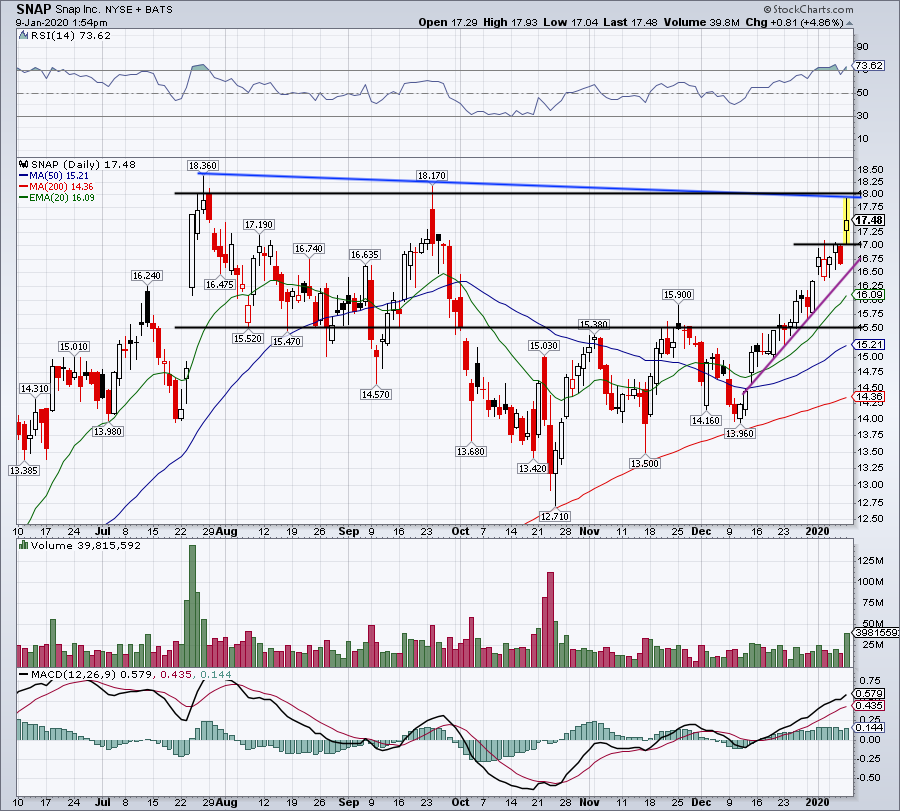 Shocking where resistance came into play for Snap (NYSE:SNAP), isn’t it?

Once the stock broke out over $15.50, a rapid ascent was underway. However, the $18 level remains stiff resistance for Snap, as shares were greeted by sellers.

Below $17 and investors will have their eyes on uptrend support (purple line). If that fails as support, look for the 20-day moving average to buoy Snap. Over $18 puts the 2019 high of $18.36 on the table. Above that and Snap can gain momentum. 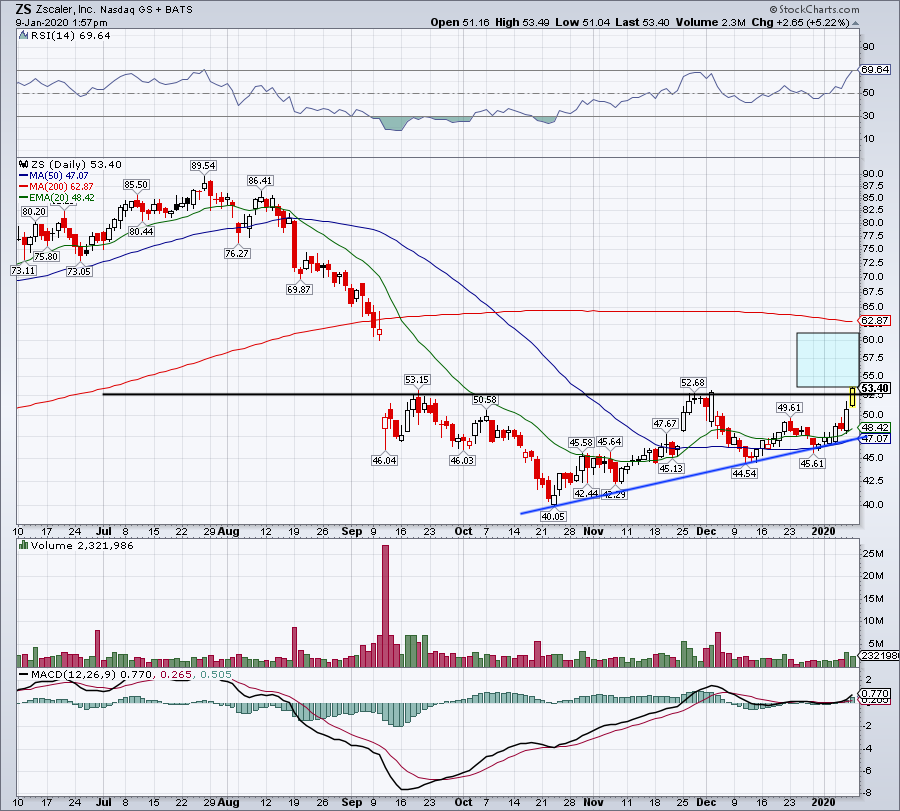 Zscaler (NASDAQ:ZS) was a big IPO winner last year, but when growth stocks fell out of favor, so too did ZS.

The stock was under strong selling pressure in August and September, while halfway through the latter month and shares were crushed lower on a vicious gap down. Zscaler eventually bottomed in October.

From that low, shares have been putting in a steady series of higher lows (blue line), while resistance sat firmly near $53. That set up the stock in an ascending triangle pattern, a bullish technical development.