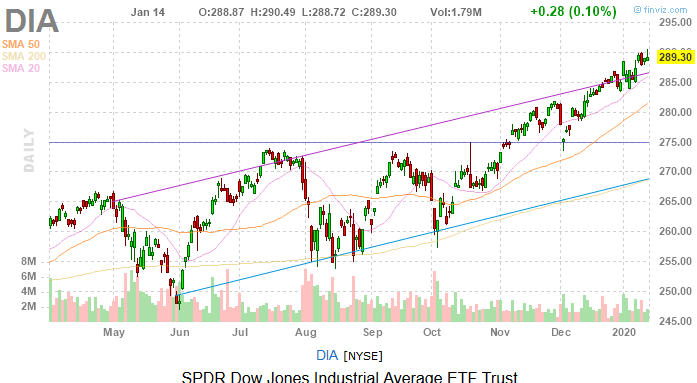 Considering that some of the banking industry’s marquee names reported earnings today, it was a mostly sluggish Tuesday as stocks waned near all-time highs even amid some good vibes on the trade front.

As noted yesterday, the U.S. and China are scheduled to sign Phase I of a trade agreement tomorrow, but today, the White House said tariffs already in place on Chinese imports will remain in place until after the November elections.

The package to be inked on Wednesday “will reportedly commit China to buying some $200 billion of U.S. goods, as well as respecting intellectual property rights and not manipulating its currency,” according to Bloomberg.

Geopolitical observers see the trade deal as a win-win for both sides with Chinese President Xi Jinping emerging from the flap with a better of understanding on how to work with President Trump. Whether that facilitates a move forward on more advanced trade talks remains to be seen, but that is something Trump has previously mentioned and it’s likely he’d want to use trade successes with China to his benefit on the campaign trail later this year.

Amid all the trade conjecture, 18 of 30 Dow stocks were higher in late trading.

As noted above, JPMorgan Chase, the largest U.S. money center bank, was the Dow’s top performer today after it reported fourth-quarter results that easily topped analysts’ estimates. For the quarter ending Dec. 31, JPM said it earned $2.57 a share on revenue of $29.2 billion. Wall Street expected earnings of $2.36 on revenue of $27.9 billion.

“While we face a continued high level of complex geopolitical issues, global growth stabilized, albeit at a lower level, and resolution of some trade issues helped support client and market activity towards the end of the year,” said JPM CEO Jamie Dimon in a statement.

JPM’s fourth-quarter ebullience was well diversified as it retains its perch as the top global investment banker in the quarter while seeing expansion in its consumer businesses as well. The results were also boosted by an impressive 86% surge in fixed income trading.

Pfizer (NYSE:PFE) was one of the Dow’s laggards last year and there is relevant debate about just how much investors should expect out of the pharmaceuticals giant this year, but the stock gained 1.56% today. The company reached a deal with Insilico Medicine to use that company’s technology in high-tech fashion to identify new therapeutics.

Pfizer will “utilize Insilico’s machine learning technology and proprietary Pandomics Discovery Platform with the aim of identifying real-world evidence for potential therapeutic targets implicated in a variety of diseases,” according to a statement.

Disney (NYSE:DIS) gained 0.92% today, ranking in the upper tier of Dow stocks after Sensor Tower said in a report out earlier Tuesday that the Disney + streaming service has been downloaded over 41 million times from the App Store and Google Play and that the Disney service is getting favorable customer reviews.

Remember, Disney + is just over two months old and this point confirms the company is going to be a major streaming player.

Somehow, some way, Boeing (NYSE:BA) closed higher today despite some discouraging news flow. Thanks to the ongoing controversy with the 737 MAX jet, the company has ceded the crown of top deliverer of planes in the world to rival Airbus.

The company pushed back the return to air date for the plane to June and is reportedly offering substantial discounts on the jet to entice buyers.

Add to all that, Moody’s Investors Service said late Monday it’s putting Boeing’s corporate credit rating, currently A3, on review for a possible downgrade. Heightening those concerns is the fact that Moody’s lowered its rating on Boeing supplier Spirit AeroSystems (NYSE:SPR).

In a vacuum, Tuesday obviously wasn’t a good day nor was it an alarmingly bad day for stocks. With fourth-quarter earnings season here and slated to get much busier over the next few days and couple of weeks, the issue at hand is whether S&P 500 companies can deliver results and guidance that merit some of the high multiples some stocks currently sport.

The fourth-quarter bar shouldn’t be hard to clear, but market participants may have stricter requirements for corporate commentary on 2020.