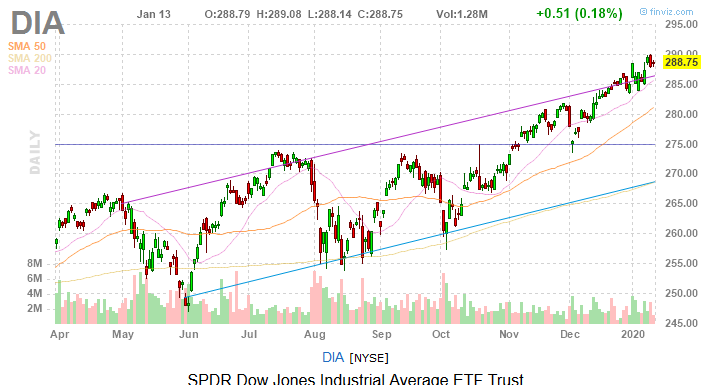 Led by technology names, stocks rallied Monday, two days before the U.S. and China are slated to sign Phase I of the much anticipated trade accord.

Ahead of the trade deal signing on Wednesday, the U.S. took a step toward easing tensions with China by removing that country’s status as a currency manipulator.

“Treasury Secretary Steven Mnuchin in August first formally labeled China a currency-manipulator, a move that further escalated the trade war with Beijing after the country’s central bank allowed the yuan to fall in retaliation to new U.S. tariffs,” reports Bloomberg.

Whether there’s truth to the “China is a currency manipulator” accusation is a discussion for another day. What is clear is that the U.S. took criticism for levying that charge and lifting that dubious label goes a long way toward making nice with China.

As noted above, Goldman Sachs was a leader on the Dow Jones today, gaining 1.2%. The company released a new version of the Marcus app today, another sign the venerable Wall Street bank is bolstering its fintech footprint and looking to become more consumer-facing.

Analysts expect JPMorgan to post earnings of $2.35 a share, a 7% increase on a year-over-year basis. With the Federal Reserve having trimmed interest rates three times last year, the commentary and numbers to watch from JPMorgan and other big money center banks will be about net interest margins.

A Limit to Apple’s Greatness?

Apple (NASDAQ:AAPL) notched a solid showing today, placing in the upper echelon of Dow stocks despite analyst commentary that iPhone shipments in China, recently viewed as a catalyst for the high-flying stock, could be limited in scope.

Data pertaining to iPhone suppliers declined in each of three months in the fourth quarter, indicating that Apple’s popular mobile device may be more of a late 2020 story as users and investors await the arrival of the 5G model.

On the day the widely followed J.P. Morgan healthcare conference kicked off in San Francisco, the Dow’s members from that sector were split with two higher and two lower. Johnson & Johnson (NYSE:JNJ) and Merck (NYSE:MRK) were the Dow healthcare winners today, albeit in modest fashion.

The drug pricing issue, one that never seems to die, was at play again today following a Wall Street Journal piece noting that pharmaceuticals companies are getting creative in their efforts to get paid for their priciest drugs, even amid significant pressure from patients and insurance providers.

With 2020 being a presidential election year, expect to hear much more about this issue as the year moves along.

Down Day for Disney