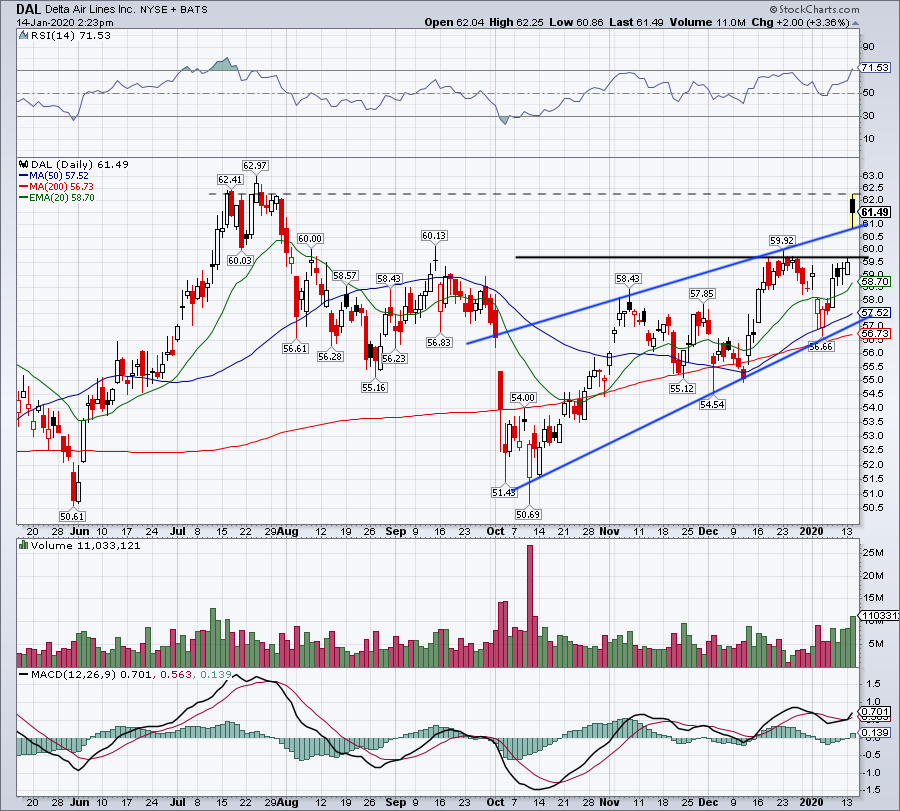 Stocks hit new highs on Tuesday before retreating in afternoon trading after tariff news hit the wires. With that in mind, let’s look at a few top stock trades for Wednesday.

Delta Air Lines (NYSE:DAL) stock is rallying on Tuesday, climbing to its highest levels since July after better-than-expected earnings results. The stock broke out over channel resistance (blue line) and the $59.50 level, which has been resistance over the past month.

However, sellers have stepped in between $62.50 and $62, which is where the stock struggled in July. That said, buyers stepped back in near $61, the backside of prior trend resistance.

So what now? Wait for one to break. 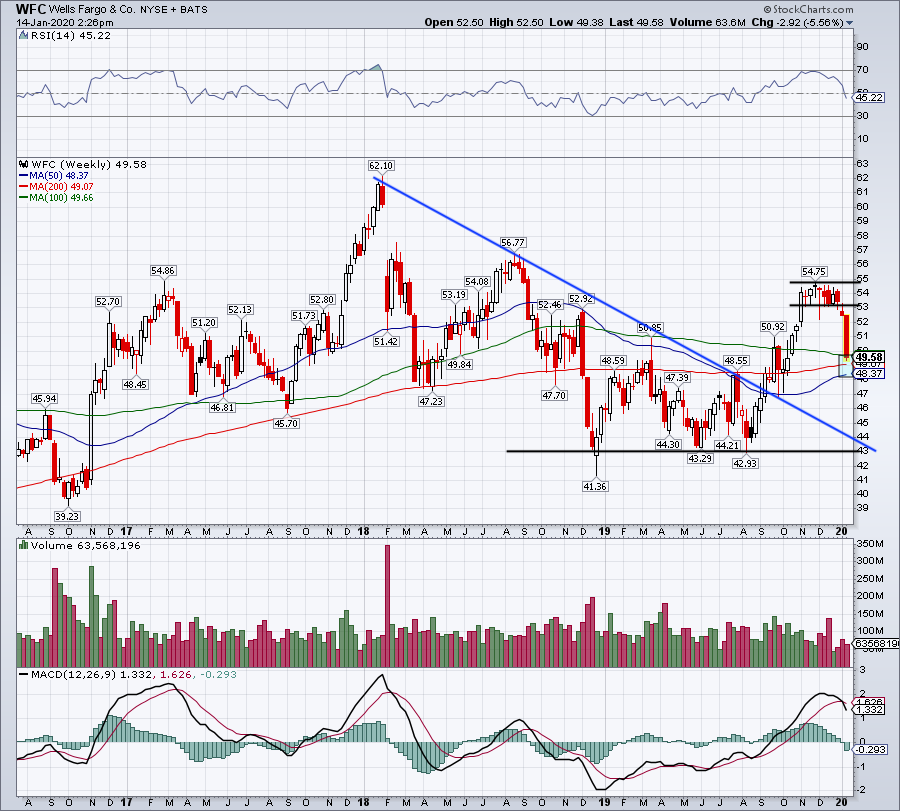 While several bank stocks were rallying on Tuesday, Wells Fargo (NYSE:WFC) wasn’t one of them. Given the momentum in names like JPMorgan (NYSE:JPM) and the soon-to-be-discussed Citigroup (NYSE:C), there is little motivation to chase a stock with no momentum.

That said, Wells Fargo is coming into an area where it should find support. The 50-week, 100-week and 200-week moving averages are all between $48.37 and $49.66. Below this range and there may not be much support nearby to buoy the share price.

On a rebound, see if the stock can reclaim its prior trading range by climbing back above $53. 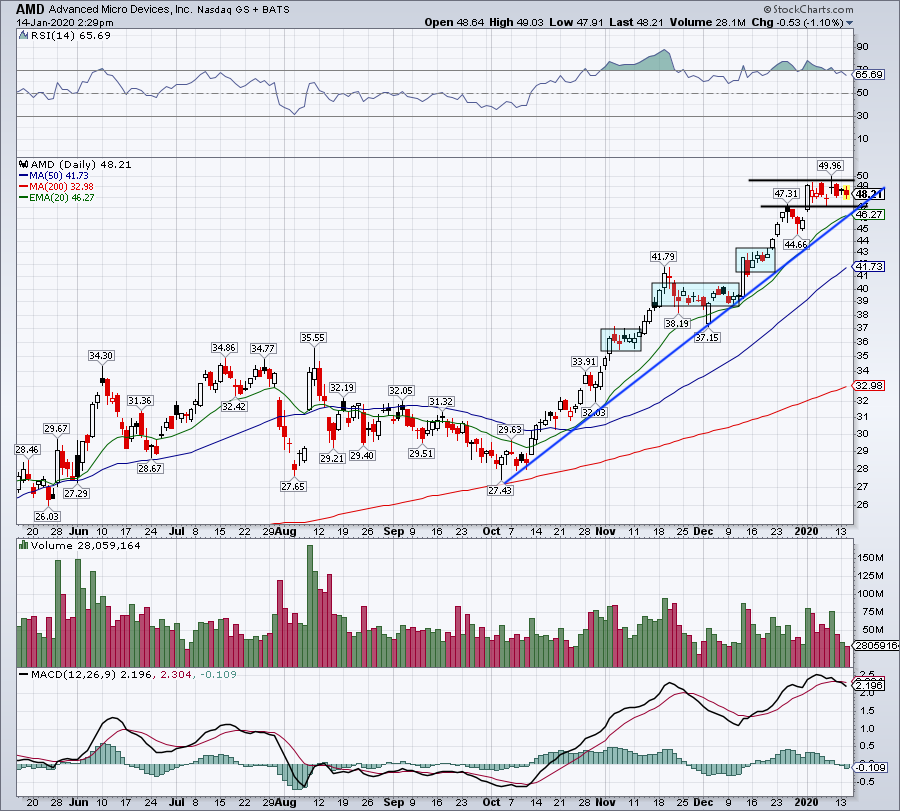 Is Advanced Micro Devices (NASDAQ:AMD) preparing for another charge higher? The stock has made rallying a routine at this point, but often times, these moves come after control consolidation periods.

Those are shown on the chart in the form of blue boxes, as the stock rallies, pauses and resumes. Can it keep going?

$50 is the lid on AMD now, and so bulls will need to see a big-time breakout over that mark to get much upside going from here. Support is in play near $47, with both uptrend support and the 20-day moving average close behind.

Traders can play it this way: A breakout over $50 likely draws in buyers, as does a pullback to the $47 level and the 20-day moving average. However, a close below the latter could trigger a sell signal for investors — and send AMD down to the mid-$40s. 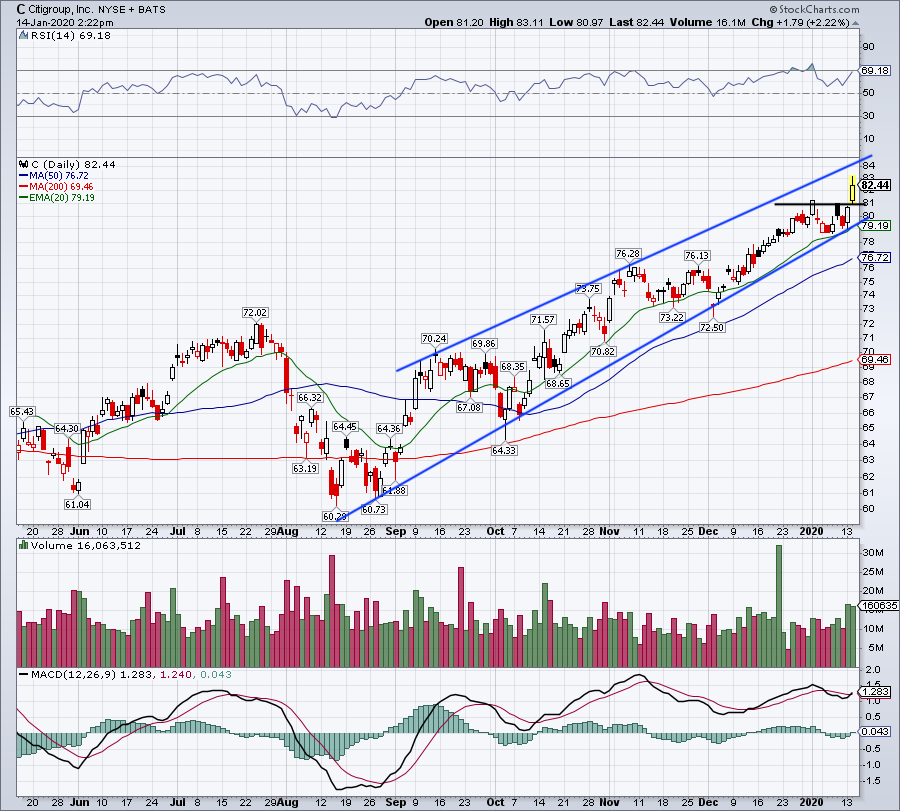 Like JPMorgan — and unlike Wells Fargo — Citigroup is also rallying on Tuesday on earnings. The move thrusts shares over $81 resistance, and puts a move up to around $84 on table.

This one is simple, but the timing makes it more difficult. On a pullback, look to see if C stock finds support at prior $81 resistance. If the pullback is quick and $81 fails, look for uptrend support and the 20-day moving average to buoy the name.

If the stock rallies and/or treads water first, and the 20-day and uptrend support clear $81, see that they act as support. Either way, below all three of these marks and the 50-day may be the next level of support for Citigroup.

For now, this “Pick of the Decade” remains a buy-on-dips candidate. 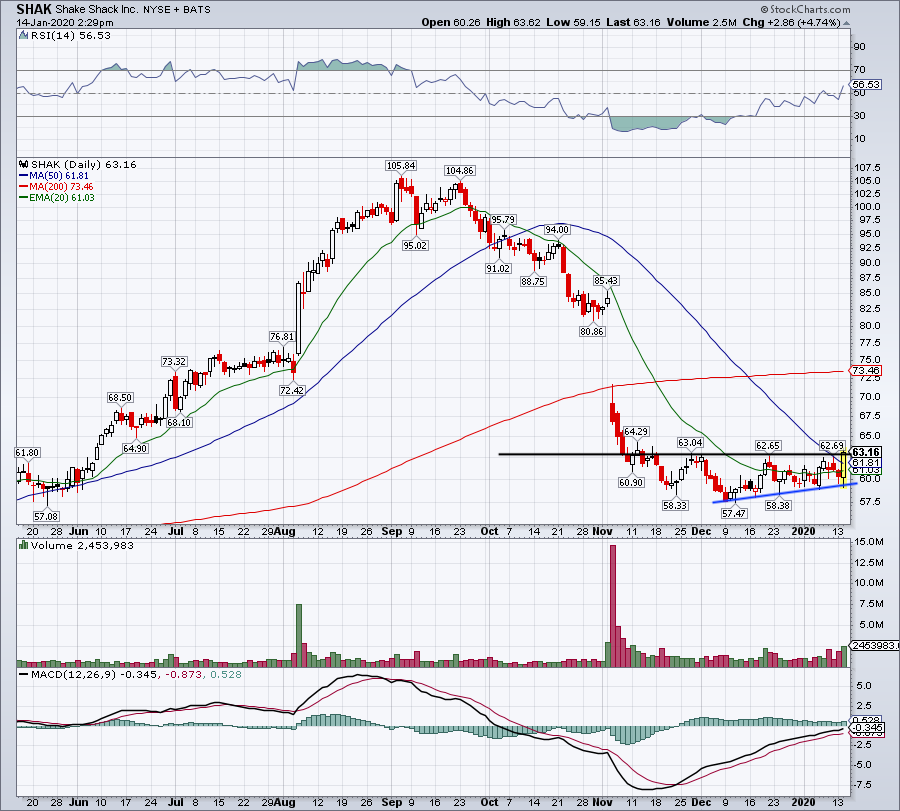 Shake Shack (NYSE:SHAK) made moves on Tuesday, rallying over 6%.

The move comes off a test of uptrend support (blue line), as shares power through $63 resistance and the 20-day and 50-day moving averages.

It will take time, but let’s see if the stock can get back to $70-plus. If so, it will get back to the November gap-down area, and have the potential to test the 200-day moving average.

In the short term, a continuation over $63 would be encouraging so that a future pullback to this level can act as support. However, it’s now vital that the stock holds up over uptrend support.

Below, and the trade is over.