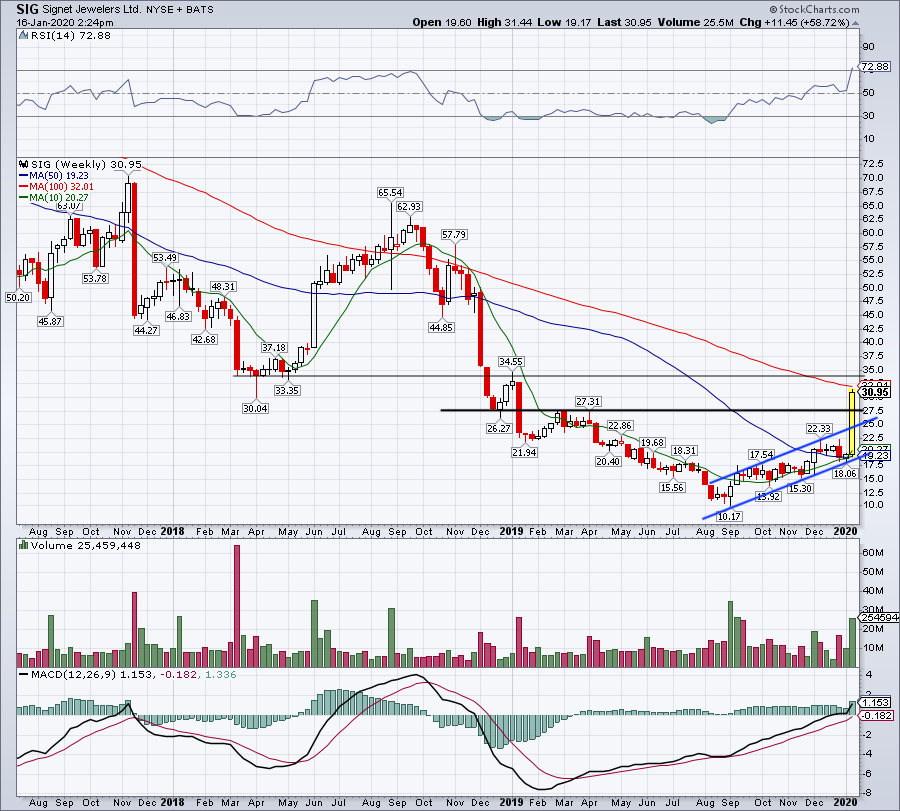 Stocks continue to push higher, with major U.S. indices hitting more record highs on Thursday. That being said, here’s a look at a few top stock trades for Friday.

There’s a short squeeze alert in Signet Jewelers (NYSE:SIG). The stock is more than 40% on Thursday on better-than-expected earnings. With a short interest of 32% and needing more than seven days to fully cover, this one has squeeze written all over it.

Signet isn’t the only short squeeze out there, it’s just the latest to do so. The stock erupted out of its short-term channel (blue lines) and over the $27.50 level. I would love to see the latter hold as support in the event of a pullback.

Speaking of which, that will be on investors’ minds if SIG stock fails to reclaim the 100-week moving average currently near $32. Above that, and the $34 to $35 area will be the next upside target. 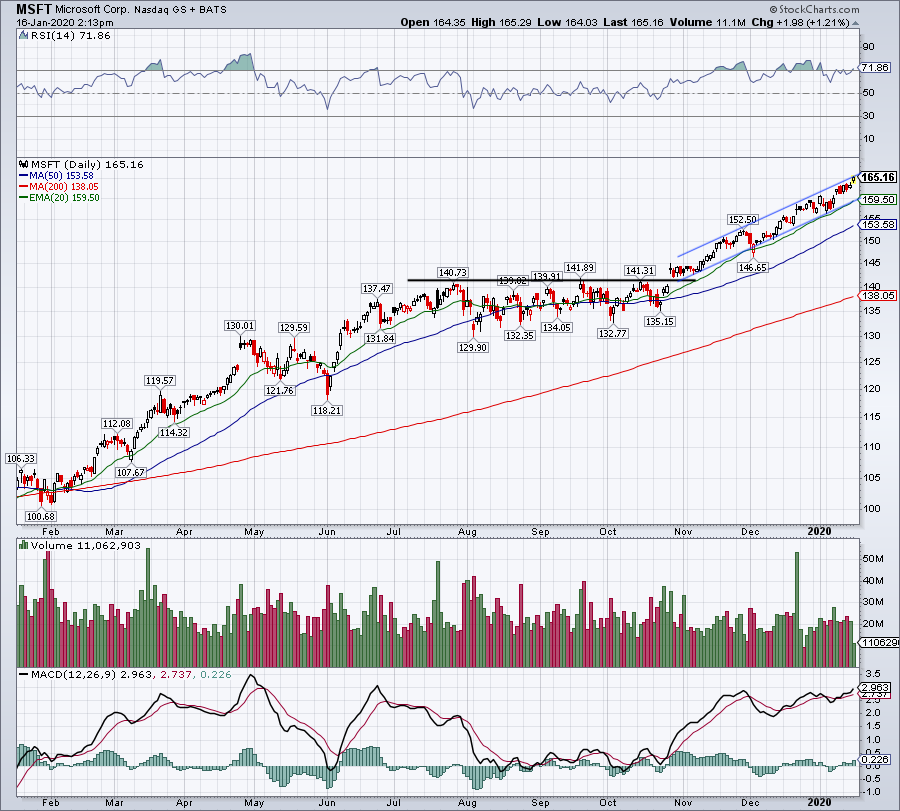 I think the best thing investors can ask for now is some gentle consolidation. Similar to what we saw from July through October, when Microsoft chopped between the $130-$140 range as the stock digested its big gains from the previous six months.

For now, shares are in an uptrend, with the 20-day moving average acting as support. Dips to this mark can be bought, until the trend fails. Once that happens — not if — then investors can start turning more cautious on the name, and keep an eye out for a potential pullback or consolidation phase. 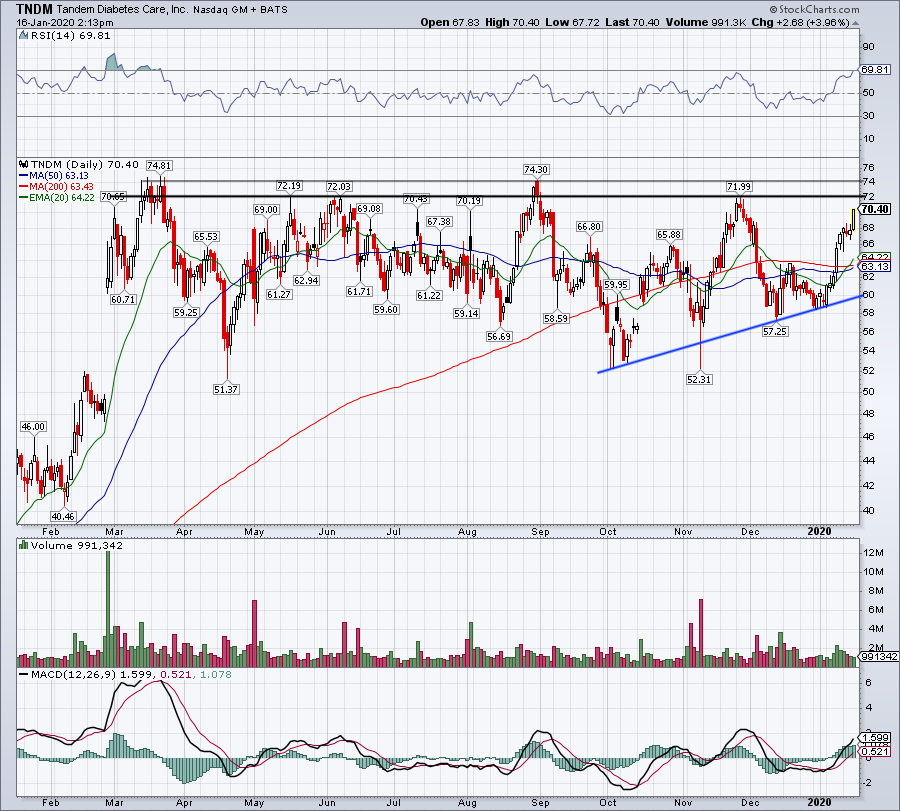 Tandem Diabetes Care (NASDAQ:TNDM) shares were moving higher on Thursday. And while the charts are setting up nicely, overhead resistance looms large.

The stock continues to put in a series of higher lows, and is over all of its major moving averages. However, the $72 level has been stiff resistance, while $74 hasn’t been much kinder. A breakout over the former likely sends it to the latter, but a breakout over both would be more ideal.

It could happen on the next test, but TNDM’s breakout may be more sustainable if it rallies up to this level, pulls back into support and tries again after making another higher low. Either way, keep both support and resistance on watch. 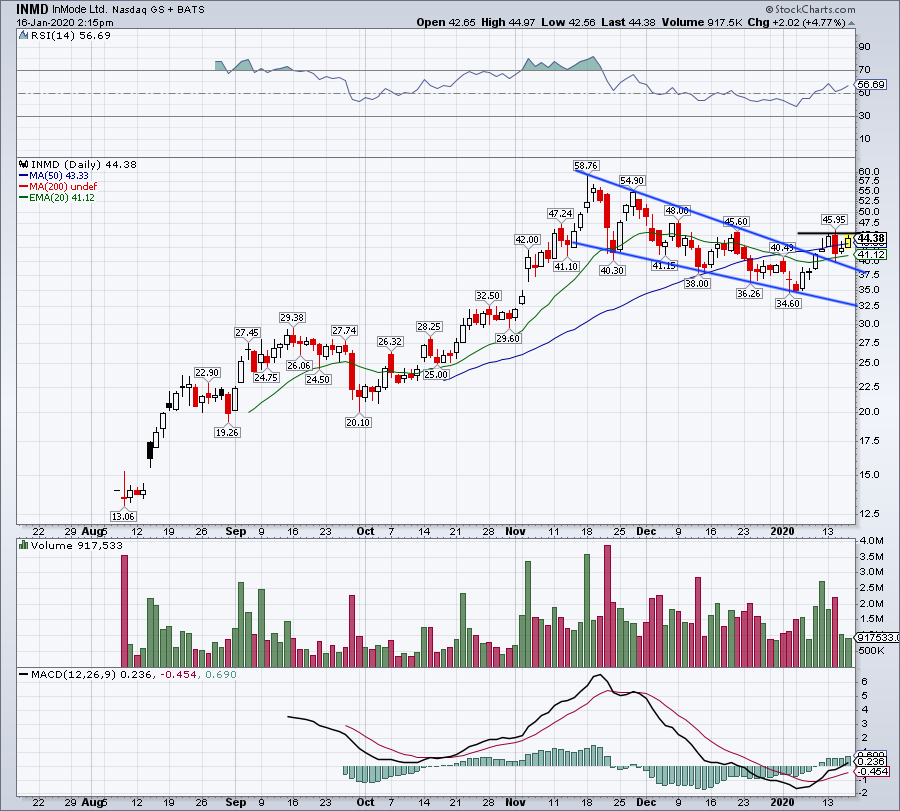 InMode (NASDAQ:INMD) shares jumped higher on Thursday, creating an interesting setup. A week ago, INMD stock broke out over downtrend resistance, but has been finding resistance at $45 as of late.

However, that’s not the focus. Instead, watch $45. Over this mark puts this week’s high on the table, at $45.95. Over that, and $50 isn’t out of the question for INMD. Below the 20-day moving average, and the backside of prior downtrend resistance is on watch. 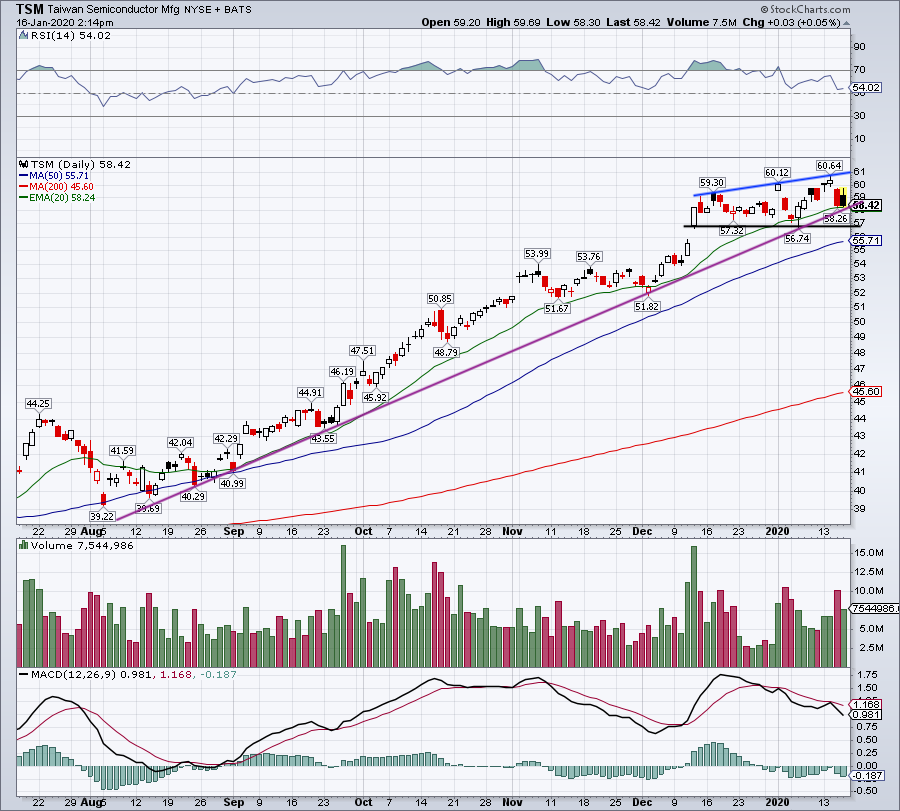 Taiwan Semiconductor (NYSE:TSM) is essentially flat on Thursday, despite initially rallying on earnings. Now, the stock is setting up in a rather tight trading range.

Shares are struggling with the $60 level and uptrend resistance (blue line). On the plus side, the 20-day moving average has been acting as support, while longer-term uptrend support (purple line) remains in play.

Below support, and the $57 gap-up support mark is in play with the 50-day moving average just below. If the 50-day fails as support, TSM will need more time to reset. Over the two-day high of $59.70, and TSM can rally up to trend resistance — currently near $61.