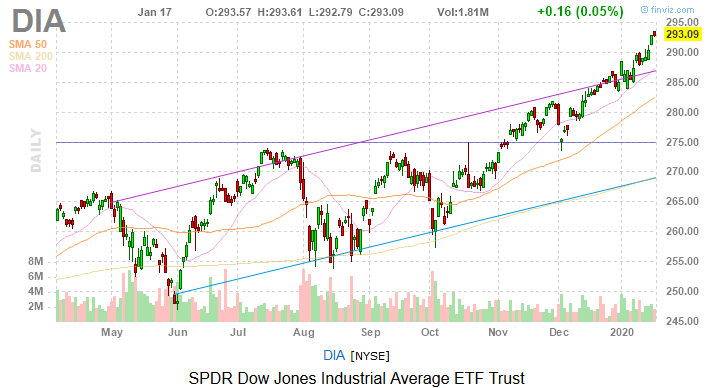 On a Friday before a holiday weekend, investors can usually expect some sluggish market action and that was the case today, but small gains are better than losses and the small gains accrued today lifted the widely followed U.S. equity indexes to another batch of record highs.

On a day of light earnings news flow for Dow components, the index was helped higher by some economic points. For example, housing starts jumped to a 13-year high last month. Housing starts of 1.6 million in the last month of 2019 topped the 1.375 million units economists were expecting and likely contributed to Home Depot (NYSE:HD) as one of the best Dow performers after Visa.

Housing data is vital because that segment accounts for over 3% of domestic economic output. In a separate report, the Job Openings and Labor Market Turnover Survey (JOLTS) said job openings slipped by 561,000 to 6.8 million for the month of November, indicating the economy is getting close to full employment.

Those are just two data points, but they speak to the notion that the U.S. economy is unlikely to encounter a recession this year. Stocks seem to be reflecting as much.

While Home Depot, Visa and plenty of others were among the Dow winners today, IBM (NYSE:IBM) wasn’t part of the fund. Big Blue only gained 0.23% after Morgan Stanley analyst Katy Huberty downgraded the stock to “equal-weight” from “overweight.” She maintains a $155 price target on the stock.

“With signs of deceleration at core IBM, we see long-term revenue growth as less likely without a more meaningful shift in the portfolio,” Huberty said in a note to clients.

She added that a Morgan Stanley survey of CIOs indicates spending on IBM products and services could slow and there is “risk to CY20 EPS guidance.”

Overall, IBM’s Friday decline was modest and it was far from the worst-performing stock in the Dow today.

That “honor” goes to Boeing (NYSE:BA), a stock that has been making regular appearances in this space to start 2020, often for challenging reasons. Today, Boeing issued a statement saying it’s making “necessary changes” to the software in the 737 MAX passenger jet. At issue is monitor connectivity, which tells pilots if systems are operating correctly.

“One of the monitors was not being initiated correctly, officials said. The monitor check is prompted by a software command at airplane or system power up, and will set the appropriate indication if maintenance is required, company officials added,” according to Reuters.

The software update is needed, but is another delay in the effort to get the 737 MAX back in the skies.

In cheerier news, there’s Apple (NASDAQ:AAPL), which posted another modest gain. I can remember writing about Apple seven or eight years and using factoids, such as the stock’s market value exceeding that of all the stocks in countries like Poland and Vietnam. Well, hat tip to CNBC on this one, Apple is now worth more than the entire Australian equity market and that’s saying something because that’s a top 15 global economy.

Microsoft (NASDAQ:MSFT) basically flat on the day, but it wasn’t for lack of news flow. The company is launching a new campaign this weekend aimed at stealing market share in the workplace app arena from Slack. Microsoft competes with Slack with its “Teams” platform.

As noted above, it wasn’t surprising to encounter a slow-moving market day today, but the action will pickup next week despite it being just a four-day trading week.

Nearly from Jan. 21 though Jan. 24 and that includes a half dozen Dow components over the last three days of the week.