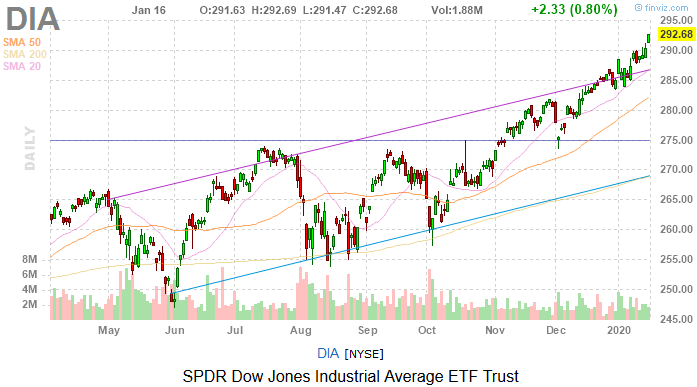 Lead by technology and financial services names — two of the three largest sector weights in the S&P 500 — the major equity benchmarks ascended to fresh records Thursday as the Senate approved the U.S.-Mexico-Canada free trade agreement, one of the cornerstones of President Trump’s 2016 campaign.

In addition to the aforementioned signing of the USMCA, the White House’s second trade victory this week, stocks were supported by some favorable economic data. While some brick-and-mortar retailers have recently delivered disappointing results for the holiday shopping season, the broader picture was brighter today.

That data point helped the likes of Home Depot (NYSE:HD) and Walmart (NYSE:WMT) join the ranks of the Dow Jones winners today and there were plenty of those, as 26 of the blue-chip index’s names were in the green in late trading.

Phase I of the U.S.-China trade deal has wide-ranging implications for a variety of sectors and industries, but many of the thorny technological issues between the two countries will need to be addressed in another round of trade talks.

Still, there was some good news for tech investors today and it came from a company that’s not a Dow member. Taiwan Semiconductor (NYSE:TSM) said its fourth-quarter revenue climbed 10.6%, though that somewhat disappointed analysts.

More importantly, the company forecast first-quarter sales of $10.3 billion, above Wall Street forecasts. The company is the world’s premier chip foundry firm and its revenue proclamation today explains Intel (NASDAQ:INTC) was one of the Dow winners on Thursday.

Piper Sandler analyst Harsh Kumar said in a note out earlier today that “2020 appears to be a major recovery year for the semiconductor market.”

Apple (NASDAQ:AAPL) got in on the act because Taiwan Semiconductor management cited 5G deployment as a catalyst for higher revenue this year. Many TSM customers are Apple suppliers.

Disney (NYSE:DIS) notched another modest gain today, again proving its 2019 bullishness was no fluke. What was impressive about Disney’s upside was that it was accrued against what could be deemed a challenging intraday backdrop.

First, rival Comcast (NASDAQ:CMCSA) launched its Peacock streaming service, a competitor to Disney +. Second, Netflix (NASDAQ:NFLX) reports earnings next week and some analysts are saying the company will put to rest investors’ concerns about rivals, such as Disney +.

Netflix reports results Tuesday, Jan. 21 after the bell, an event that will almost certainly move that stock and potentially Disney as well.

Boeing, Believe it or Not

Boeing (NYSE:BA) was again among the Dow winners despite another day of challenging headlines, something the company should be accustomed to by now. Southwest Airlines (NYSE:LUV) joined rivals in saying it will keep the 737 MAX grounded until at least June.

A Department of Transportation panel said earlier today said the Federal Aviation Administration did things by the book when it signed off on the 737 MAX three years ago, but enhancements need to be made to the FAA’s procedures.

Today’s bottom line actually doesn’t pertain directly to the Dow or any of its constituents, but it’s relevant nonetheless.

Some market observers are opining that 2020 could be a banner year for small-cap stocks, a sentiment the Russell 2000 Index’s Thursday breakout may have confirmed. Obviously, there aren’t any small-cap names in the Dow, but if that segment of the market rallies, it would benefit other groups in the form of increased risk appetite.