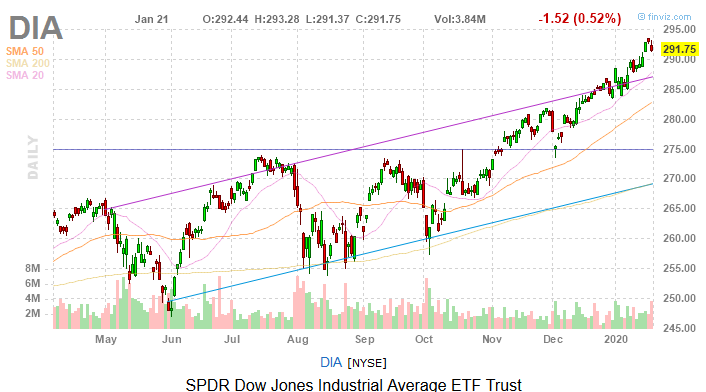 News that a new respiratory virus has killed six and injured nearly 300 more in China weighed on global stocks, providing an adequate reason for some traders to take profits. This inevitably sent all three major U.S. indexes off their recent record highs and into the red on the first trading day of the week.

“The emergence of the illness in China — and concerns it could be spreading outside the country — stirred memories of the SARS outbreak 17 years ago for some market watchers, though it isn’t yet as serious,” reports Bloomberg. “The developments provided an excuse for investors who bid up U.S. stocks to record highs last week to take a pause and assess the outlook for global growth and corporate profits as earnings season picks up.”

Fortunately, China is already taking a proactive approach to dealing with the outbreak and history indicates markets have a way of moving past these issues somewhat quickly. Plus, there are slew of earnings reports looming this week, including several from Dow components, so there will be plenty of company specific commentary to focus on.

In late trading, a third of the Dow’s 30 members were higher.

IBM (NYSE:IBM) traded modestly higher today in advance of its after-the-close fourth-quarter earnings report. Analysts are forecasting earnings of $4.68 on revenue of $21.64 billion. Be warned that if you’re holding IBM into the today’s earnings report, the company has a history of post-earnings slumps.

Over the past three months, analysts have been lowering revenue and profit estimates for the Dow tech company. That could mean IBM has a lower bar to clear and if it doesn’t, the stock could be punished.

As noted above, Intel was one of the Dow’s best-performing names today. The semiconductor giant reports earnings Thursday after the close. On Tuesday, Intel stock got the benefit of an upgrade to “hold” from “underperform” from Jefferies. The research firm put a $64 price target on the stock, implying modest upside from today’s close around $61.

Boeing (NYSE:BA) makes another visit to this space today, checking in as by far the worst Dow performer with a loss of 3.3%. More issues regarding delays in the getting the 737 Max back in the skies plagued the stock again on Tuesday.

The company could take a $5 billion charge related to the mounting snafus with the 737 Max, but the bad news doesn’t end there. While U.S. markets were closed yesterday, news broke that Boeing is looking to borrow up to $10 billion from banks.

Lenders appear eager to step up as the company has reportedly already secured $6 billion, but some investors took to Twitter to chide Boeing for borrowing in the first place, saying this could have been avoided had the company focused on quality in operations and not buying back stock.

Johnson & Johnson (NYSE:JNJ) is the Dow component stepping into the earnings confessional before the bell Wednesday and the stock notched a modest gain today in advance of that report. Analysts expect JNJ to deliver earnings of $1.78 per share on revenue of $20.78 billion for the December quarter.

What investors will be waiting for is commentary on asbestos and opioid litigation and just how close JNJ is putting those issues in the rear view mirror.

Usually when China is the source of negative headlines, it means larger declines for stocks than what investors endured today. Translation: investors are focusing on U.S. economic data and stock-specific issues. At least for now and that should be good news.

Over the near-term, the primary risk investors have to contend with is earnings lethargy and there could be some of that in the offing.