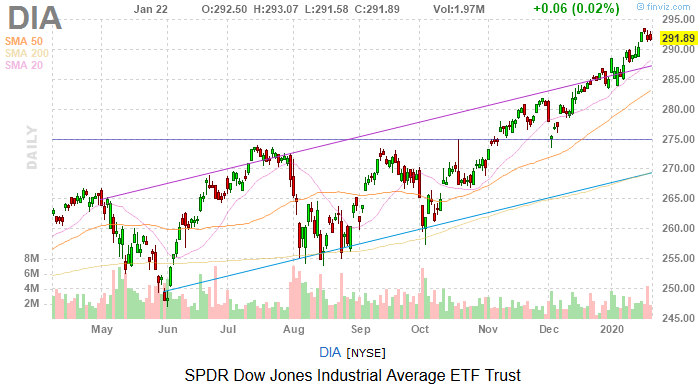 With more marquee companies, including some members of the Dow Jones Industrial Average, stepping into the earnings confessional over the last 24 hours, there were ample headlines to move stocks Wednesday. While there was action to be had, gains for broader benchmarks were small.

Industrial stocks were an obvious spot of weakness for the Dow Jones with each of the index’s members from that sector trading lower today. Once again, Boeing (NYSE:BA) was an offender, shedding 1.58%, even after CEO David Calhoun said the company plans to continue paying its dividend “unless something dramatic changes.”

On the other hand, that doesn’t mean the payout will be increased as the company struggles with the 737 Max issue. Caterpillar (NYSE:CAT) was another industrial offender, dropping almost 2% on light news flow. That company reports earnings on Jan. 31.

Overall, 18 of 30 Dow stocks were higher in late trading.

IBM, a company with a history of earnings disappointments and subsequent poor reactions by the stock, bucked that ominous trend today. Big Blue said it earned $4.71 per share on revenue of $21.80 billion in the fourth quarter, beating estimates calling for earnings of $4.68 cents and revenue of $21.64 billion.

“We ended 2019 on a strong note, returning to overall revenue growth in the quarter, led by accelerated cloud performance,” said IBM CEO Ginni Rometty in a statement. “Looking ahead, this positions us for sustained revenue growth in 2020 as we continue to help our clients shift their mission-critical workloads to the hybrid cloud and scale their efforts to become a cognitive enterprise.”

Some analysts were mostly encouraged by IBM’s results.

“Consulting revenue saw a lift of 4% year-over-year growth in the quarter, but that did not overcompensate for global business services’, or GBS’, roughly flattish revenue growth in the quarter, which is suffering weak demand for business process outsourcing,” said Morningstar in a note out earlier today. “We’re encouraged that the consulting business is not suffering instead, as consulting is a much higher-margin business, and we consider it to be a driver of other IBM offerings. Moreover, we expect business process outsourcing revenue to decline throughout the IT services industry.”

Johnson & Johnson (NYSE:JNJ) traded slightly lower Wednesday after the company said it earned $1.88 a share on sales of $20.74 billion in the fourth quarter compared with Wall Street estimates of $1.87 per share on revenue of $20.80 billion.

The devil in the details was $264 million in legal expenses, but that’s well below the $1.29 billion JNJ allocated to the same purpose in the year earlier period.

In better news, JNJ’s “pharmaceutical business posted revenue of $10.54 billion, a 3.5% increase year over year. The company’s consumer unit, which makes beauty products such as Neutrogena, generated $3.5 billion in revenue, up 0.9% from a year earlier,” reports CNBC.

In advance of its Thursday after-the-close earnings report, Intel (NASDAQ:INTC) surged again today, tussling with IBM for top honors in the Dow. Cascend Securities reiterated a “buy” rating on Intel, this time lifting its price target on the stock to $75 from $65.

In aggregate, the Wednesday performances of the Dow, Nasdaq and S&P 500 were by no means impressive, but the aforementioned IBM report could be something to build on, particularly if Intel, a better gauge of risk appetite, meets and beats tomorrow.

While most prognosticators are expecting modest upside for stocks this year, Credit Suisse’s Jonathan Golub on Tuesday boosted his year end S&P 500 target to 3,600 from 3,425.