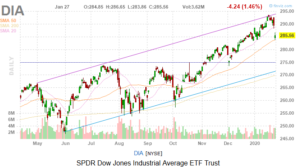 Stocks were punished again Monday as the impeachment proceedings on Capitol Hill continued ramping and amid more reports of the coronavirus throughout the world.

There are now roughly 3,000 confirmed cases of the coronavirus around the world with 80 deaths. In both instances, the bulk of the problem is sourced to the central Chinese province of Hubei, mainly the capital city of Wuhan. Hence the term “Wuhan virus.”

Last week, I noted that in some kind of, sort of good news, health officials were stopping short of comparing this strain of coronavirus to the SARS epidemic seen in 2003. Unfortunately, those comparisons are emerging, rattling global markets in the process.

Focusing on domestic equity benchmarks for a moment, suffice to say it’s a positive that casino companies aren’t larger parts of the S&P 500 and none are members of the Dow Jones Industrial Average because the likes of Las Vegas Sands (NYSE:LVS) and Wynn Resorts (NASDAQ:WYNN), among others, were savagely repudiated today.

In late trading, just eight of the Dow’s 30 components were higher and seven of those eight can accurately be described as defensive names.

As noted above, Walmart was the Dow leader today. News flow for the largest retailer was light on the day, indicating this very much a flight to safety trade.

The same can be said of Walgreens Boots Alliance (NASDAQ:WBA), a defensive name that rallied on no company-specific news today. Of the pair, WBA is undoubtedly the more dangerous play. The pharmacy operator was the Dow’s worst performer last year and 2020 hasn’t been any more kind to the stock, as it entered Monday with a year-to-date loss north of 11%.

This could be a reaction to coronavirus fears as some traders may be speculating that these companies are involved in some type of antidote or treatment for the respiratory illness. There is some truth to that speculation as JNJ say it’s working on a coronavirus treatment.

Perhaps the better explanation for Pfizer climbing today is that the company reports fourth-quarter earnings before the bell. Wall Street is expecting earnings of 58 cents a share on sales of $12.6 billion.

Apple (NASDAQ:AAPL) reports earnings after the close tomorrow and the stock was one of the worst performers in the Dow Jones today, tumbling 2.94%. This is very much a symptom of the China virus news because the world’s second-largest economy is one of Apple’s most important end markets and the company relies on other nearby countries as manufacturing hubs.

Wall Street is expecting earnings of $4.55 per share on sales of $88.37 billion and China will very much be in focus on Apple’s earnings call.

On fears that the coronavirus will slow global travel — and it’s doing just that in Asia — American Express (NYSE:AXP) slid about 3%.

Underscoring the point that China has wide-ranging implications for an array of American companies, Caterpillar (NYSE:CAT) was also among the Dow’s dogs today.

UnitedHealth Group (NYSE:UNH) was also in the group of Dow offenders today not because of China because the company has no exposure to that market. Rather, the culprit for UNH is the recent momentum being accrued by Democratic presidential hopeful Sen. Bernie Sanders just days before the Iowa caucus.

Guess what the Vermont senator favors? Medicare For All, the bane of managed care providers’ stocks. A win by Sanders in the Iowa caucus, or even a strong second-place showing, would likely be a near-term drag on UNH.

Financial market reaction to the coronavirus is typical. In about a week, the fatality tally has swelled to 80 from two and those aren’t the type of headlines riskier assets move higher on.

Additionally, with so many Chinese cities under quarantine or beholden to travel bans, it’s possible that first-quarter GDP numbers are going to come in lower than previously expected. Those are China-specific issues, but they have the potential affect markets the world over.