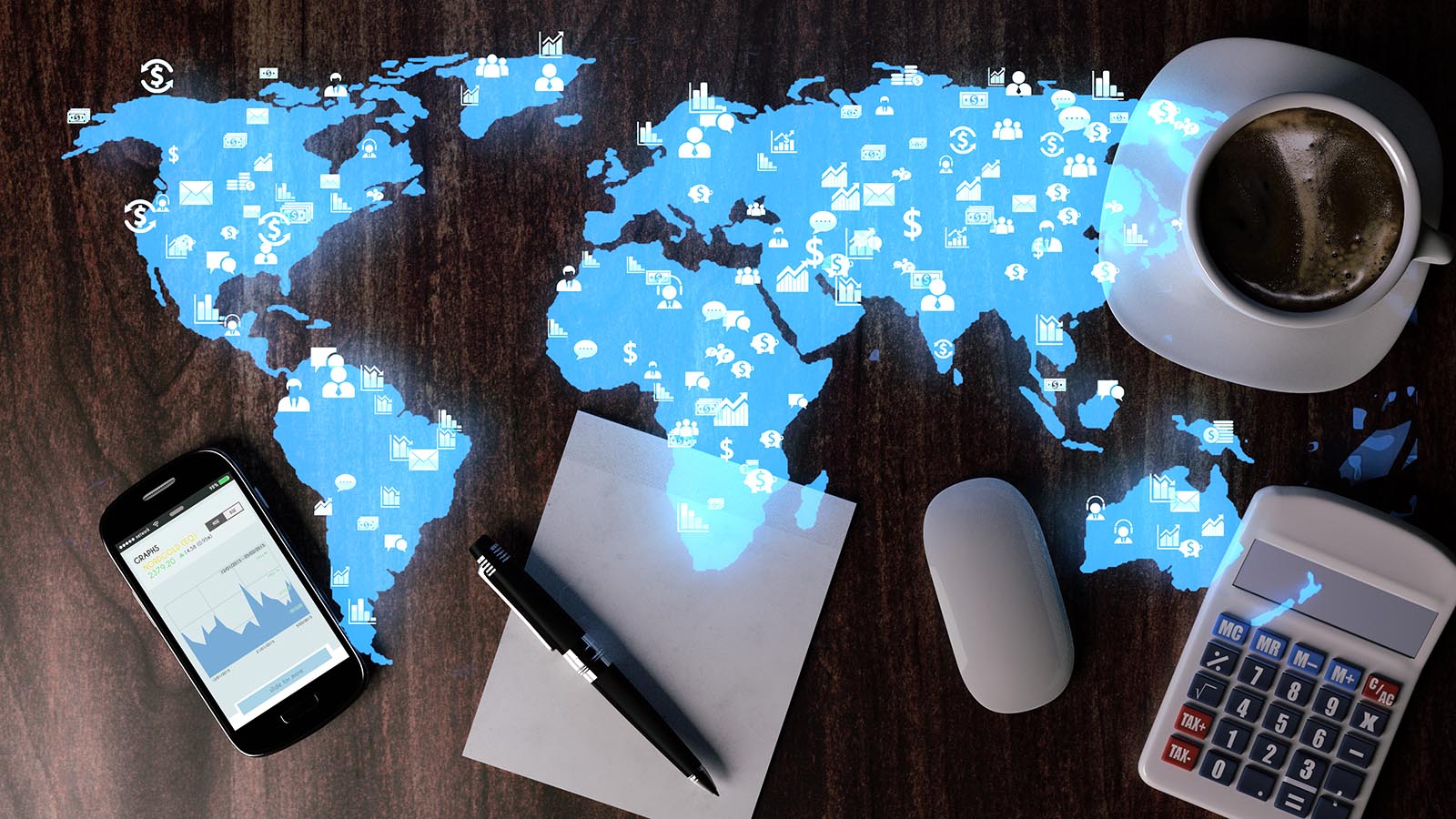 Over the past decade, American stocks have absolutely crushed their overseas rivals. The U.S. stock market has benefited in large part from the emergence of the FAANG stocks and other fast-growing tech and internet companies. These, along with a robust economic recovery, have powered the S&P 500 to a 264% total return over the past decade. International holdings, including foreign dividend stocks, haven’t fared so well. The world stock market, excluding U.S. stocks, is up a more modest 70% over the same span, as measured by the Vanguard FTSE All-World ex-US ETF (NYSEARCA:VEU).

However, that underperformance leads to an opportunity. Markets usually revert to the mean; after a hot period, expect stocks to cool off. After a decade of American outperformance, international shares could be set to shine.

Additionally, foreign stocks add favorable qualities to your overall portfolio. We spoke with Steven Dennis, who is the Firestone Chair of Corporate Finance at Kent State University. He told us that:

“Many investors exhibit what is referred to as ‘Home Bias,’ which is the tendency to invest in companies near where the investor lives (i.e., U.S. investors’ preferences for U.S. stocks).  There are advantages to investing in foreign stocks in the form of diversification.  Other countries’ economies do not perfectly correlate to the U.S. economy, so adding a dividend-paying stock in a foreign country to the portfolio can provide yield and perhaps also reduce risk. While it is true that correlations between stock markets around the world tend to increase in troubled times, which reduces diversification benefits, foreign investing can provide risk-reducing benefits over long periods of time.”

With the historic discount in international companies as opposed to American ones, this is a great time to start gaining the advantages of investing in some foreign dividend stocks. Here are seven underappreciated names that have strong dividend track records.

Despite being one of the world’s most well-known vehicle brands, Honda Motor (NYSE:HMC) is not a particularly hot stock with American investors. Generally, if investors go looking for dividends out of the auto sector, they buy Ford (NYSE:F). And Ford certainly offers a high dividend yield, but one that comes at a lot of risk given the stalled out auto market and debt-filled balance sheet.

Honda stock, after its recent 10% pullback, is now offering a 3.9% dividend yield. In addition to the auto business, it’s also a leader in motorcycles, particularly in emerging markets. Although the coronavirus may slow things down a bit, Honda should enjoy a pick-up in key markets such as Southeast Asia once the trade deal is in place and global growth picks up again.

Grupo Aval (NYSE:AVAL) is certainly an underappreciated international dividend stock — it has very little following in the U.S., despite being a $10 billion market capitalization Colombian bank holding company. That lack of exposure is likely due to the company’s history. It elected to launch its U.S. initial public offering in mid-2014, just as the oil market started to crater.

Given that crude oil makes up half of Colombia’s exports in a good year, this was disastrous timing for Colombia’s largest financial firm. AVAL stock immediately tanked from $14 to $6 per share. However, it has spent the last few years starting to recover. Shares recently tagged $9, making for a 50% rebound off the lows. Colombia has adjusted to lower oil prices with fiscal reforms, and economic growth has picked back up.

Meanwhile, Aval has remained faithful to its shareholders. It has paid a continuous monthly dividend dating back to 2001 (for its shares listed on the domestic Bogota stock exchange) and a fairly generous one at that. Shares currently pay three cents a month (36 cents a year) making for a 4.2% annual dividend yield.

And at 9x forward earnings, the stock is rather cheap as well, while offering substantial upside in the event that oil prices pick back up and lead to a robust move in emerging markets generally and in Colombia in particular. There are relatively few monthly-paying dividend stocks outside of specialized sectors such as real estate investment trusts (REITs), so if you want to diversify your monthly-paying dividend holdings, give Aval a look.

Speaking of oil, the major international energy firms are a good way to diversify your portfolio while buying reasonably priced stocks. Instead of picking Exxon (NYSE:XOM) or Chevron (NYSE:CVX), for example, you can grab BP (NYSE:BP) and diversify the geographies and markets within your portfolio. Let’s say U.S. stocks start to underperform after a decade of crushing all competition; meanwhile, British stocks recover as Brexit fears finally fade. In that sort of scenario, BP should add some alpha to your portfolio.

And if nothing else, it will certainly add some meaty dividends. BP stock is paying out a 6.6% dividend yield. That $2.46 per year payout is well-covered by earnings, as analysts project BP to earn 3.24 per share next year. BP is among the higher-yielding stocks out there where the dividend is easily secured from its current business operations. And if oil prices finally find some upside going forward, shares could explode higher.

On the subject of the United Kingdom, they have more good dividend stocks as well. Take Diageo (NYSE:DEO) for example. The company is a global leader in spirits. It produces Johnnie Walker, Smirnoff, Baileys and Ketel One among many others. It also has some other reputable alcoholic beverages, including Guinness beer.

The company has been subject to on-and-off concern about the potential impact of Brexit on its supply chain since 2016. It has also faced a sharp slow-down in sales in some of its key emerging markets in recent years. However, management has overcome both of these concerns, and both earnings and the share price have soared in recent years.

So is Diageo still worth buying today? For long-term investors, absolutely. The company has raised its dividend every year (as measured in its home currency of British Pounds) every year dating back to the turn of the century. Shares yield 2.5%, which isn’t huge, but does beat the overall market and grows quickly thanks to the annual dividend hikes. The rebound in the British Pound, if it continues, should lead to higher dividend payouts for American Depository Receipt “ADR” holders as well.

And this is exactly the sort of business you want to buy near the end of an economic cycle. Liquor sales hold up well regardless of the economy’s status, and Diageo is a conservatively managed cash flow machine. It will keep generating more profits, cash flow and higher dividend payouts in coming years, even if the overall stock market and economy hit a rough patch. Finally, of note for dividend-focused shareholders, the U.K., has an agreement with the U.S. that makes it so there is no withholding tax on British dividends whatsoever for American citizens.

Sticking with consumer staples, it’s fair to call Coca-Cola (NYSE:KO) one of the world’s most well-known and respected dividend investments. It’s as blue a blue chip as they come, and it has the all-important Warren Buffett endorsement.

However, Coca-Cola stock is now trading at all-time highs and is quite unattractive on a valuation basis given the disconnect between its rising share price and the lack of any underlying business momentum or growth. Luckily, Coca-Cola has various listed partners around the world, and some of them are much more promising at the moment. For example, we have Coca-Cola Femsa (NYSE:KOF), which is Mexico’s largest Coca-Cola bottler/distributor. It also has major operations in various South American countries.

Coca-Cola Femsa comes at the business from a position of strength, as it is half-owned by Femsa (NYSE:FMX), which is one of Mexico’s largest business conglomerates. Femsa operates more than 15,000 convenience stores in Mexico and South America, giving it a most favorable position for distributing Coke products.

KOF stock has gotten walloped in recent years thanks to lackluster economic activity in Latin America and a grueling bear market for Mexican stocks. And, in particular, Coca-Cola Femsa is the bottler for Venezuela, and has seen that 30 million person market go from a major profit center to essentially zero in recent years. But it could return to prosperity with any change in the Venezuelan government. More broadly, KOF stock is down from a peak of $150 to $60 now, despite stable business performance. As a result, shares yield 3.1%, while trading at just 17x through earnings. Get any sort of upswing in sentiment for Mexico or Venezuela and shares could rocket up from here — in the meantime, it pays a solid yield off a low-risk beverages business.

Since we’re talking about Mexico, long-time readers might be able to guess my next pick. I’ve championed the Mexican airport operators as surprisingly strong growth and income investments. And nothing has changed on that front. Over the past five years, the Mexican stock market has been no fiesta; the benchmark iShares Mexico ETF (NYSEARCA:EWW) is actually down almost 15% despite a raging bull market north of the border.

The Mexican airport operators have shrugged off the general malaise, however. All three public Mexican airport stocks are up big recently, and two of them are trading at all-time highs. And the fun is just getting started.

Why buy airports? They are incredibly high margin businesses; you get a cut of the airfare on every passenger that travels through, plus you get royalties off retail, restaurants, car parking, hotels and other services at your airports. Traditionally, air travel has grown far faster than global economic growth. And in Mexico in particular, discount airlines are booming as they supplant long-distance bus trips.

And why buy Grupo Aeroportuario del Pacifico (NYSE:PAC) in particular? The company is a diversified growth and income powerhouse. It operates the Guadalajara airport, which serves Mexico’s second-largest city. It also runs Puerto Vallarta and Cabos, which are two of Mexico’s leading tourist destinations. That mix of airports ensures plenty of both business and tourist traffic.

Over the years, Pacifico has grown revenues, earnings and EBITDA at a double-digit rate compounded. And it pays out nearly 100% of its operating cash flow in dividends, which ensures a strong income stream. It often yields more than 5%, and is at 3.7% even now with the stock at all-time highs. With the business growing double-digits every year, the dividend gets similar increases. Do note that Pacifico pays a semi-annual regular dividend and then one additional special dividend of variable size every year depending on its profitability. Many financial websites ignore the special dividend and thus understate Pacifico’s true dividend yield.

Hop on a southbound flight out of Mexico, and you may well end up in Panama. That’s where you’ll find my last pick, Banco Latinoamericano de Comercio Exterior (NYSE:BLX). This bank, which in English is the Foreign Trade Bank of Latin America, has a cool business model. Its primary backers are the Central Banks of various Central and South American countries. They put together this bank with the aim of boosting commercial activity throughout the region.

The bank, thus, downplays the traditional consumer deposits and lending business, and instead focuses on trade-driven business opportunities. It has a widely diversified loan portfolio across country and sector, as you’d expect with LatAm’s Central Bankers effectively running the shop.

BLX’s owners, which include 23 different Central Banks, are happy to get their cash profits paid back to them every year. As a result, BLX pays nearly all its profits out as dividends; shares yield 7.2% at the moment. The bank has historically been well-run and has not suffered an unusual number of lending losses. With its powerful and connected backers, investors that join the club by buying BLX stock can enjoy an unusually high dividend yield. And with time, the share price should move higher as well once Latin American economies pick up more steam.

At the time of this writing, Ian Bezek owned AVAL, BP, XOM, DEO, PAC, KOF, FMX and BLX shares. You can reach him on Twitter at @irbezek.