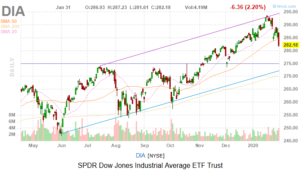 Stocks tumbled to end the week amid a batch of sour earnings reports from some cyclical companies and as coronavirus fears gripped trades around the world after the Center for Disease Control (CDC) could the respiratory illness an “unprecedented” health emergency.

It’s a shame Amazon (NASDAQ:AMZN) isn’t a Dow stock because it would have, at the very least, pared the DJI’s losses today following it Thursday afternoon earnings report, which was stellar. The company reported earnings of $6.47 per share on sales of $8.74 billion.

The subsequent surge in Amazon stock helps it join Dow components Apple (NASDAQ:AAPL) and Microsoft (NASDAQ:MSFT) as well as Alphabet (NASDAQ:GOOG, NASDAQ:GOOGL) in the $1 trillion club.

Unfortunately, cheery stock-specific news was mostly limited today beyond Amazon and IBM. The catalyst for IBM’s Friday rally, which saw the stock surge 4.62%, was news that Arvind Krishna is taking over as chief executive officer, replacing Virginia Rometty.

Exxon Mobil (NYSE:XOM) and Chevron (NYSE:CVX) reported fourth-quarter earnings today. Between that and oil’s ongoing death spiral, that was enough to send the two largest domestic oil companies to losses of about 4%.

It was widely expected that Exxon and Chevron would deliver fourth-quarter results that weren’t going to excite investors. The problem is markets, as they should, live in the present and look to the future. With oil coming off its worst January showing in three decades, it’s hard to expect much out of these companies’ first-quarter results.

Things are getting so bad for traditional energy stocks that some are comparing the group to the tobacco industry in the 1990s.

Caterpillar’s fourth-quarter earnings were fine, but its 2020 outlook was anything but as it appears the company could miss Wall Street estimates by as much as $2 on a per share basis.

“We expect continued global economic uncertainty to pressure sales to users in 2020 and cause dealers to further reduce inventories,” said CEO Jim Umpleby in a statement.

Visa (NYSE:V) had been one of the steadier names in the Dow to start 2020, but the stock slid xx% today following its Thursday afternoon earnings report. As is the case with the other Dow offenders highlighted here, Visa’s Friday decline isn’t as much about what happened in the prior quarter, but the company is saying could happen this year.

The company said the incentives it doles out to banks to use the Visa network are going to rise more rapidly than revenue this year.

Bottom Line on the Dow

Monday brings the first trading day of February, a month, that like January, can be taxing on stocks, though the average February loss for the S&P 500 over the past 20 years is modest.

There are still some earnings tests for the Dow to contend in the week ahead. That includes Disney (NYSE:DIS) on Tuesday and Merck (NYSE:MRK) on Wednesday. Disney is the more important of these reports and any encouraging outlook the company can offer would likely be well-received by investors due to the company’s leverage to the consumer.