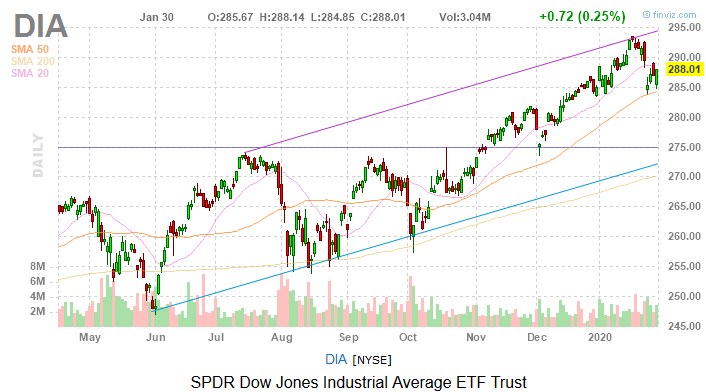 The World Health Organization (WHO) declared the coronavirus outbreak an international emergency earlier today, sending riskier assets lower in the process. That call makes sense because the number of confirmed cases and deaths are rising rapidly, reaching 7,700 and 170, respectively, as of early Thursday.

In addition to the virus concerns, some economic data released today provided unwanted headwinds for stocks. The Commerce Department said fourth-quarter GDP rose 2.1%, but some economists were critical of that figure, saying it was attributable to lower imports, not increased business investment.

Another “trouble spot” on the economic front was the consumer spending that showed that metric increased just 1.8% in the fourth quarter following a 3.2% gain in the third quarter.

In other words, there were enough negative or tepid headlines today to facilitate a mediocre day on the Dow Jones with just 14 of the index’s 30 residents higher in late trading.

As noted above, Microsoft was by far the Dow’s top performer today, delivering the type of post-earnings surge some thought the stock was capable of prior to that announcement. In its fiscal second quarter, Microsoft notched GAAP earnings of $1.51 per share on revenue of $36.91 billion. Wall Street was expecting earnings of of $1.32 per share and $35.67 billion in sales.

Predictably, investors are fawning over what Microsoft had to say about its Azure cloud business. Azure revenue surged 62% in the fiscal second quarter, a stunning increase to be sure.

“Results continue to underscore our thesis, which centers on customer adoption of hybrid cloud environments with Azure,” said Morningstar. “Microsoft continues to use its dominant position of on-premises architecture to allow customers to move to the cloud easily and at their own pace, which we believe will continue over the next five years.”

The Fizz Is In

Rivaling Microsoft for top Dow honors today was Coca-Cola (NYSE:KO), which surged 3.21% to an all-time high on the back of an impressive fourth-quarter earnings report. The world’s largest soft drink maker said it earned 44 cents on sales of $9.07 billion in the last three months of 2019, topping analysts’ estimates calling for revenue of $8.89 billion.

Atlanta-based Coca-Cola forecast full-year 2020 earnings of $2.25 per share, slightly below the $2.26 analysts are expecting, but investors clearly didn’t mind as highlighted by the stock’s stellar showing.

Investors hoping that 2020 would bring better things for the energy sector will have to either wait a little longer or avoid the group over the near-term because the coronavirus has sent oil into a bear market, weighing on the likes of Dow components Exxon Mobil (NYSE:XOM) and Chevron (NYSE:CVX) along the way.

In late trading, both stocks were higher, but today is just one day. Both oil giants are locked in multi-week losing streaks and both are down more than 8% to start 2020.

As I noted earlier this week, Sen. Bernie Sanders’ increasing momentum in the Democratic primary field is a problem for managed care providers, including Dow component UnitedHealth Group (NYSE:UNH). UNH was lower by about 1% today, extending its one-week slide to 7%, a decline materializing around news that Sanders is looking strong heading into the Iowa caucus next week.

A recent note by UBS analyst Keith Parker, cited by Barron’s, says that for every 10% Sanders and rival Sen. Elizabeth Warren gain in the polls, the S&P 500 could be subject to a 1% drop.

Both contenders are supporters of Medicare For All, the issue that has frequently plagued UNH stock. However, Sanders has recently been the more vocal proponent of nationalized healthcare.

I’m fond of the advice about not getting caught up in one-day moves, regardless of direction. That said, the major averages had every reason to close lower today and did just the opposite. Indeed, that’s a positive sign.

Conversely, there is some nourishment for the worriers among us. Strength in equities is largely being confined to Apple (NASDAQ:AAPL), Microsoft and a few other mega-cap names that are taking on disproportionately large shares of the S&P 500.