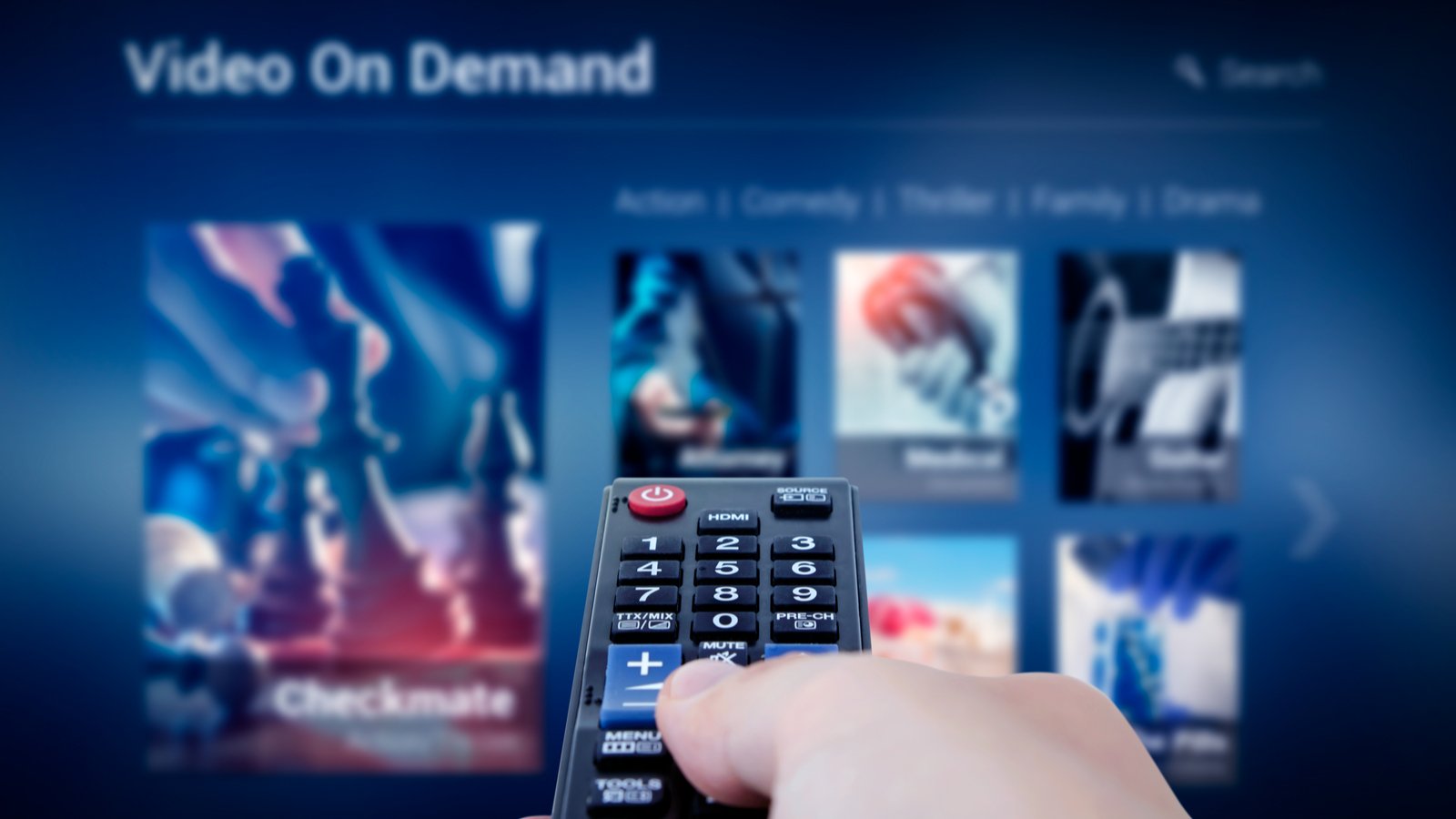 Not too long ago, cable television was all the rage. Now it’s a point of concern for the companies that offer it. This is thanks largely to Netflix (NASDAQ:NFLX), which changed the way the world wants to consume its media. Online streaming is the wave of the future and the rest of them are playing catch up, and this includes the House of Mouse. Disney (NYSE:DIS) and Apple (NASDAQ:AAPL), for example, are just some of the mega-caps that recently released their own streaming services.

This trend also gave birth to peripheral services like the one Roku (NASDAQ:ROKU) provides. Consequently there is renewed interest in all online viewership and the proof of this is that ROKU stock is up 160% in just 12 months. So it is evident that there are investments to chase among the streaming stocks. Today we focus on DIS, NFLX and the all mighty ROKU.

Before we start, it is important to share two overall opinions. First, in a bullish stock market these three stocks are also bullish. Second, I acknowledge that the equities made all time highs this week when the fear gauge CBOE Volatility Index (INDEXCBOE:VIX) was near 16. Clearly Wall Street is on edge and at these altitudes this leaves stocks vulnerable to corrections. So regardless of the conviction in any stock, it is wise to exercise caution. One easy way of doing this is by taking new positions in tranches and not all at once. This would then leave room to manage them on dips. 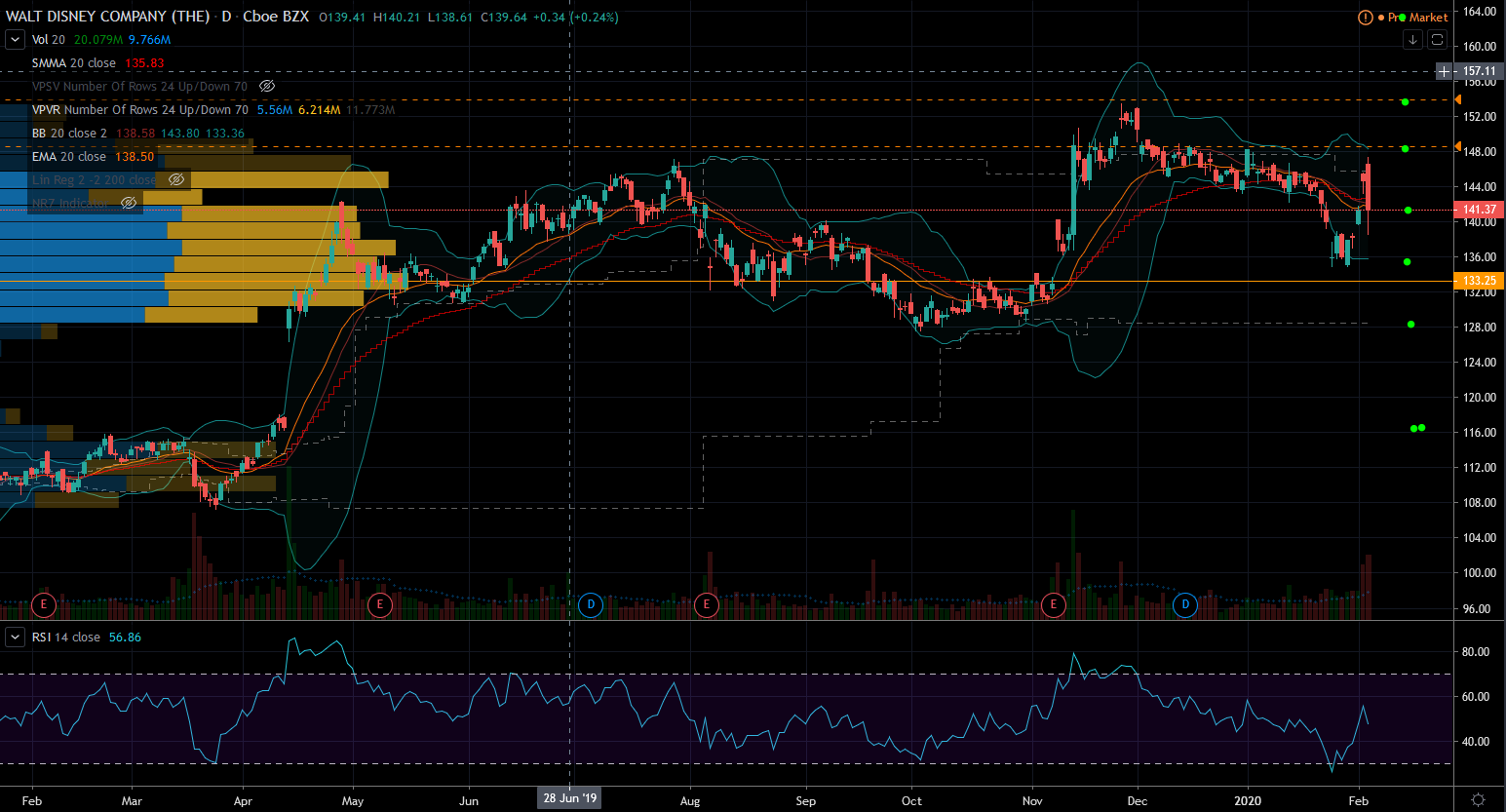 The reaction to the DIS earnings may not have screamed “buy, buy, buy,” but this stock is on fire. I don’t want to over-complicate things with quality stocks like this. It is a fact that anyone who owned it for ten years tripled their investment or more. So the obvious strategy is to own Disney stock through thick and thin as long as management continues its winning ways.

However, for the shorter term, there are dips along the way. Those who are looking to enter into new positions need to do some homework to avoid mistakes.

Management recently released their earnings and beat consensus, yet investors sold it anyway. This is despite reporting almost 30 million subscribers to Disney + and they barely just started the program. The subscription service will be fierce competition to that of Netflix. The adoption rate of Disney+ has exceeded estimates by a mile, but that wasn’t a surprise to anyone. What remains unknown is the impact that the streaming service will have on the top and bottom lines. The recent sell-the-news earnings event should not be judgment on the quality of the results. It has more to do with unrealistic expectations.

From a trading perspective, Disney stock has support through $133 per share. A new position starting point near that would make for decent odds of mid-term profits. There is the risk of completely pricing out the spike from last year, but that is unlikely unless the entire equity market corrects. The stock has modest valuations as it sells at a price-to-earnings ratio of 23 and 3.4 times sales.

In short, the company deserves the benefit of the doubt since it has proven it can execute on plans successfully over and again. In the last 12 months, the stock is up 25%, which is better than the S&P 500. This is further reason to take the positions in tranches rather than all at once. This would leave room to manage the risk should price go to the wrong way. 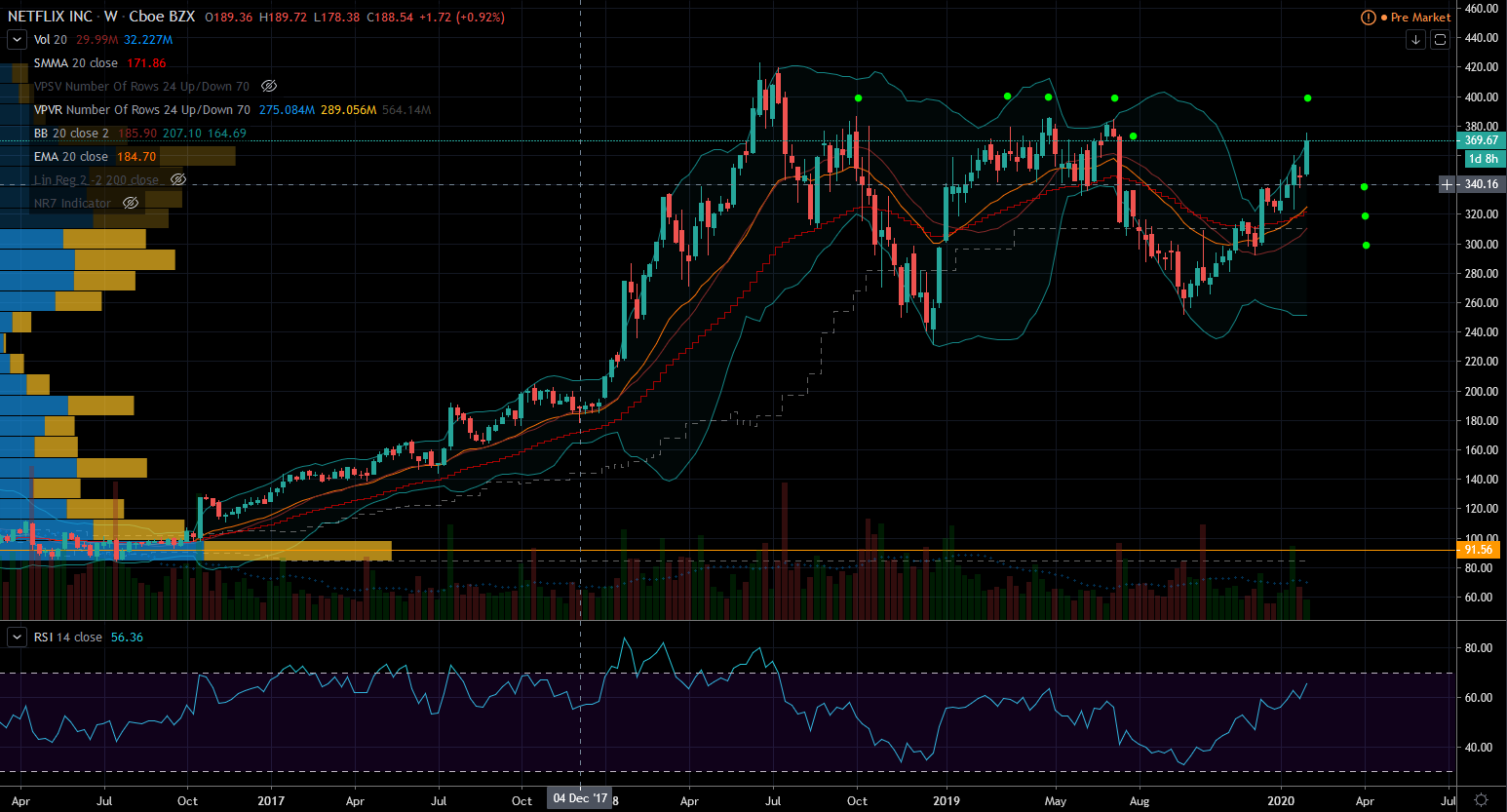 Just this week, Netflix stock triggered a bullish pattern and finally filled the gap to $362 per share. Arguably it has been in breakout mode from $315 per share, and this recent push brings it to about the measured move of that. So at this level and near $380 per share, it is risky to start new positions.

This has marked four prior failures dating back to October of 2018. So it’s up to the bulls to overcome it and use it as support. Until then, the assumption is that it is a resistance zone and not an obvious place to start new positions in it.

This is not the same as saying to short it because it’s a momentum stock and it can punish those who short it hard. My point here is that it might be best to miss out on a few possible upside bucks in order to avoid entering it at an interim top. The risk is that Netflix fades and the immediate risk is down $30 per share. Overall this is an expensive stock and has a lot of potential froth to shed. This is especially true because of the oncoming competition from several deep-pocketed mega-cap companies like DIS, Apple, Comcast (NASDAQ:CMCSA), etc.

In this case patience is the better way to approach Netflix here. The earnings catalyst is gone and it looks like it wants to trade in a seesaw fashion between $300 and $380 per share to consolidate this plateau. The world owes Netflix a lot because they established the concept of streaming as the way to go for the future. But this is not a guarantee that they will be the sole winner forever. They spend a lot of money on content, which is there ace for growth. But if money gets expensive again or if their growth slows, Wall Street will punish the stock hard. Between these two, I’d rather bet on Disney because it’s less of a speculative trade. 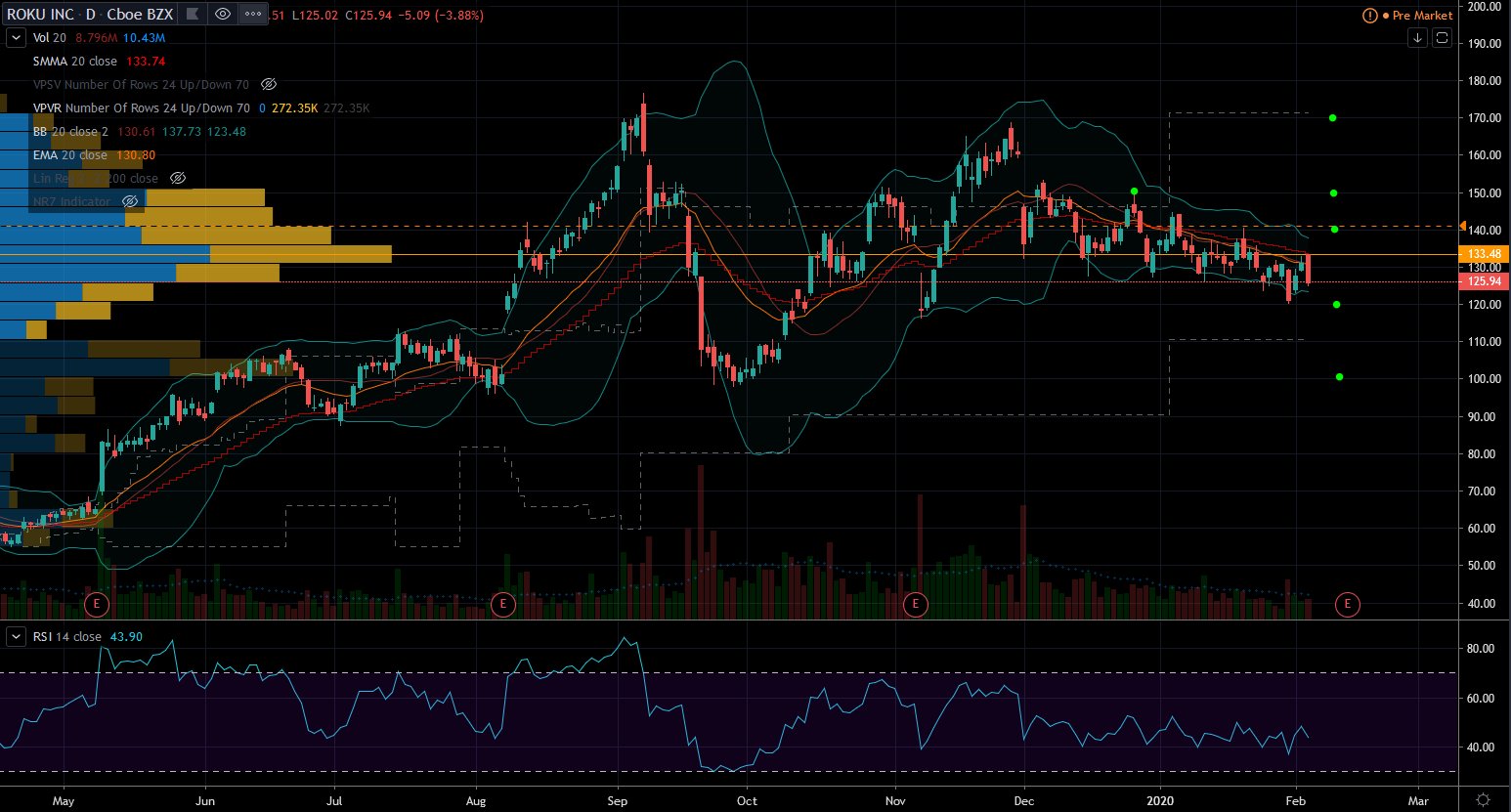 To follow the streaming trend, all traditional media companies now offer their own direct streams. So this opens doors for ROKU to capitalize on that. They are the aggregator, so the more companies stream the more opportunity there is for it. That is why I included it in my write up today even though they are content-agnostic. Consumers use ROKU to watch Disney and Netflix shows.

Fundamentally, I have concerns. It has been in business for 17 years and it still cannot make a profit. However, I reluctantly give them a pass on that because during their early years they did not have the Netflix effect. Maybe now is when they will ramp up exponentially.

Technically the ROKU stock range has tightened and a move is likely coming. Losing $120 per share could trigger a retest of $100. Conversely, if the bulls can break out from $140 per share they can retest the highs of last year. In the meantime, it’s in no-man’s-land except for those who trade shorter-term. The breakouts in either direction offer trading opportunities.

When dealing with speculative stocks like NFLX and ROKU, the options markets offer good alternate ways to bet on their upside with margins of safety. By selling put options much lower than current price, investors can be bullish a stock with a margin of error. With Disney I’m less concerned with protection because of the quality of the stock itself. But when it comes to potentially frothy stocks that are more speculative having a buffer is good piece of mind.