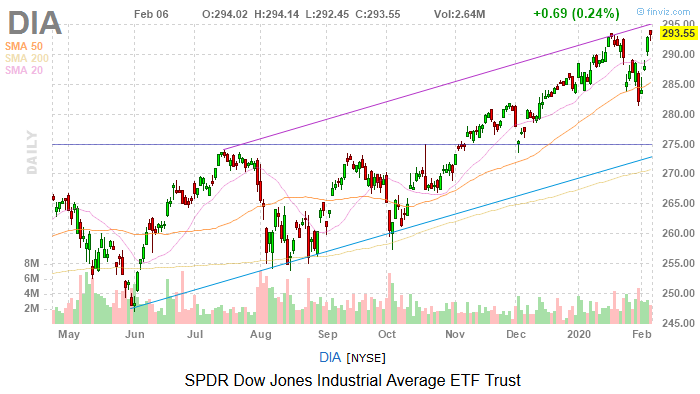 Thursday was another strong day for equities as the Dow Jones Industrial Average hit another all-time high, positioning the S&P 500 for its best weekly showing in about two months. More than 50 stocks listed on the New York Stock Exchange hit 52-week highs today, including several Dow components.

A broader catalyst for stocks today was news out of China that the country will halve tariffs on $75 billion worth of U.S. imports. This is exclusive of the Phase I trade accord inked last month and almost certainly a move by Beijing to support an economy that is being hampered by the novel coronavirus scare. Perhaps this move by China will set the stage for productive talks between the two sides on a second, larger rounder of trade talks later this year.

In late trading, just half of the Dow’s 30 components were higher, but at the company-specific level, good news outweighed the challenging today.

Boeing has faced plenty of challenging headlines in recent months, self-inflicted to be sure, but things took a turn for the better on Thursday on reports that the company is working out some kinks with a new software package for the 737 Max. Test flights for the jet could be forthcoming.

Speaking at an aviation conference in London, Federal Aviation Administration (FAA) chief Steve Dickson said that test flights for the 737 Max could happen over the next few weeks. Dickson did, however, stop short of mentioning a time frame for when the jet could return to passenger service.

I’ve been mentioning Exxon Mobil (NYSE:XOM) quite a bit lately because oil prices have been slidng and the stock has started the year as one of the worst-performing Dow components. One issue investors are growing concerned isn’t just the ability of Exxon to extend its 37-year dividend increase streak, but can the company maintain the current payout?

Although conventional wisdom is that Exxon faces near-term cash flow headwinds, which could persist for several years, some analysts believe the dividend is safe this year and that it could even be raised.

Even with that positive commentary, Exxon shares declined 1.43% today. Similar dividend concerns are not being mentioned with regards to rival Chevron (NYSEARCA:CVX) because that company’s free cash flow is more than enough to cover its current dividend obligations.

Microsoft (NASDAQ:MSFT) was the second-best Dow performer today after Boeing and one reason easily could be news out yesterday that the CIA, yes, that CIA, is opening its cloud computing contracts, once dominated by Amazon (NASDAQ:AMZN), to more competition.

Last year, Microsoft surprisingly won the $10 billion JEDI deal from the Pentagon, chastening rival in Amazon in the process.

In other words, Microsoft knows how to win government contracts. Additionally, suddenly high-flying International Business Machines (NYSE:IBM) deserves some consideration in this conversation because it’s a cloud player, too, and could make a run at some some CIA deals.

There’s no getting around the fact that stocks are enjoying a very nice day, against a challenging coronavirus backdrop no less. Another near-term wildcard could emerge tomorrow morning in the form of the January jobs report. If that report disappoints, it would provide a credible profit-taking opportunity.

But there’s also some chatter that a surprisingly mild January may have boosted job creation to start the year, so the report could be a surprise, not a disappointment.