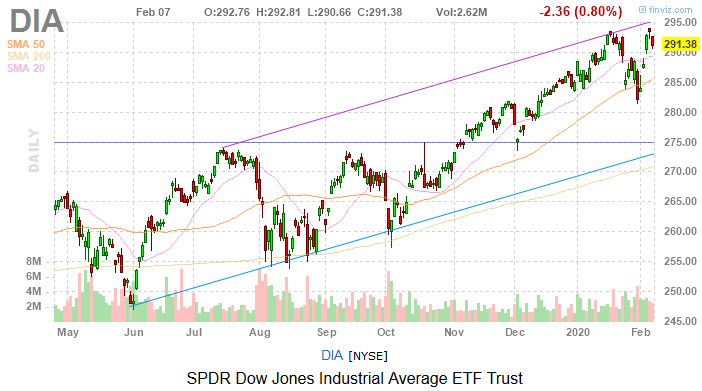 Stocks took a breather on Friday with the new coronavirus from China being the likely culprit. The number of documented cases of the respiratory illness has swelled to over 30,000 globally with about 600 deaths. As such, investors are growing concerned that China’s economy — the world’s second-largest — will take a hit as a result.

News was better on the jobs front as the January report showed the addition of 225,000 new jobs last month, well ahead of the 158,000 economists were expecting. The unemployment increased to 3.6%, but that jump isn’t bad because it corresponds with a higher labor market participation rate.

Perhaps most importantly, particularly because the market has been propped up by the consumer to some extent, are data showing average hourly earnings rose 3.1%.

The jobs report was good, but not good enough to add to the number of Dow winners, of which there were just four in late trading.

All of the Dow’s financial services names declined today, but the focus was mostly on Goldman Sachs (NYSE:GS) and JPMorgan Chase (NYSE:JPM).

The reason for the Friday malaise for bank stocks is that with the Federal Reserve’s Comprehensive Capital Analysis and Review (CCAR) looming, some analysts are expecting this year’s version to be a little more stressful.

That doesn’t mean the big banks are in trouble. They’re not, but the CCAR is important because that’s how the likes of Goldman and JPM get permission from the Fed to boost dividends and buybacks.

Believe It With Boeing

There’s no denying that Boeing (NYSE:BA) is adept at commanding headlines, usually of the challenging variety. One thing the aerospace company hasn’t done in awhile is garner a “buy” rating from a sell-side analyst.

That changed Friday when Benchmark analyst Josh Sullivan initiated coverage of Boeing with a “buy” rating and a $375 price target.

“In our opinion, the FAA has not rejected the 737 MAX on any fundamental basis but has rather sparred with Boeing over timelines,” said the analyst.

Encouraging commentary to be sure, but Boeing was still among Friday’s Dow losers.

In modest fashion, Microsoft (NASDAQ:MSFT) was higher in late trading, extending the stock’s gain to over 6% for the week.

Microsoft is already up more than 16% to start 2020 and with plenty of good reasons, but that’s not stopping some technical analysts from saying that the stock is due for a pullback. That’s not a bold call and it’s one rooted in the fact that Microsoft is indeed overbought.

However, it’s worth noting that stocks don’t always decline simply because they’re overbought. But if that happens with Microsoft, consider it a buying opportunity.

A dip not to be bought, at least not until the coronavirus situation improves, is Dow Inc. (NYSE:DOW). This is a China-sensitive materials name and its price action reflects this reality. It was one of the worst-performing names in the blue-chip index today and is already saddled with a double-digit year-to-date loss.

Looking back at the first four days of the this week, stocks performed well, so today’s retreat is by no means alarming. After all, we’re not going to all-time highs every day.

As for next week, well, that could be a bit more challenging due to a spate of retail earnings reports, Tuesday and Wednesday congressional testimony from Federal Reserve Chairman Jerome Powell, the run up to the New Hampshire Democratic primary and the lingering coronavirus issue.