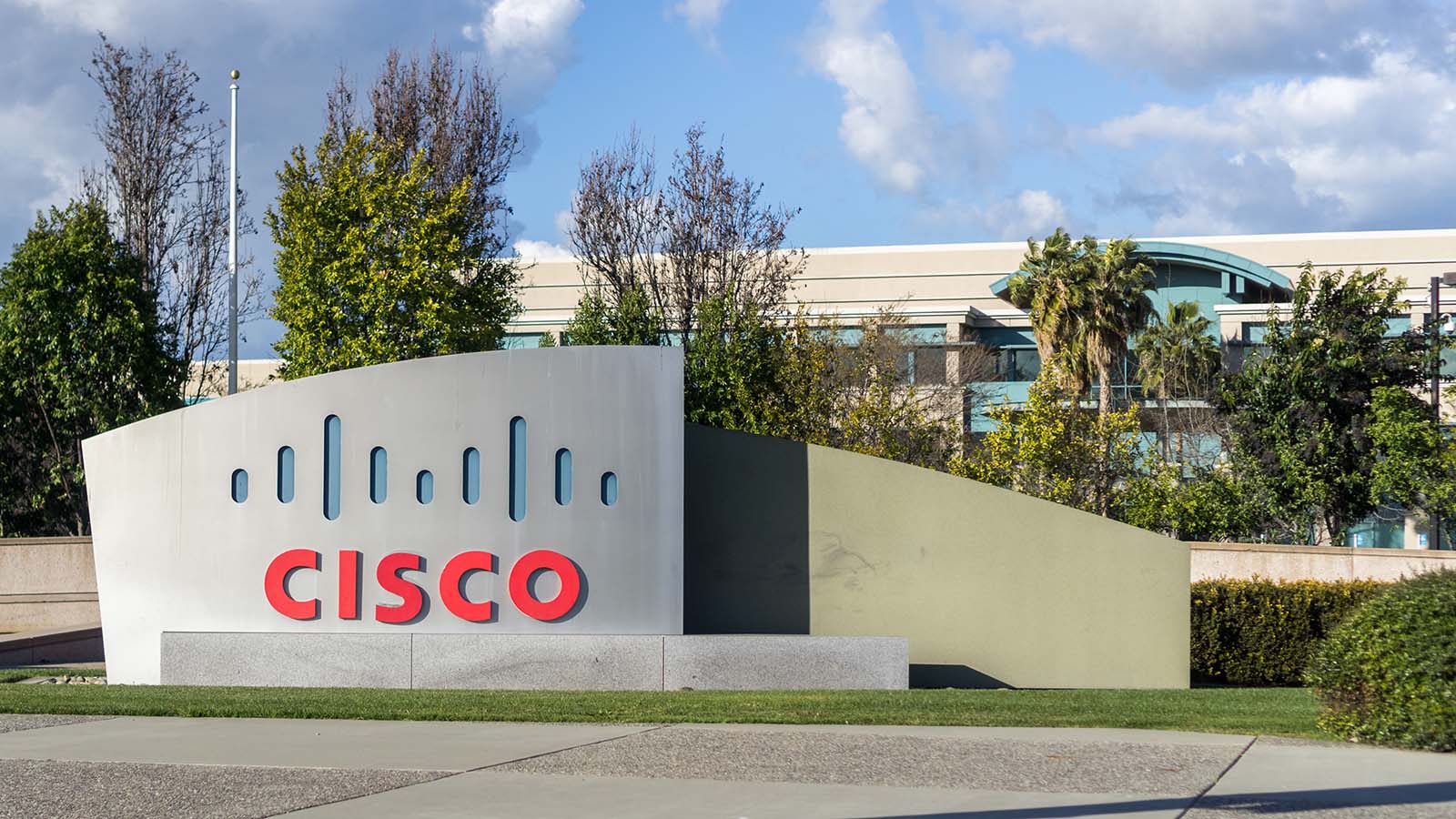 Cisco Systems (NASDAQ:CSCO) has basically been flat since August 2019. And that was after it had fallen almost 20% from a five-year peak. That leaves Cisco stock looking very cheap now. 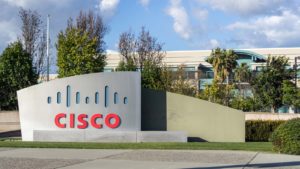 Moreover, CSCO did not please investors with its latest earnings guidance. For example, it reported 12% higher earnings per share for the quarter ending Oct. 26, 2019. But its outlook going forward in 2020 was weak.

Cisco’s management had expressed concerns about the trade war last quarter. They were worried it would lead to a global slowdown. Cisco was worried capital spending plans by its clients would be lower. But that has not happened. And the trade deal that was recently signed should at least dampen those worries.

But the coronavirus from China has hit the region hard since then and will definitely have an impact. In fact, it remains to be seen how bad the non-Chinese economic impact will be. But in China, economic activity has clearly slowed down.

Cisco breaks out its Asia, Pacific, Japan and China (APJC) segment revenues. It accounted for 14.4% of total revenues. But in its fiscal first quarter ending Oct. 26, revenue was down 9% year-over-year in that segment. 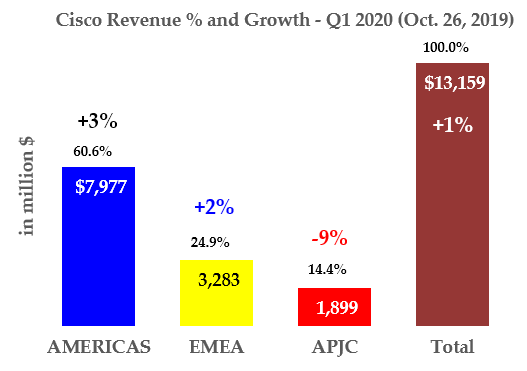 With the virus spreading through China and slowing down its growth, that segment is likely to be down again this quarter. That won’t help Cisco’s revenue growth but since it is only a small portion of the total, the impact will be muted.

Right now the market may be overlooking Cisco’s powerful cash flow. During the last 12 months (LTM), Cisco produced $14.8 billion in free cash flow. This represented a huge margin of over 28% of sales.

Moreover, that FCF figure was up 9.5% from the previous year. You can see the trend in the chart below. It shows that the average LTM FCF growth has actually been on the rise each quarter.

In fact, I estimate that LTM FCF will rise 3.7% for the quarter ending Jan. 31, 2020. This is based on a growth estimate of 3.7% in year-over-year growth in sales and also an average FCF margin. 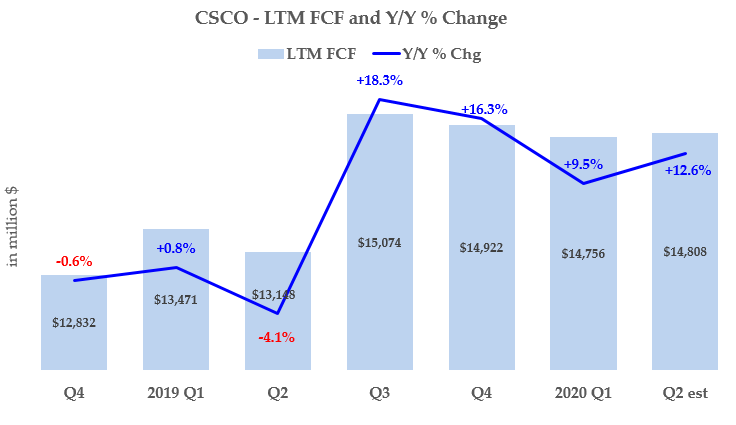 The chart shows that FCF should actually increase 12.6% on an LTM basis in Q2 2020. This is very important since it allows investors to see how cheap CSCO stock actually is.

For example, the FCF estimate of $14.8 billion represents 7.3% of Cisco stock’s market value. That is a very high FCF yield. It represents $3.49 per share in FCF.

The company’s share repurchases are very important. For example, in the last three years ending Oct. 26, 2019, Cisco has cut its shares outstanding by approximately 783 million shares, or 15.6%. It used its free cash flow dollars to repurchase those shares.

Cisco’s dividend per share has risen by 20.7% (from 29 cents to 35 cents) in the last three years. But here is what is interesting. The actual outlays by the company for its dividend payments have only climbed by 13.6%. The difference is completely due to the share reductions.

Let’s put all this in perspective. Yes, earnings are down on a quarter-over-quarter basis. And the stock price’s flat movement over the past quarter seems to reflect a feeling that growth will slow in the upcoming earnings report.

But Cisco stock is now very cheap. Not only does it sport an attractive FCF yield of 7.3%, but its prospective price-to-earnings ratio is just 14.6 times. That is very cheap for a growing technology company.

I have shown that the CSCO dividend growth rate is strong. In the past three years, FCF growth and share repurchases have pushed up dividends per share by almost 21%.

Moreover, this coming quarter Cisco is will likely announce another dividend per share increase. It usually does this during its fiscal third-quarter between February and April.

I expect Cisco will hike the dividend to at least $1.48 per share (on an annual basis) from $1.40 right now. That would give Cisco a dividend yield of 3.1%. This is also very attractive to investors. Expect to see Cisco stock to move higher based on this.

As of this writing, Mark Hake, CFA does not hold a position in any of the aforementioned securities. Mark Hake runs the Total Yield Value Guide which you can review here. The Guide focuses on high total yield value stocks. Subscribers receive a two-week free trial.