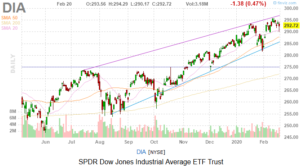 For a while, it has felt as though U.S. equities have been immune to the Covid-19 outbreak. That thesis was dealt a blow Thursday. The major domestic benchmarks slumped as global investors grew pensive that the epidemic will weigh on earnings.

Underscoring the point that today was a rough one, 23 of the Dow’s 30 components were lower in late trading. The Dow’s technology components were mixed on the day, but with the index being price-weighted, it was decked by losses by Intel, Apple (NASDAQ:AAPL) and Microsoft (NASDAQ:MSFT).

Part of the problem is that two novel coronavirus deaths were reported in Japan and one in South Korea, two of the most tech-heavy countries in the world and major markets for U.S.-based technology companies.

Goldman Sachs (NYSE:GS) and JPMorgan Chase (NYSE:JPM) were two of the Dow’s leaders yesterday, but the wind came out of those sails today on news that Morgan Stanley (NYSE:MS) is acquiring E*Trade (NASDAQ:ETFC) in a bid to bolster its exposure to retail clients.

The deal, which is slated to close in the fourth quarter, is the latest in the brokerage space this year and another sign that these firms are warming up to smaller investors. Sources say Goldman was mulling buying E*Trade, but decided against the move, allowing rival Morgan Stanley to swoop in.

There was another Democratic debate last night, and just going by what folks are saying on Twitter (NYSE:TWTR), it appears Sen. Bernie Sanders was the winner. Good news for him and his supporters. Bad news for UnitedHealth Group (NYSE:UNH), which was among the Dow’s worst losers today. Sanders is a Medicare For All backer, an issue that has long been a thorn in the side of UNH stock.

All things considered, oil prices performed admirably today. Exxon Mobil (NYSE:XOM) and rival Chevron (NYSE:CVX) did not, and there’s at least one straightforward reason as to why. Global airlines are forecasting the first decline in passenger traffic this year since 2003 due to the coronavirus epidemic. Airlines obviously use jet fuel, a higher-end product refined from crude.

The coronavirus outbreak is indeed testing investors’ bullishness. For example, BlackRock previously forecast a “V-shaped” recovery in global economic activity, but how well that plays out is likely to be tested.

“Yet the depth and width of the ‘V’ this time are highly uncertain,” said the asset manager in a note out today. “This outbreak could be more disruptive than past ones because it could be more severe, and because of greater reliance on global supply chains.”

BlackRock notes that previous viruses have been followed by pent-up demand-driven rebounds, but that this time could be different.