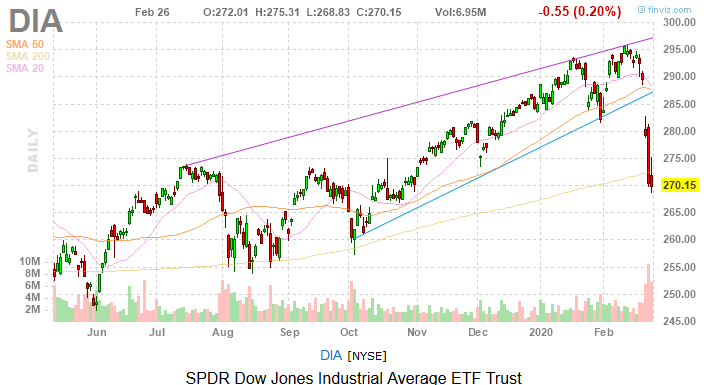 Perhaps the best thing that can be said of the three marquee equity benchmarks today is that the trio did not reprise the glum performances notched on Monday and Tuesday. It would be difficult to call the price action on Wednesday a “comeback” or even a “rebound,” but it was undoubtedly less bad than what was seen in the first two days of the week.

While stocks didn’t perform as poorly today as they did on Monday and Tuesday, investors would be right to be concerned about the Wednesday outcome for a couple of reasons, not the least of which is the fact that the aforementioned indexes traded significantly higher earlier in the day only to see those gains recede.

Second health officials are saying that the U.S. now has 15 confirmed cases of the coronavirus from China, but this number appears to be fluid. However, fears of the COVID-19 virus spreading in earnest provided a catalyst for previously moribund 3M (NYSE:MMM) stock today because the company is major maker of surgical masks.

In late trading, seven of the 30 Dow stocks were higher. Not an impressive number, but that’s seven more than closed higher on Tuesday.

Crude oil prices dipped for a fourth consecutive session, extending a run that has it ranking as one of the worst-performing commodities to this point in 2020. That means the drag on Exxon Mobil (NYSE:XOM) and rival Chevron (NYSE:CVX) continues.

As I’ve previously noted, the lethargy in the energy patch means the sector is becoming a less important part of the S&P 500. Entering Wednesday, energy’s weight in the S&P 500 was just four basis points ahead of the utilities sector. It seems the latter passing the former in terms of heft in the benchmark index is inevitable.

Disney (NYSE:DIS) slumped 3.7% today and was the Dow’s worst offender on news that Bob Iger is departing as chief executive officer and will be replaced by Bob Chapek. Most recently, Chapek served as chairman of Disney Parks, Experiences and Products and he has been with the company for over three decades, so he has the credentials to lead the media and entertainment conglomerate.

The reaction by investors to the Chapek news may be a bit on the dramatic side because he had long been rumored to be one of the leading candidates to replace Iger. For his part, Iger is pledging to remain engaged in Disney’s creative efforts after departing his role as chief executive.

Boeing (NYSE:BA) was a Dow winner today even after the Federal Aviation Administration (FAA) ordered the inspection of the entire fleet of 737 Max jets to assess the airworthiness of those planes.

Boeing said it doesn’t expect this directive to delay its efforts to get the plane back in the skies, which investors are hoping will happen in the late second quarter or early in the third quarter.

The FAA is looking for which 737 Max planes have a defect Boeing revealed in December. The planes that are identified will need to be fixed, something the company has pledged to do, before getting back in the air.

The number of reported coronavirus cases in China is declining, albeit modestly, but with attention turning to a slew of other countries, hopes for a quick resolution and subsequent sharp recovery in equity markets appear to be on hold for the moment.

“More companies revising guidance due to the outbreak, economic headwinds seem increasingly likely to persist beyond Q1 and some pickup in skepticism about prospects for V-shaped recovery,” according to FactSet.

Add to that, there’s a growing consensus that the Federal Reserve won’t act in terms of cutting rates due to the virus perhaps until the back half of the year.