Yikes, the selling is getting downright ugly out there. The S&P 500, Nasdaq Composite and Dow Jones Industrial Average were again hammered in the stock market today, all down between 4% and 5%. It marks the sixth straight decline for U.S. equities, as stocks are already down 10%-plus from the highs.

In the last 20 years, the market has only fallen seven times by 10.7% or more in a five-day span. Five of those seven occurrences came during the dot-com bust and the Great Recession. The other two occurred in the last 11 years (once in 2011, and once in 2015).

In other words, it’s fair to say that a drop of this magnitude is uncommon. But what were investors missing? The S&P 500 was rallying alongside bonds and gold. All three assets were hitting or nearing new 52-week highs, while companies were warning about their upcoming results. News reports highlighted China was coming to a temporary standstill.

Everyone from Apple (NASDAQ:AAPL) to energy stocks to semiconductors to Nike (NYSE:NKE) — and far more — signaled the impact. The latest impact comes to Microsoft (NASDAQ:MSFT).

Microsoft warned that it doesn’t expect to meet fiscal third-quarter guidance for its PC and Windows division. Management expected that unit to contribute $10.75 billion to $11.15 billion in sales this quarter, although management did not change their overall guidance.

By the way, Microsoft is the number one holding in the SPDR S&P 500 ETF (NYSEARCA:SPY), just ahead of Apple. Here’s a look at the SPY now, as it’s fallen back to the October breakout level and the 200-day moving average. So far, Thursday’s bounce has been weak, but it’s into an important area. Note: The SPY took out Thursday’s low into the close. 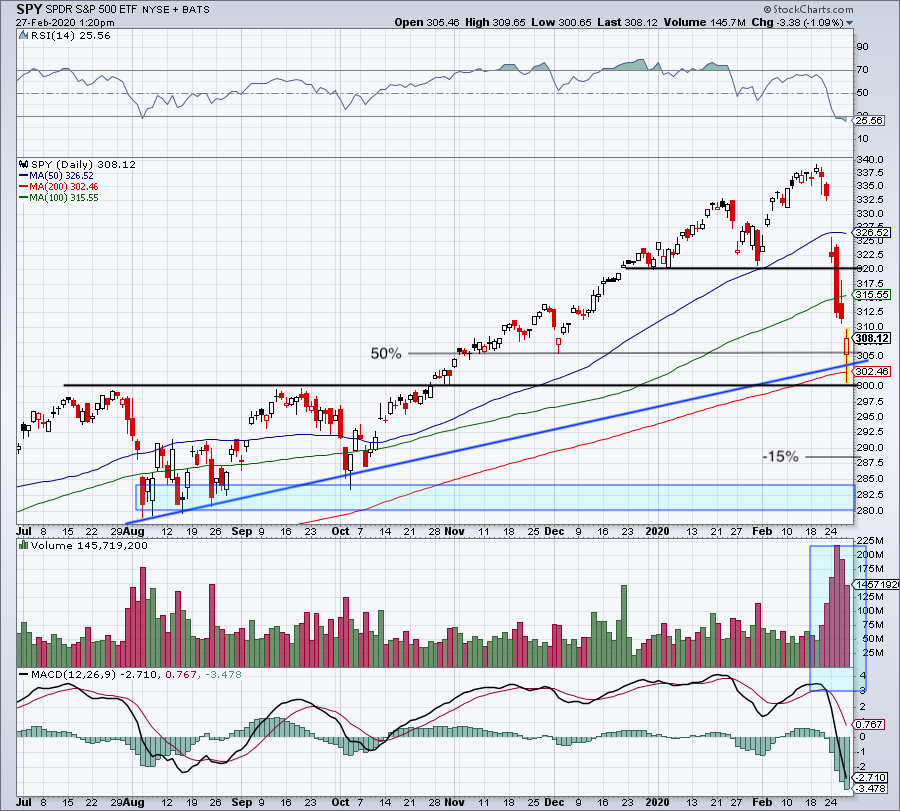 Further, Microsoft announced that it will pull out of the Game Developers Conference. The conference is scheduled for March 16-20 in San Francisco, and Microsoft is the latest company to make such a move for a given conference.

Also done out of fear of the coronavirus from China, Facebook (NASDAQ:FB) is canceling its F8 Developers Conference. Well, mostly. Held in early May in San Jose, Facebook is canceling the in-person component to the event, but is still working on ways to make the show go on in some form.

Tesla (NASDAQ:TSLA) run is coming to an abrupt end — at least for the time being. Shares are down more than 25% from the highs made earlier this month. The move comes after Tesla saw a 46% sequential drop in new car registrations last month. One can only assume that February’s numbers will be as bad and likely much worse.

If everyone is losing, which stocks may benefit during the coronavirus scare? How about some stay-at-home stocks? According to MKM Partners, investors should take a closer look at three groups: video games and internet stocks, work-from-home stocks and consumer shopping and food delivery stocks.

The work-from-home group includes Slack (NYSE:WORK) and Zoom Video (NASDAQ:ZM), the latter of which has been on fire.

Don’t forget about GrubHub (NYSE:GRUB) and Blue Apron (NYSE:APRN), the latter of which closed higher by 23%.