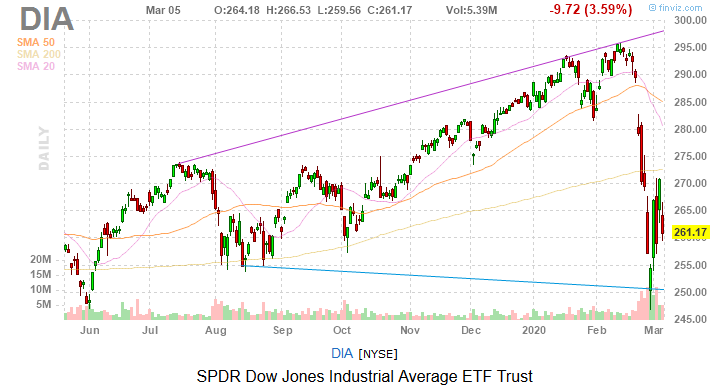 In another case of one step forward, two steps back, stocks tumbled today amid fresh fears regarding the coronavirus from China. Ultimately, stocks gave up plenty of the gains accrued on Wednesday. Technology and financial services names, two of the S&P 500’s three largest sector weights, led the market lower today.

Confirming that riskier assets will have a difficult time making inroads as long as the coronavirus continues dominating news flow, yields on 10-year Treasuries sank to 0.90% today, while gold advanced. Bond yields fall as prices rise.

Adding to the pressure on stocks today were comments from various senators, indicating that the White House will miss its original goal having a million coronavirus test kits available by the end of this week. The other issue is training folks on how to properly use those kits.

The consumer, often viewed as the bedrock of the U.S. economy, is being crimped by the epidemic, too. Bloomberg’s Consumer Comfort Index dropped to 63 as of March, down from 63.5 in the prior week, according to the news agency.

Overall, those factors were enough to bring us back to an ugly situation we’ve seen a few times in recent weeks: none of the 30 Dow stocks pointed higher in late trading.

A day after gaining about 4%, United Technologies gave up those losses and then some. Given the lack of headlines directly pertaining to UTX stock, it’s not unreasonable to suspect that the Thursday tumble could be a case of industrial infection by way of Boeing.

Already dealing with the woes, many of which are self-inflicted, associated with the 737 Max controversies, Boeing appears to be struggling due to the coronavirus as commercial airlines grapple with significantly reduced travel.

The struggles in air travel could prompt airlines to scale back purchases of new aircraft and that has nothing to do with the 737 Max, meaning Boeing has a lot to contend with these days.

Disney (NYSE:DIS) is under siege due to the coronavirus and related travel cancellations. With today’s tumble, shares of Disney reside about 30% below the 52-week. That’s a bear market and a half.

With the epidemic forcing scrapped travel plans and so many people to stay in, that would appear to be a catalyst for the Disney+ streaming service. While Disney+ is expected to be a significant contributor to the company’s top and bottom lines in the future, it’s not enough right now to offset declining theme park and movie theater visits.

Yes, Disney offers rebound potential, perhaps one of the more credible Dow stocks on that front, but there is a lot of risk in this once beloved name over the near term.

Apple (NASDAQ:AAPL) was one of the least bad Dow losers today, but that’s not saying much and no one is going to be excited about a loss of about 3%.

The culprit, though not surprising, was commentary from key Apple supplier Foxconn, which said revenue in the most recently completed quarter fell by the most on a year-over-year basis due to factory closures in China at the hands of the COVID-19 outbreak.

In brighter news, those plants are back up to 50% capacity and Apple is just 10% below its 52-week high. These days, that’s not bad.

On a day like Thursday, positive vibes are hard to come by, but if you’re looking for something along those lines, I’d point to China. Yes, China. Looking at a chart of the MSCI China Index, it looks like Chinese stocks have put in a coronavirus, a process that took more than a month from the emergence of the first case.

There are no guarantees that a similar process will avail itself in U.S. stocks, but the playbook is clear: if investors have credible reason to believe the virus is being contained and not worsening here, it could facilitate a legitimate rebound, not these on again/off again, one-day rallies we’ve seen this week.