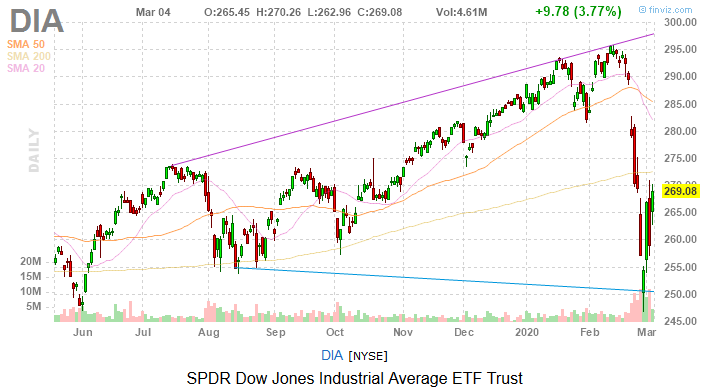 Former Vice President Joe Biden’s strong showing in the Super Tuesday primaries coupled with bets that other global central banks will join the Federal Reserve in loosening monetary policy due to the coronavirus from China were among the catalysts boosting equities on Wednesday.

Earlier today, the Bank of Canada joined the Fed in lowering rates, stocking speculation the Bank of England (BOE), European Central Bank (ECB) and Bank of Japan (BOJ) will soon follow suit. That may happen, but the both the BOJ and ECB are already running negative interest rates, meaning there are only so many arrows left in their respective quivers.

Stocks also got a lift today on news that Congress has approved nearly $8 billion in spending aimed at the coronavirus as U.S. fatalities caused by the respiratory illness jumped to 11.

Even with remaining coronavirus challenges, Wednesday’s equity market action was strong enough to deliver a scenario not often seen this year: all 30 of the Dow stocks were higher in late trading.

With Biden’s resounding showing last night, he entered Wednesday with a delegate count of 566 to 501 for Medicare For All supporter Sen. Bernie Sanders, explaining why UnitedHealth and other healthcare stocks supported the Dow.

Add Pfizer (NYSE:PFE) and Johnson & Johnson (NYSE:JNJ) to the UNH mix and three of the Dow’s top 10 names today hailed from the healthcare sector. Dealing a blow to Sanders’s hopes, Biden scored a victory in Maine, which neighbors Sanders’s home state of Vermont.

The race isn’t over, but as been noted in this space so often dating back to last year, investors engaged with the likes of UnitedHealth probably don’t want to see Medicare For All become a reality. As such, a more moderate candidate is seen as better news for the politically sensitive healthcare sector.

As noted above, all 30 Dow stocks were in the green in late trading, including downtrodden Exxon Mobil (NYSE:XOM) and rival Chevron (NYSE:CVX), but some analysts are growing exasperated with traditional energy stocks.

In a note to clients Wednesday, Jefferies analysts compared the energy sector to the 1962 New York Mets. For those not familiar with baseball history, the ’62 Mets are widely regarded as one of the worst teams in the Major League history, having notched a record of 40-120.

If you regularly follow me here, you know that American Express (NYSE:AXP) has been making regular appearances and usually for all the wrong reasons.

Frequently viewed as one of the Dow stocks highly vulnerable to the coronavirus outbreak due to its intimate ties to business travel and tourism, no one would have been surprised if AXP said its first — and perhaps second-quarter — results were going to be dismal.

However, CFO Jeffrey Campbell said at the KBW Fintech Payments Conference that the company’s guidance isn’t going to be affected by the coronavirus epidemic.

It’s not hyperbole to say that that news from AXP is one of Wednesday’s more pleasant surprises.

Not So Boring Today

However, with U.S. shoppers stockpiling goods like something out of one of those doomsday-prepper TV shows, Procter & Gamble (NYSE:PG), Coca-Cola (NYSE:KO) and Walmart (NYSE:WMT) were all up at least 4% today.

Rate cuts aren’t enough to ease crimped supply chains or to get folks traveling again, indicating that what investors really want to hear is that the U.S., China and others are close to containing the epidemic.