Investors in cannabis stocks through 2019 suffered a bumpy ride and hoped for a better 2020. However, their hopes haven’t panned out so far. And unfortunately, the dream of fast-paced mainstreaming and federal legalization in the U.S. has only led to disappointment.

In an email to InvestorPlace, Andrew Schnackenberg, Professor of Management at the University of Denver Daniels College of Business, described the ongoing struggle associated with cannabis’ mainstreaming in America:

“[A]lthough strides have been made to legalize marijuana in many states, marijuana does not enjoy the same level of social support in any of those states that other recreational substances such as alcohol does. ...Innovations that are successful will go a long way in legitimizing the industry more broadly, helping to quell the cultural struggles that have accompanied its legalization.“

Therefore, the success of the cannabis sector and its component companies hinges on social acceptance and a sense that the industry is legitimate. The cannabis companies that have a real chance at staging a comeback are the ones that can prove their viability. And oftentimes, a partnership with a famous company can help to achieve this.

With that said, three companies in particular are real standouts and might be worth your attention — even as cannabis stocks are out of favor. So, let’s take a closer look at these names. 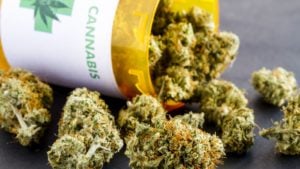 As I said above, one way to prove a company’s legitimacy is through a partnership with a much bigger company. And this is what Cronos Group (NASDAQ:CRON) has achieved with a cash infusion from tobacco giant Altria (NYSE:MO).

In late 2018, Altria took a 45% stake in Cronos — plus the right to exercise warrants. In turn, this addition increases Altria’s stake to as much as 55%.

It might seem odd for Cronos to use a tobacco company to achieve mainstream acceptance. However, Altria is a massive and cash-rich company. Additionally, it’s also encouraging that Cronos didn’t quickly burn through the $1.8 billion cash injection from the Altria deal. That’s likely a reason MKM Partners analyst Bill Kirk recently raised his rating on CRON stock from “hold” to “buy” — but lowered his price target from 12 CAD to 11 CAD.

Also, Kirk even went so far as to say, “Altria is the most important vendor into U.S. convenience stores.” And he might just be right about this member of the cannabis stocks.

Much like Cronos, Tilray (NASDAQ:TLRY) has partnered with a mega-company. And that has helped Tilray to acquire both capital and legitimacy in the eyes of the investing community.

Indeed, it was big news when Tilray announced a strategic partnership with Anheuser Busch Inbev (NYSE:BUD) to create cannabis-infused beverages. So, if you feel that cannabis derivatives are the future, then TLRY stock might be a solid investment.

Also like Cronos, Tilray has a decent amount of cash — and that’s something you can’t say about all cannabis companies. Tilray actually finished 2019 “in the green” with a cash position of $97 million. Moreover, Tilray’s revenues during the fourth quarter of 2019 increased by a whopping 202% compared to the same quarter of the previous year.

That’s encouraging, and might indicate that TLRY stock is a bargain at the current price among other cannabis stocks.

Yet another cannabis company associated with a famous firm is Canopy Growth (NYSE:CGC), whose controlling shareholder is Corona beer producer Constellation Brands (NYSE:STZ). It seems quite possible that Constellation has put pressure on Canopy to cut costs. Or, maybe it’s just a coincidence that since the Constellation partnership, Canopy has announced plans to shutter two greenhouses and cancel the opening of another greenhouse, and has revealed that it will cut 500 jobs.

Either way, it’s heartening to know that Canopy is taking control of its cash burn.

Furthermore, Canopy is a leader in the cannabis industry. And reducing spending will help to prove that there are disciplined companies in this sector. That said, Jefferies analyst Owen Bennett seems to concur with Canopy’s reduction in production space, saying, “We also think this is a positive signal that the new CEO [David Klein] is serious about instilling the financial rigor that many have been hoping for.”

So, collectively, new management, a notable partnership and fiscal restraint are all strong reasons to consider a position in CGC stock among other cannabis stocks.