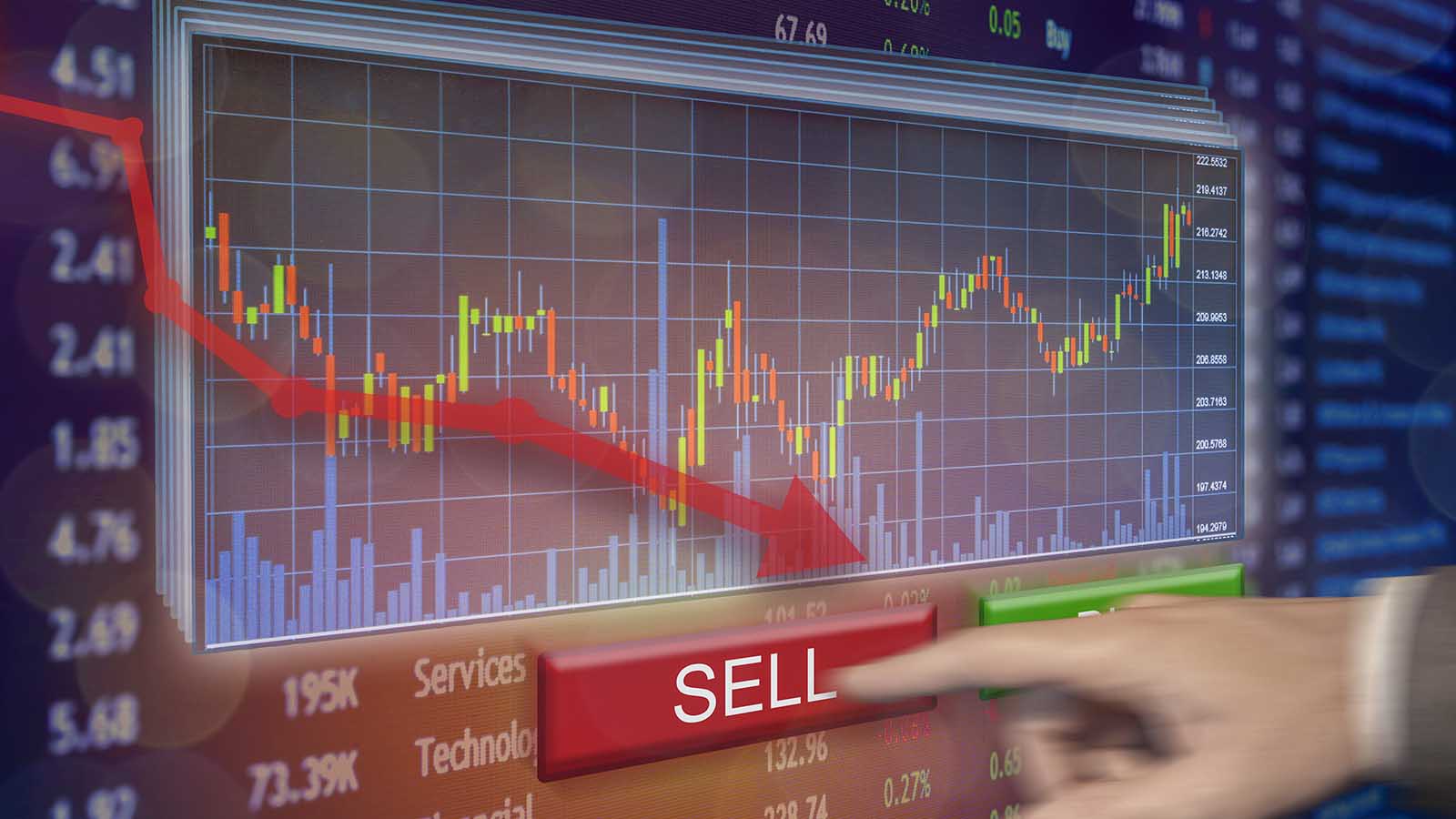 But the bond market, where the more mature and dialed in traders operate, is screaming at the top of their lungs that something serious is wrong with the economy and financial markets. The interbank lending market is tightening up again. And the yield on the 10-year Treasury has fallen below 0.9%, a record low.

Bad news all around as a COVID “quarantine village” gets built in Washington state. Further losses are likely, led by these five Dow Jones Industrial Average components that are in meltdown mode: 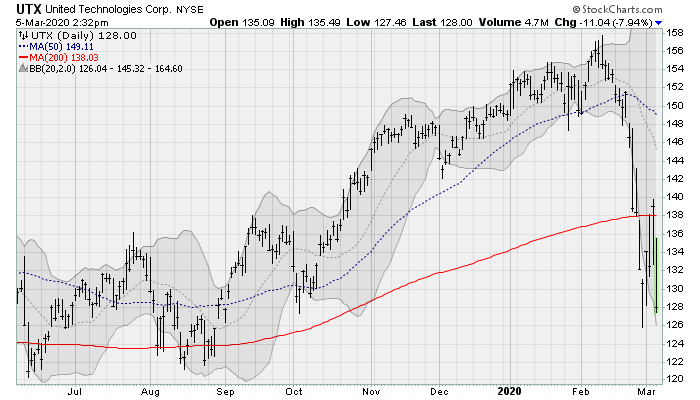 Industrial conglomerate United Technologies (NYSE:UTX) is testing its late February low, down nearly 8% as I write this, after a failed attempt to climb back up and over its 200-day moving average.

Watch for a possible drop back to the multi-touch lows set throughout 2019 near $120. A failure there would give way to a drop back to the late 2018 low near $100, which would be worth a loss of roughly 20% from here.

With the looming divestiture of its Otis elevator and Carrier HVAC businesses, United Technologies is set to become more focused on the aerospace industry, especially with its acquisition of Raytheon (NYSE:RTN). Which is happening at a time when tourism and travel is collapsing. Whoops. 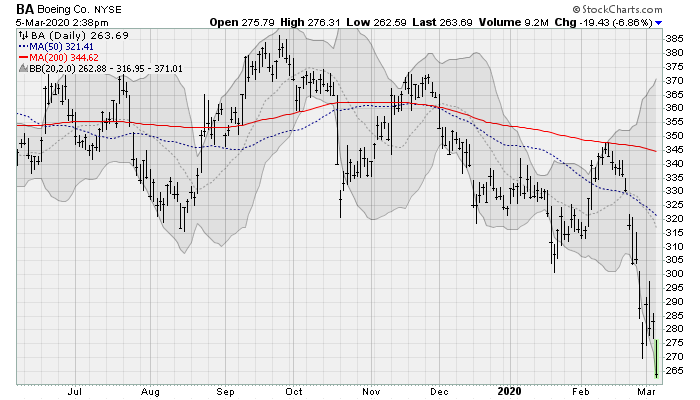 The bottom is falling out from Boeing (NYSE:BA) as COVID-19 slams the airline industry at a time when the 737 MAX remains grounded. The 737 production line was already under pressure as the company runs out of places to park newly built but still-grounded aircraft. Now, the need to keep sick workers at home will further slow production, pinching cashflow, and put more pressure on earnings.

Shares have violated their 200-week moving average for the first time since 2016, breaking down out of a three-year consolidation range. There is a lot of downside potential from here, potentially returning to the levels seen throughout 2016 near $120, which would be worth a greater than 50% decline from here. 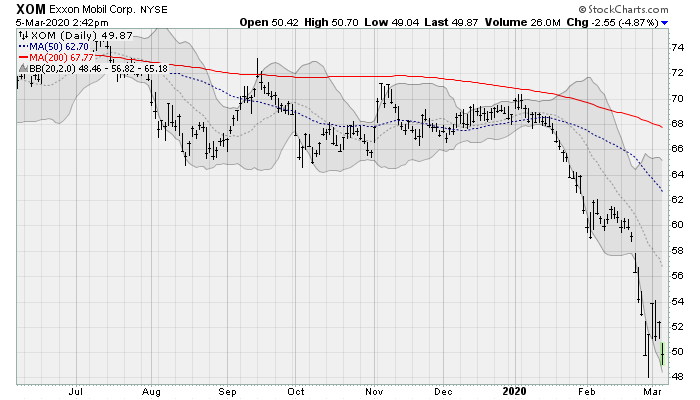 The energy sector has been among the hardest hit during this pullback, as crude oil prices cratered on worries over end demand. Less airplanes flying means less jet fuel. Fewer Chinese consumers on the road means less gasoline. Something you can see playing out in real time courtesy of Capital Economics analysts.

Already, shares are testing lows not seen since late 2010 as shares recently exited a long multi-year consolidation range going back to 2013. OPEC is trying to respond to the cratering of demand by cutting supply, but Russia isn’t cooperating. Until then, XOM shares will continue to melt lower. 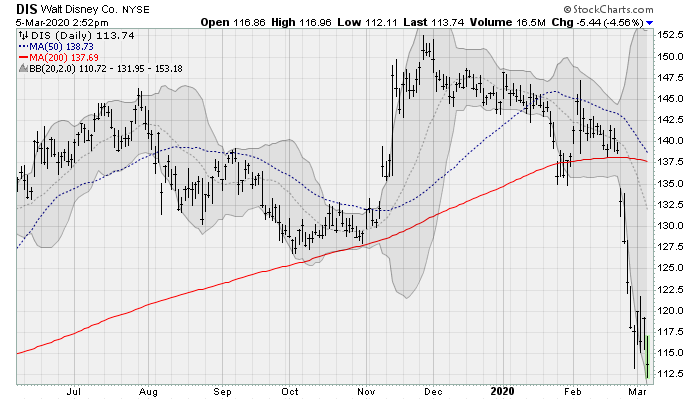 Disney (NYSE:DIS) is threatened by the COVID outbreak after the company put big investments in its parks. New themed attractions connected to Star Wars and Marvel now risk being emptied by worried tourists and possible closures (as was the case for Disney parks in Shanghai, Hong Kong, and Tokyo). Shares have already dropped nearly 30% from their recent high and look set for another test of their 200-week moving average.

The company has already been on shaky ground with the recent and unexpected departure of its longtime CEO Bob Iger. He was replaced by the former head of parks and experiences, revealing the board was focused on this area of growth going forward. An area that is now under direct threat. 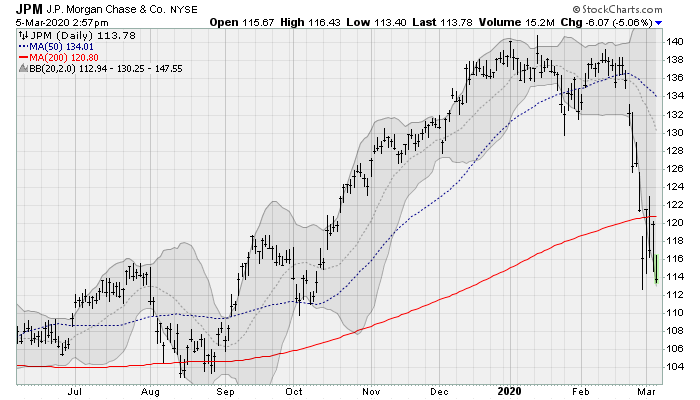 JPMorgan Chase (NYSE:JPM) shares have fallen back to lows not seen since early October, down nearly 20% from their recent high to slice below their 200-day moving average. Wall Street banks are already looking at contingency plans for keeping their workers at home, with JPM unveiling “Project Kennedy” this week for exactly that reason, keeping thousands at home.

The bank is also at the center of the still inexplicable rise of interbank lending stress that could suggest deeper liquidity problems in the financial system — bringing back bad memories of the global financial crisis.

As of this writing, William Roth did not hold any of the aforementioned securities.