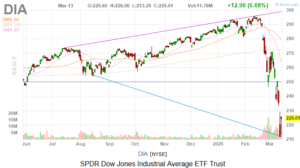 Stocks soared Friday even as investors digested news that the White House will soon deem the coronavirus outbreak a national emergency in the U.S. That sounds ominous, but this is an opportunity for the Trump Administration to bring much needed clarity and leadership to a scenario that is plaguing the world’s largest economy and fraying investors’ nerves in the process.

History proves that investors should be leery of one-day rallies in the confines of bear markets, which we are unfortunately in right now thanks to equities’ brutal start to March. Still, there were some decent data points for investors mull over today, including one pertaining directly to the ever important consumer.

The initial reading of the University of Michigan said consumer confidence index for March showed a decline to 95.9 from 101 last month, but that’s still better than the 95 reading economists expected.

That didn’t translate to big gains for the Dow’s consumer discretionary names, but Home Depot (NYSE:HD) was flirting with a gain of 1% in late trading.

Treasury Secretary Steven Mnuchin said talks with congressional Democrats to provide paid sick leave for workers and free coronavirus testing are progressing and that was likely another catalyst for 26 of the 30 Dow stocks residing in the green late Friday.

As I’ve frequently noted in recent days, financial services stocks have been under siege due in part to the Federal Reserve’s emergency 50-basis point interest rate cut revealed earlier this month. That’s a credible reason for the sector to decline due to subsequent pressure on net interest margins.

Yet Goldman Sachs led the Dow today and JPMorgan (NYSE:JPM) wasn’t far behind a day after reports surfaced that a growing number of economists are calling on the Fed to lower rates to 0% due to the COVID-19 pandemic and some are even calling for the central bank to make that move happen at its upcoming meeting next week.

Cutting rates to 0% may be a near-term solution, but the rub is that once the Fed does that, its options for further monetary stimulus are significantly limited.

If you think the financial stock scenario playing out is entertaining, then get a whiff of the action in Disney (NYSE:DIS) today. Battered DIS stock was another one of the Dow leaders today despite what under normal circumstances would be considered negative news flow.

Some Life in Apple Stock

In what one of its better intraday showings in weeks, Apple (NASDAQ:AAPL) jumped more than 5% Friday. On Thursday, the company said all of its retail stores in China are reopened. Earlier today, Apple announced its popular World Wide Developers Conference (WWDC) scheduled for June will take place online.

Wells Fargo analyst Aaron Rakers upgraded Apple to “overweight” today, citing what has now become an attractive valuation on the iPhone maker. The analysts did pare estimates on iPhone shipments, but noted some of that slack could be made up for by growth in the company’s services segment.

Merck (NYSE:MRK) and Pfizer (NYSE:PFE) were also among the Dow’s winners Friday after the companies updated investors on a Phase III clinical trial on the JAVELIN Head and Neck 100 study, which is aimed at treating head and neck cancer. Interestingly, these stocks moved higher despite termination of the trial.

“The alliance has accepted the recommendation of the independent Data Monitoring Committee (DMC) to terminate the JAVELIN Head and Neck 100 trial, as the study is unlikely to show a statistically significant improvement in the primary endpoint of progression-free survival (PFS) based on a preplanned interim analysis,” according to a statement.

For those searching for one more positive data point to close the week, there is the following. Data from the Washington Service indicate that in the first two weeks of March, insider buying of stock among corporate executives reached the highest levels in nine years.

That doesn’t mean the market has bottomed, but it’s worth remembering that insiders usually only buy their company’s stock for one reason: because they think it’s going to appreciate.