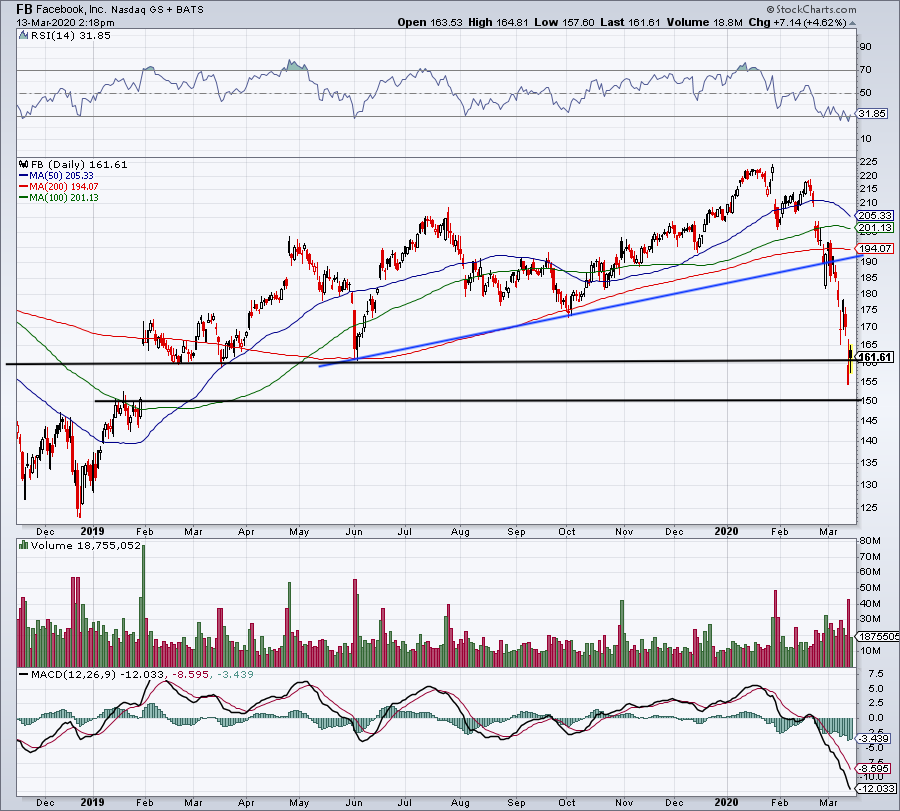 Facebook (NASDAQ:FB) has been hammered, as shares have fallen from almost $225 in January to a recent low of $155. The stock wasted little time breaking below uptrend support (blue line) and its major moving averages.

The hard thing about both Facebook and the market? The speed in which these declines have taken place. It’s trapped a lot of bulls at higher prices, as they are unable to get out of their positions without incurring massive losses. These big gaps make it so that stop-losses can be inefficient too.

Below Thursday’s low and a gap-fill into the low-$150’s is possible. If that level gives out, more selling pressure can ensue. 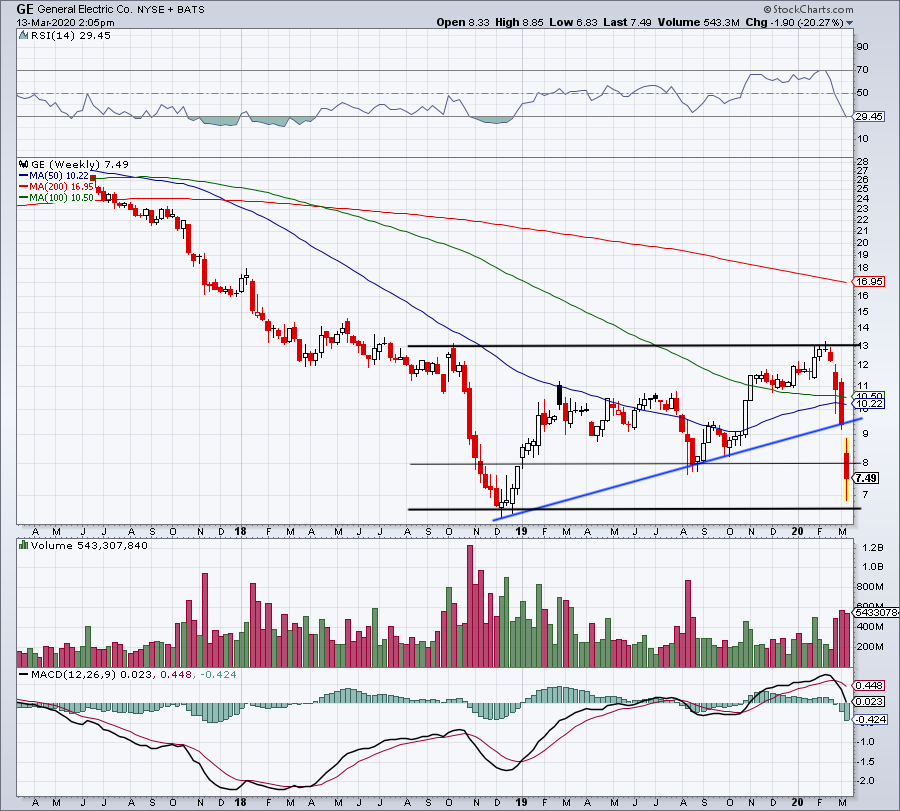 Things have gotten ugly for General Electric (NYSE:GE). Worries about the aerospace sector have investors concerned, on top of the volatility and market selling pressure weighing on stocks.

Shares dipped below the $7 mark briefly this week. A move back over $8 could send the stock back toward prior uptrend support (blue line) around $9.50. However, investors’ concern here is a break of the 2018 lows.

Below the mid-$6’s could cause a further flush in the stock, particularly if there’s more selling in the broader market. GE is slowly but surely turning things around, but it’s not in the best of positions yet. Let’s see if the lows hold. 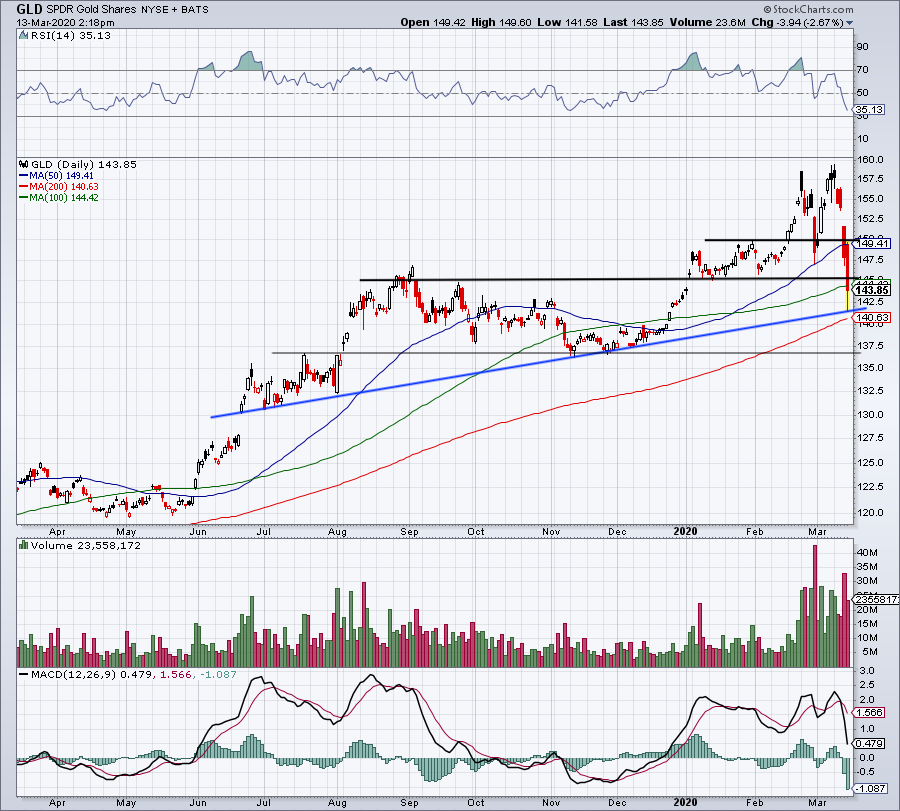 People call gold a safe haven. That could be said about multiple assets, many of which have come under pressure over the past week as investors and institutions sell what they can, not necessarily what they want.

I think that’s the case with gold, depicted above via the SPDR Gold Trust ETF (NYSEARCA:GLD).

For now, the uptrend (blue line) and the 200-day moving average are holding as support. From a fundamental perspective, there are a lot of reasons to own gold at this point. But currently, the technicals are mixed. 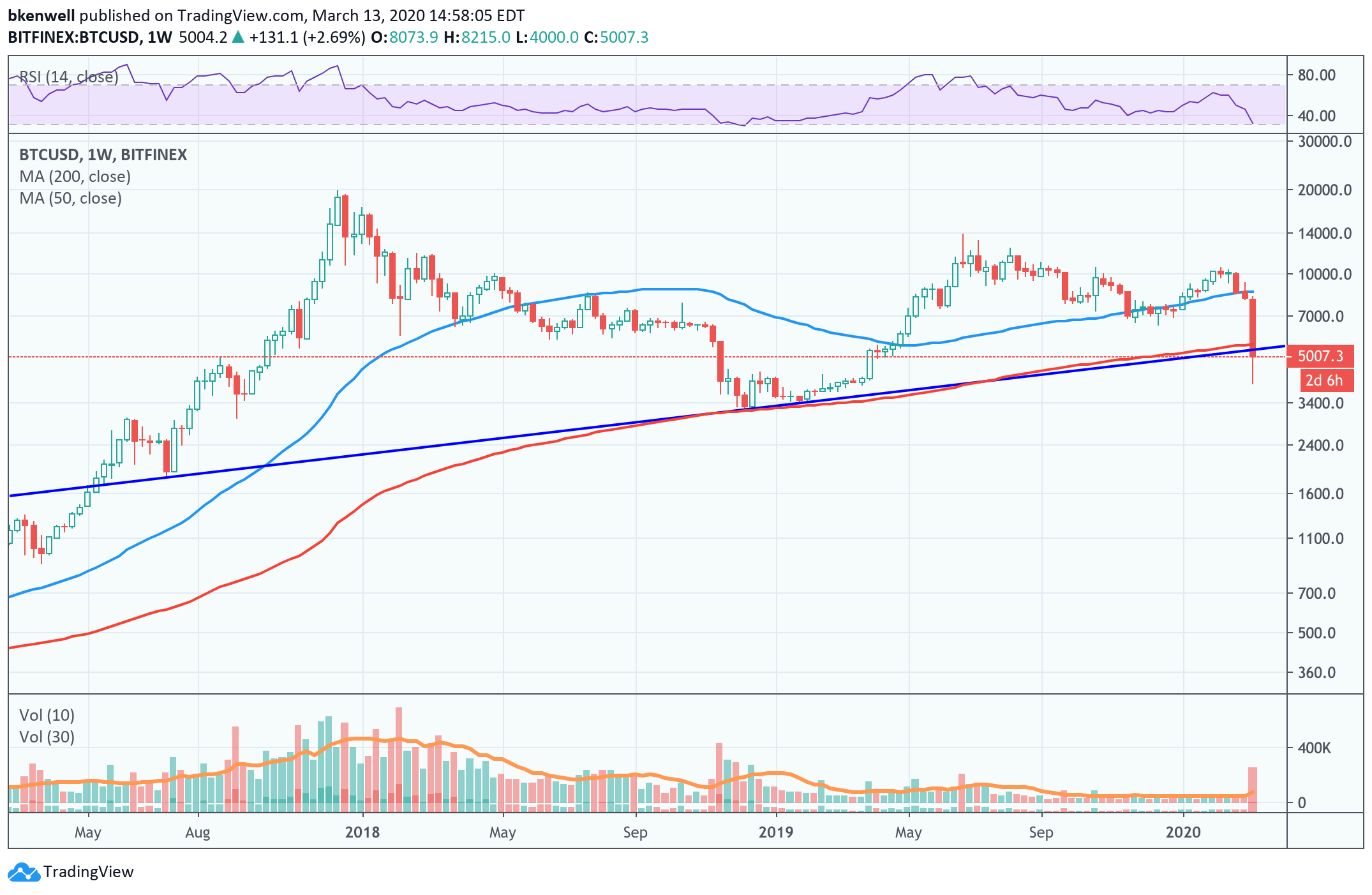 Like gold, so much for bitcoin acting as a safe haven during times of duress. However, the digital currency’s performance has been much worse than the yellow metal. Bitcoin has plunged almost 40% so far for the week. At Thursday’s low, bitcoin was down 50% for the week.

That is not indicative of a healthy safe haven. Some use the Grayscale Bitcoin Trust (OTCMKTS:GBTC) to trade bitcoin, but it doesn’t matter. Both are under fire.

Bitcoin is below its 200-week moving average, as depicted above. It’s also below uptrend support (blue line). Reclaiming those marks would require a move north of $5,500. That would put the November low near $6,500 on the table.