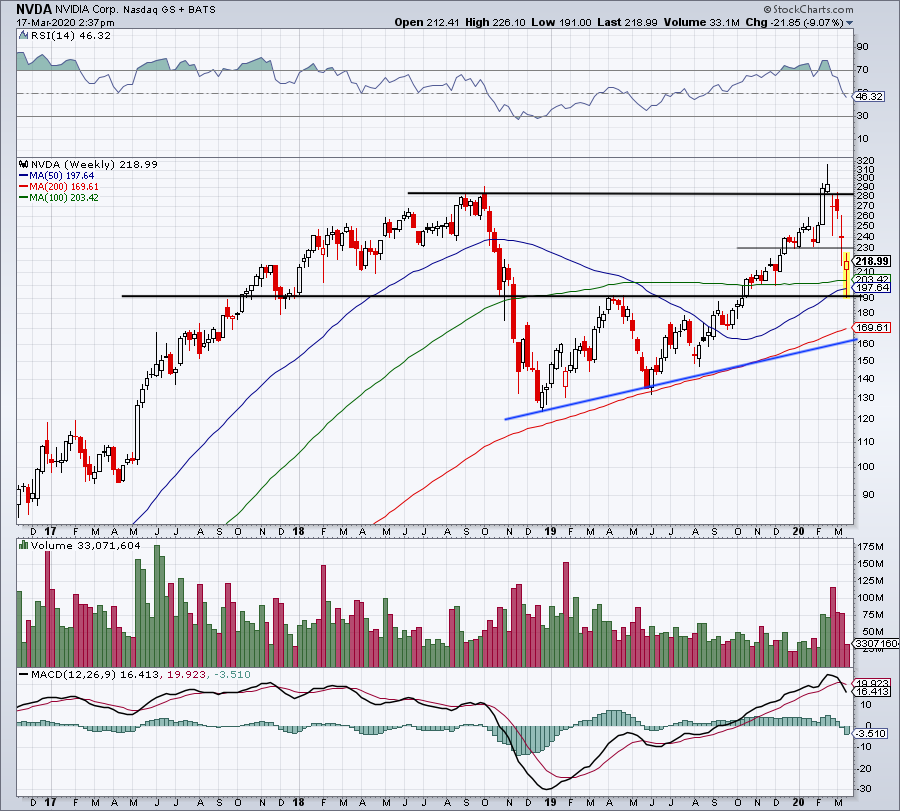 After a brutal day on Monday, bulls got some relief on Tuesday with a modest bounce in stocks. That said, let’s look at a few top stock trades as we near midweek.

Once the sharks get a whiff of blood, the prey doesn’t stand much of a chance. You can see something similar unfolding in Boeing (NYSE:BA). After the company drew down the entirety of its $13.8 billion loan, the company’s financials became a concern.

It’s had a credit downgrade and is reportedly asking for aid. Less than a month ago, this was a $300 stock. A few hours ago, shares bottomed at $101.25.

At least investors have a level to measure against now, as the stock has already ricocheted back above $120.

Boeing’s price action has been littered with stunning declines and plenty of gaps. It’s made investing in the name quite difficult as well. For many investors, this name will be a no touch simply because of the volatility — and who can blame them?

For those buying, it’s best done in very small size, as who knows what tomorrow will bring. If the financials prove solid, this is likely a $200-plus stock. More concerns could drive it back down toward $100, though.

To me, Nvidia (NASDAQ:NVDA) at or below $200 is a no-brainer. Management previously said the coronavirus would have a minimal impact on revenue, but that hasn’t stopped the stock from falling significantly from its highs.

On the daily chart here, you can see how $190 is acting as support, as is the 200-day moving average.

On the weekly chart below, the stock has both the 50-week and 200-week moving averages near $200 as support.

Starbucks (NASDAQ:SBUX) was first hit by the coronavirus from China news in January. As retail closes up in the U.S. now, shares are really getting clobbered.

Now, the stock is struggling to reclaim the prior breakout mark between $58 and $60.

For long-term investors, a dip into long-term support would be an opportune time to initiate or accumulate a position in this long-term winner.

We recently noted that, while we really like Visa (NYSE:V), there were multiple reasons this stock could hit new 52-week lows. That came to fruition on Monday, with shares bottoming at $147.98.

I’m not sure if that low will ultimately hold or if more losses are on the way. But as consumer spending dries up — even temporarily — Visa and other credit card companies are set to feel the pain.