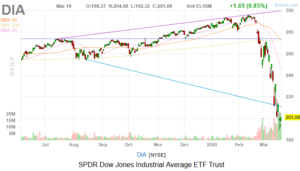 At this point, weary investors will take the gains, but Thursday’s upside in domestic equities was muted amid concerns that the coronavirus outbreak will soon yield discouraging employment data.

Earlier today, the Labor Department said weekly jobless claims vaulted to 281,000 for the week ended March 14, increasing by 70,000 from the prior week (211,000 claims in the week ending March 7). Unfortunately, pain on the jobs front is likely to get worse near-term as this week has brought a spate of layoff announcements across a variety of industries, with travel and leisure among the most hard hit. Some economists are already predicting next week’s jobless claims number could surge to two million.

In better news, U.S. Treasury Secretary Steven Mnuchin said he backs the idea of cash payments of $1,000 to adults and $500 to kids over the next several weeks if Congress supports the effort. It’s possible that another round of payments could be delivered at a later date if the economy continues to languish.

Some critics balk at the $1,000 figure, saying the White House needs to think bigger. Regardless, with the government ready to help the airline industry (again), including floundering Boeing (NYSE:BA), the optics of a bailout not involving ordinary Americans are terrible and the Trump Administration knows as much.

It wasn’t a spectacular day by any stretch, but 20 of 30 stocks were higher in late trading, good for one of the better ratios seen in weeks.

On a day in which oil notched its best intraday gain on record, it would have been reasonable to expect Exxon Mobil (NYSE:XOM) and Chevron (NYSE:CVX) to post larger gains. Rather, the two largest domestic oil companies were merely tepid Dow winners, indicating investors aren’t taking the bait due to just one good day for oil prices.

While it’s not a bailout per se, the White House is stepping up to help the struggling U.S. energy industry — one decimated by production hikes by Russia and Saudi Arabia — saying it will add 30 million barrels of U.S.-produced crude to the strategic petroleum reserve.

Some Good News for Microsoft

On a relative basis, Microsoft (NASDAQ:MSFT) has been one of the less battered names in recent weeks and it delivered some strength Thursday, jumping more than 5% on some favorable news for its Teams platform, a rival to Slack Technologies (NYSE:WORK). In fact, it looks the coronavirus forcing folks to work from home is turning into a catalyst for for Teams, providing another positive chapter to Microsoft, which isn’t lacking for catalysts this year.

The number daily active users of Teams users stands at 44 million, up from 20 million last November and over the past week, the number of Teams clients with 100,000 or more active users is up to 20 from 14.

Walt Disney (NYSE:DIS) has experienced one of the most breathtaking declines attributable to the coronavirus, but the stock surged more than 8% today after the company offered up some comments that weren’t all that surprising.

Disney noted that the impact of the coronavirus makes it difficult to forecast near-term earnings and that the pandemic could create a major disruption in consumer behavior, including reduced movie theater and theme park visits and increased consumption of streaming platforms, such as Disney +.

The market is far from being awash in good news, but there are some positive points to consider today. First, Thursday was the first day of the past nine that the S&P 500 didn’t move 4% or more. Second, look at the aforementioned jobs data and comments from cyclical Disney. Those could be signs that markets are baking in poor news related to the COVID-19 outbreak.

None of that means the news flows is about to turn overwhelmingly positive, but if markets can show some signs of digesting expected negativity and ease into calmer waters, improvement could manifest itself in the coming weeks.