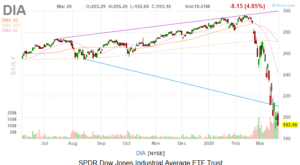 Equities faltered on Friday after California and New York — two of the three largest states by GDP — announced shutdowns for all non-essential businesses, and after Senate Republican pitched a stimulus plan the markets viewed as disappointing.

On the stimulus front, there is talk that it could take months, not weeks for eligible Americans to get their checks. Making matters worse is that there are eligibility requirements at all. The GOP Senate plan caps recipients at those that made $99,000 or less in 2018. Both President Trump and Treasury Secretary Steven Mnuchin said the plan doesn’t go far enough.

The Senate GOP plan wants to give $1,200 to single folks that made $99,000 and less in 2018 and $2,400 to married couples that made $198,000 or less in that year, but the White House is pushing for something broader, indicating that a second round of stimulus could be bigger and more encompassing.

Even some Republican senators are saying that the proposal, in its current form, falls short of adequately stimulating an economy that’s very likely in a recession now and will probably be in one until the third quarter.

As such, just four of 30 Dow stocks were in the green in late trading.

Walt Disney (NYSE:DIS) has been among the Dow’s most repudiated names this month, a theme that continued Friday. One reason could be the delay of the Disney + launch in India, a massive, potentially lucrative market for the company based on sheer size.

That alone wasn’t the lone reason DIS stock dropped 7.72%, but it’s one more point underscoring how vulnerable this name is to recession talk and the COVID-19 pandemic.

Due to its status as one of the largest producers of respirators and surgical masks, there has been some chatter about 3M Company (NYSE:MMM) as a bullish play on the coronavirus. However, the stock has mostly ignored that thesis and did so again Friday, sliding 10%.

Worse yet, that decline arrived after 3M said its boosting production of some products essential to fighting the virus and protecting those on the front lines of treating it.

“Since the COVID-19 outbreak, 3M has doubled its global output of N95 respirators to an annual rate of over 1.1 billion per year, or nearly 100 million per month,” said the company. “The company is also maximizing production of a wide range of other products used in the COVID-19 response globally including hand sanitizers, disinfectants and filtration solutions as the pharmaceutical industry works to find a vaccine to fight the virus.”

Not Helping, at Least Not Yet

With no end in sight to oil’s bear market and even less clarity on when demand will rebound in earnest, Exxon Mobil (NYSE:XOM) continues ranking among the worst Dow stocks on a day-to-day basis. Even good news is having a hard time permeating this downtrodden name.

This week, two high-ranking Exxon executives have bought at least $1 million worth of their employer’s shares. While it’s often said that insiders buy their company stock for a single reason — because they believe the shares are going to appreciate — that theory hasn’t stopped the bloodletting in Exxon stock.

Exxon rival Chevron (NYSE:CVX), itself no angel when it comes to recent losses, got some love from Wells Fargo analyst Roger Read that said CVX is now cheap enough that it’s close to be tempting.

Goldman Sachs (NYSE:GS) was among the worst Dow offenders today, too. One issue plaguing banks are concerns that central bank stress tests didn’t forecast a scenario as brutal as the coronavirus. To be sure, U.S. banks, including Goldman, are far sturdier today than in the aftermath of the global financial crisis, but a global recession and a world awash in negative rates will be near-term headwinds on financial services names.

Speaking of Goldman, the bank’s revised GDP estimates out earlier today were certainly another factor plaguing stocks to close the week. Close your eyes if you want to avoid the gore, but Goldman is forecasting a 6% first-quarter GDP slide followed by a 24% plunge in the second quarter.

The bank is also estimating a full-year decline of 3.1% with unemployment rising as high as 9%.