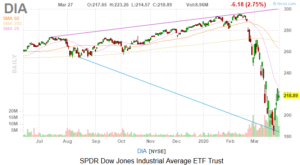 Halting a three-day winning streak, stocks tumbled Friday as investors appeared to sell the news on the House of Representatives passing the $2 trillion stimulus and as coronavirus case data grew increasingly ominous.

Likely weighing on riskier assets Friday are reports that the COVID-19 case tally in the U.S. is now above 95,000, meaning the U.S. now has far more cases than China. Of course, that’s assuming China is publishing accurate numbers, which it probably isn’t, but that’s a conversation for another time and place.

Deaths in Italy, one of the epicenters of the coronavirus, surged about 10% in a day and the past 24 hours have been deadliest period in the U.S., with the death toll reaching 265.

New York is being dubbed the epicenter of U.S. coronavirus cases, but confirmations are soaring across the country — from Nevada to Louisiana and more. The rising case count could be the result of increased testing, which is a positive because more testing allows healthcare professionals to more accurately diagnose and help those in need. However, the pressure on markets is derived from the fact that there simply is no timeline for when life in the U.S. will return to normal.

That lack of clarity gets us to an all too familiar scenario: 24 of 30 Dow stocks pointed lower in late trading.

Exxon Mobil (NYSE:XOM) and Chevron (NYSE:CVX) may be able to hold their dividends steady, but that might be the extent of the good news coming from the oil giants over the near-term because the energy sector is awash in problems that aren’t going away anytime soon.

With oil prices poised for the worst quarterly performance in three decades, producers shuttered 40 rigs this week and it appears North American producers are bracing for a significant slowdown as 2020 moves along because there’s simply too much supply and not enough demand to stoke anything more than short covering rallies in the oil futures market.

Disney (NYSE:DIS) is again proving to be one of the more coronavirus-sensitive Dow stocks. The stock was hammered today after research firm Moffett-Nathanson said Disney could lose $3.4 billion in revenue due to the closures of Disneyland and Disney World.

“Putting it all together, despite the fall in Disney’s stock price to date, we think the combination of COVID-19 impacts and an ensuing recession will cause unprecedented pain here,” said Moffett-Nathanson.

Not Liking What They See

Analysts are looking at industrial machinery makers, including Caterpillar (NYSE:CAT) and unsurprisingly, they don’t like what they see with economically-sensitive group.

CAT fell about 3% today after Bank of America downgraded the stock from “buy” to “hold” while cutting its price target to from $123 to $115. Analyst Ross Gilardi said investors shouldn’t expect energy and mining companies to rapidly boost equipment spending after the COVID-19 scenario abates.

As noted above, there were a handful of Dow winners today, but the real star was Procter and Gamble (NYSE:PG), which jumped over 6% thanks to an upgrade by Stifel Nicolaus analyst Mark Astracha.

“We view valuation as reasonable given heightened macroeconomic uncertainty, consistent free cash flow, and current 2.8% dividend yield,” said the analyst in a note to clients.

Earlier this week, I mentioned that first-quarter earnings season will soon be starting and the results are likely to be ugly. Data confirm my theory as Refinitv points out there have already been 84 negative pre-announcements among S&P 500 members compared to just 39 on the positive side.

“The S&P 500 is expected to enter an earnings recession, two consecutive quarters of year-over-year declines, starting in 20Q1 and analysts now expect to see full year 2020 earnings decline 0.2% from the prior year,” said the research firm. “This would be the first full year earnings decline since 2009’s -5.8%.”

Todd Shriber has been an InvestorPlace contributor since 2014.  As of this writing, he did not hold a position in any of the aforementioned securities.