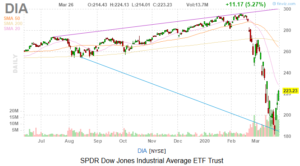 In a sign that markets can and do anticipate bad news, sometimes efficiently baking it in before it becomes official, stocks soared again Thursday even as jobless claims across the U.S. swelled to 3.28 million last week, or quadruple the prior record.

Technically speaking, the Dow is out of a bear market, a nearly unthinkable thought just a few days ago. Using the SPDR Dow Jones Industrial Average ETF (NYSEARCA:DIA) as the gauge because one cannot invest directly in an index, data indicate DIA is 21.63% above its recently printed 52-week low.

Still, there’s plenty of work to be done because DIA needs to add more than 25% to get back to its 52-week high.

Investors will take the gains, however, as Thursday marked yet another day of broad-based advances in the blue-chip index with 28 of 30 components higher in late trading.

Usually on big up days like this for the Dow, investors expect a big contribution from Apple (NASDAQ:AAPL). To be sure, the iPad maker was higher by about 3% in late trading, but that put it toward the bottom of Thursday Dow winners.

The cap on Apple’s Thursday upside was easy to spot: Wedbush analyst Daniel Ives, one of the stock’s biggest supporters, cut his price target on the name to $350 from $400 while noting delivery of 5G iPhones could be pushed back to December.

“Having one of its most important iPhone launches in its history into a consumer environment still recovering from the impact of this unprecedented COVID-19 dark storm would be a risky decision that likely gets shelved until [the] holiday season in our opinion,” said Ives in a note to clients.

For once, we can discuss United Healthcare (NYSE:UNH) outside of the lens of political risk. The managed care provider was higher by more than 6% late Thursday, putting it in the upper tier of Dow winners, on news that the company is working on a self-administered coronavirus test.

Intel (NASDAQ:INTC) impressed again in what appears to be a sympathy play scenario. Although Intel doesn’t directly compete with Micron (NASDAQ:MU), the latter’s strong fiscal second-quarter earnings, a period including some of the coronavirus situation, boosted the stock today, taking the rest of the semiconductor sector along for the ride.

After being one of the primary Dow coronavirus victims, Disney (NYSE:DIS) is steadying, ranking as one of the best-performing names in the index over the past week.

Importantly, the stock is extending gains it started accruing earlier this week after Moffett Nathanson analyst Michael Nathanson spoke glowingly about the international prospects for the Disney + streaming service.

With theme park and movie theater revenue essentially ground to a halt because of the coronavirus, Disney needs to give investors something to be excited over the near-term and Disney+ growth could be that elixir.

As noted earlier, equity markets often function as leading indicators and that may prove encouraging with the coronavirus remaining an issue for the global economy. With the exception the weekly jobless claims numbers, most of the data investors have been considering are from February.

“In terms of what will happen with the U.S. economy, we can see the slowdown happening in real time,” notes Sara Potter of FactSet. “However, due to the lag in official economic statistics, our ability to measure the economic impact is delayed. We’re just receiving February data now, and everything was still relatively rosy then.”

The last several days of equity market price action could be suggesting stocks already prepared for the worst when it comes to March’s economic data.

Todd Shriber has been an InvestorPlace contributor since 2014. As of this writing, he did not hold any of the aforementioned securities.