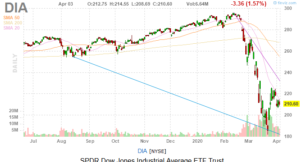 Equities slumped to finish the week as the Labor Department’s March jobs report was far worse than expected, prompting speculation that next few monthly employment updates will be as bad or even worse because of the coronavirus pandemic.

Getting back to the aforementioned jobs report, the Labor Department said 701,000 jobs were lost last month, well above economists’ forecast of 100,000. That projection was probably on the light side given that the last week of March brought more than 3 million jobless claims and that the coronavirus has led to a hiring freeze across multiple industries.

What can’t be debated is that March 2020 was the first month of lost jobs on a net basis since 2010. The jobless rate increased to 4.4%. Adding to the pressure on equities today is the pricing in of more bad jobs reports to come. As was noted here yesterday, first-time jobless claims spiked to a record 6.6 million last week, setting the stage for potentially dour April employment update.

With jobs being one of the most economic reports in the U.S., 28 of 30 Dow stocks were lower in late trading.

In late trading, JPMorgan Chase (NYSE:JPM) was tussling with UNH for worst-performing Dow stock. In the case of JPM, this appears to be a symptom of overall market weakness and reports that the bank, along with plenty of its rivals, would be unable to accept applications for the Small Business Administration’s (SBA) stimulus loans. However, JPM said later in the day it is in fact taking those applications.

Foul jobs numbers have a tendency to weigh on oil prices. After leading the Dow yesterday, Exxon Mobil (NYSE:XOM) and Chevron (NYSE:CVX) gave back some of those gains today. Analysts are tepid on oil stocks in general, but some are pointing to Chevron’s ability to protect its dividend as a positive sign.

“While the cuts don’t completely close the post-dividend outspend, the clear commitment to protecting the balance sheet, and thus the dividend, in this environment should be rewarded and we continue to see Chevron as best positioned to weather this downturn,” said Tudor Pickering Holt & Co. in a recent note to clients.

3M (NYSE:MMM) was supposed to be one of the beneficiaries of increased demand for medical supplies, including surgical masks, due to the coronavirus. However, the company ran afoul of the White House by exporting some of those needed products, earning Twitter rebuke from President Trump and a loss of more than 3% today.

To be fair, the company released a statement this morning highlighting the humanitarian implications of breaking export chains of medical masks to Canada and Mexico, as well as the potential for retaliation that could cause “the net number of respirators … available to the United States [to] actually decrease.”

To be fair, the Dow company has been increasing production to meet increased demand, but being hit with the Defense Production Act (DPA) is still a bad look.

Disney (NYSE:DIS) continues its run of being one of the worst-performing Dow names as the stock dropped 3.19% on news that its furloughing some theme park workers and that the pandemic is forcing a reshuffle of its movie lineup. So if you’re waiting on the next “Mulan” installment, you’ll be waiting until July.

If this week’s volatility wasn’t enough for investors, more turbulence could be coming as the big banks, including JPM, kick off first-quarter earnings season in earnest in a couple of weeks.

For those focusing on next week, market direction will remain beholden coronavirus headlines, meaning the U.S. desperately needs to flatten the curve and do so soon.